The Saga of Pistol Pete 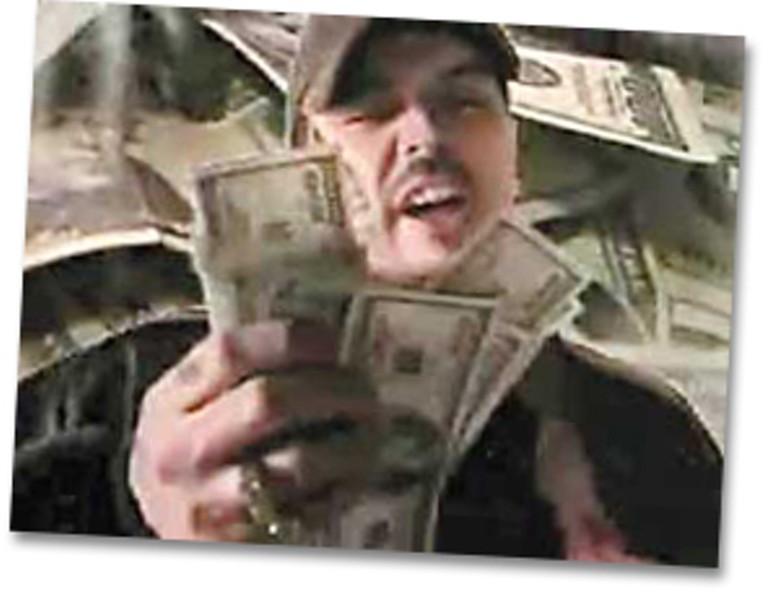 I should have seen it immediately. The clues were right there in Chris Durant's splashy piece in the Times-Standard at the end of December. The headline, "Crooks pull elaborate casino heist" was accompanied by a clever graphic with the three suspects' mug shots embedded in a slot machine. The photo of Peter Daniel Collins wasn't very big - it took a call last week from one of my son's friends to make me look at it again and realize that I know Collins; in fact I've known him for five years.

"What's up with Manifest robbing that casino?" was the question asked. When I reread the story it came to me: Peter Collins, aka Pistol Pete, is also known in Humboldt hip hop circles as Manifest, one of the most audacious rappers around, notorious for grabbing the mic at every hip hop show possible.

In case you missed the story, Collins is the alleged mastermind behind a $198,000 Halloween night robbery at Cher-Ae Heights Casino last year. Reports indicate that authorities believe Collins, initially identified as "Disguised Man," worked with Daniel Ivan Porter, a casino security guard who slipped him keys to the casino vault with the assistance of one Emily Katherine Weitzel, a former HSU softball player who used the alias "Julie Andrews." Collins and Weitzel made off with a duffel bag stuffed with the casino's cash. Porter stayed behind and was subsequently arrested, basically because the crime and a prior dress rehearsal were caught on tape by the casino's 150 camcorders.

The runaway couple was later traced to Marysville, Wash., based on clues including text messages, records of money transfers to Porter totaling $1,900 and a cell phone message machine that said, "This is Pistol Pete. Leave a message."

When they were apprehended in December authorities found a quantity of heroin, sawed-off shotguns, a pistol and a pair of pit bulls in a sports car they said Collins had just bought for $21,297 cash. According to Durant's report, "a silver briefcase with $151,495 in cash" was discovered under a bed at the suspects' residence.

Despite the drugs, guns and the stash of bills with wrappers consistent with those used at the casino, Collins and Weitzel somehow talked their way out of jail and went on the lam.

Between the nickname, Pistol Pete, and the silver briefcase, I should have recognized the Manifest connection instantly. In my first encounter with him, in March 2001, Collins was carrying a locked silver briefcase containing flyers for a show he was promoting and lyrics he had written. He had called not long after returning to Humboldt from the East Bay insisting I had to meet him because he was about to "take Humboldt hip hop to a new level."

When we met in the parking lot of the Bayshore Mall (his idea), he spoke of his childhood in Oakland living with adoptive parents, of a rough-and-tumble "life on the streets." As he told the tale, it eventually led to being shot by an undercover drug agent at the tender age of 16. (He has a scar to go with the story.)

At that point, his parents decided the streets of Oaktown might not be the best place for him and sent him to live with an aunt in Humboldt County. In due course he found his way into the local rock scene with a Humboldt band called Lakota and took on the nickname Pistol Pete. Eventually returning to the East Bay, he discovered hip hop and when he came back to Humboldt once again, his plan was to take the local rap scene by storm.

A couple of years later he called again, this time hyping a Eureka loft he called The Overground where he was throwing a CD release party for a disc titled Northyrn Lytes.

Following the disc came the requisite video illustrating an autobiographic track, "Life of Grindin'," which he considered the album's single. The song, with lyrics and music by M.C. Manifest, directed by Pete Collins, bounces through several styles of rap. Manifest is shown in a library, in front of a graffitied wall, in various clubs, rapping on the stage at Reggae on the River, surrounded by dancing women, surrounded by money, and behind bars, as he rhymes, "I don't wanna get locked up clocking on the hustle. Living the lush life, they got me flexing every muscle. Whether the clouds are gray or the sun is shining, I got to take what's mine because I'm livin' the life of grindin'." (www.youtube.com/watch?v=dqmcowi1q8w)

An acquaintance from that time described Collins as "a wild and crazy guy. Every time he came around there'd be antics. He could talk people into anything, he was such a smooth talker, a smooth criminal."

Noting that Manifest was "always living the fast life" and often had no fixed address, he said the rapper was "forever on the grind -- he never really had any money," but emphasized that his life was not without focus. "He was always dealing with music," said the friend.

My own dealings with Manifest were typically in connection with music, desired coverage of a new disc or some big show he had planned. An example: a concert at Mazzotti's in Arcata in October 2004 he called "Hip Hoptoberfest," bringing together rappers and DJs from the East Bay and those from the local hip hop scene.

Describing the show, he also spoke with a strange pride of his position as "Humboldt's Most Hated," explaining that the term came from a series of posts regarding his music and his character on a Humboldtmusic.com web forum.

"The things they were saying were so appalling, everything from accusing me of murder, to I've never made an original song, to I don't do shows - which is funny because I do do shows, and I'd say I'm about as original as it gets," he related. While he pleaded "100 percent not guilty" on the murder allegation, he seemed to embrace the notoriety.

Next time I ran into him was on the Arcata Plaza, summer 2005. The African band, Djialy Kunda Kouyate, led by the Kouyate twins, had a crowd at the Farmers' Market mesmerized, when who should come along but Manifest. True to form he talked his way into a guest rap slot, dropping freestyle rhymes on the spot about the market, about vegetables, about what he was doing at that moment. He connected with the crowd and with the band, and when Djialy Kunda Kouyate toured Senegal last summer, Manifest went with them.

"We played this giant show at Theatre Nationale Daniel Sorano in Dakar. It's like the Carnegie Hall of Africa," he told me when he came to town for yet another CD release show last September. Since Africans love rap, he had also ventured off independent of the twins and even signed a deal with a Senegalese music distribution company. "They don't get any live American hip hop over there," he said. "My video went into regular rotation on the government TV station. People loved it. I was thinking of staying; I'm definitely going back."

By all accounts the Mazzotti's show celebrating the release of his disc Autobiograffiti was a raging success. It took place just six weeks before his alleged involvement in the casino robbery.

As he noted on his MySpace page (/manifesthumboldt), he was planning a return to Africa, followed by tours of Japan and Europe. "Also on the horizon ... compiling a collection of his favorite and most notable songs, working on a series of live recordings he's made of strictly underground hip hop concerts in Humboldt County, a few mix tapes and a short feature film."

Where is he now? Your guess is as good as mine. Police authorities report that Emily Weitzel has turned herself in to authorities in San Francisco; her attorney suggests that Collins may well do the same. As we go to press, though, Manifest is still at large. And the plot for that feature film is still developing.