Many Hats (and Roller Skates)

From government to the environment to music and the military in Humboldt, Natalie Arroyo has her foot in it or on it — figuratively and literally.

One place that has special significance to her is the Eureka Waterfront Trail, the newly completed 6.3-mile contiguous trail that runs north from Herrick Avenue to Tydd Street.

"Since I'm the president of the Humboldt Trails Council, play roller derby and skate outside to work out, plus I am in the Coast Guard and on Eureka City Council," Arroyo said, "the trail is a convergence of all these things."

Miami-born and Florida raised, Arroyo moved to Humboldt when she was 22. She came to work as an AmeriCorps National Service member with the Watershed Stewards Program in Petrolia after Hurricane Katrina devastated New Orleans and botched her plans to attend graduate school at Tulane University. The detour became a life-changing adventure.

"I had never lived anywhere so rural," Arroyo said. "It took only a few months to fall in love with the community."

Twelve years later, she proudly calls Humboldt home and is deeply invested professionally and personally. She's lived in Petrolia, Arcata and, for the last 10 years, Eureka, where she bought a home in 2013. "Eureka neighborhoods have incredible Victorians and Craftsman homes on par with other cities like Portland," Arroyo said, and it's "more affordable than other coastal cities in California." And, she said, "not everything cool has been done yet up here." 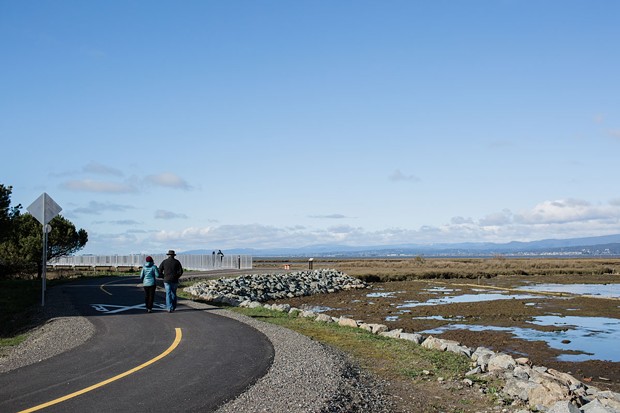 For newcomers moving from bigger, more diverse cities, there can be some culture shock. "Demographics are shifting and more people of color are in the county," she said. "The trend in the last few years is so noticeable. ... It's exciting to have new communities here."

Arroyo thinks it's the people, culture and our natural environs that make Humboldt special, including "a live and let live culture that's very rich," she said. "It has an outlaw quality to it. There are a lot of people here marching to the beat of their own drum. It's nonstop fascination."

As for the landscape, she said, "The natural beauty here is so breathtaking. Here we can go to the beach, the trees, the outdoors and it won't be packed with people."

In 2014, Arroyo, then 29, was elected to the Eureka City Council — the first Latina to serve on council (she is a proud Puerto Rican). At the time she took her seat, and for two years after, she served on an all-female city council, one of few in the country. She now serves as representative to Ward 3 (following Eureka's recent redistricting).

Arroyo holds many titles and positions in the community that reflect her environmental, artistic and athletic interests, some notable ones include: senior planner with Natural Resources Services division of Redwood Community Action Agency, lecturer at Humboldt State University (she teaches environmental conflict resolution), and as a marine science technician with the U.S. Coast Guard Reserve. She also proudly adds her 2011 Rutabaga Queen G-Ma title, member/vocalist of the all-female band Blood Gnome and one-woman musical act Smilebright, and roller derby player with Humboldt Roller Derby to the list. True to Humboldt citizenry, she personifies eclectic interests.

"I'm a lot like my dad and try to do new things. He ran marathons around the world — but in costume," Arroyo said. "He was also heavily into public service."

How she manages: "I like to do a lot of things. I like to have a lot of plates spinning," she said. "I'm not rolling in the dough but it is exciting to me. I feel like I'm living my dream life."

For the outdoors: Eureka Waterfront Trail (Arroyo likes to pick it up near Blue Ox Millworks, 1 X St., Eureka). Sequoia Park and Sequoia Park Zoo (3414 W St., Eureka) are gems for families and adults alike. The 67-acre park has walking and biking trails situated among redwoods. In the summer, look for live theater on the grounds. Arroyo said the zoo is one of the longest-running little zoos in the country and meets high accreditation standards.

For lodging: The Inn at 2nd and C (139 Second St., Eureka) is a boutique inn housed in an Eagle House Victorian in Eureka's historic district. It's also a live music and entertainment venue.

For eats: Humboldt Bay Social Club's Lobby Bar is a must for anyone who wants to grill their own oysters and watch the sun setting over the dunes (900 New Navy Base Road, Samoa). Esmeralda's has tasty chile rellenos (328 Grotto St., Eureka). Brick & Fire has a snazzy mushroom cobbler (1630 F St., Eureka).

For laid-back drinks: The Shanty (213 Third St., Eureka) has an eclectic vibe with cheap cocktails plus ping pong and pool tables. Ernie's (608 A St., Eureka) is a small neighborhood spot for drinks and darts.