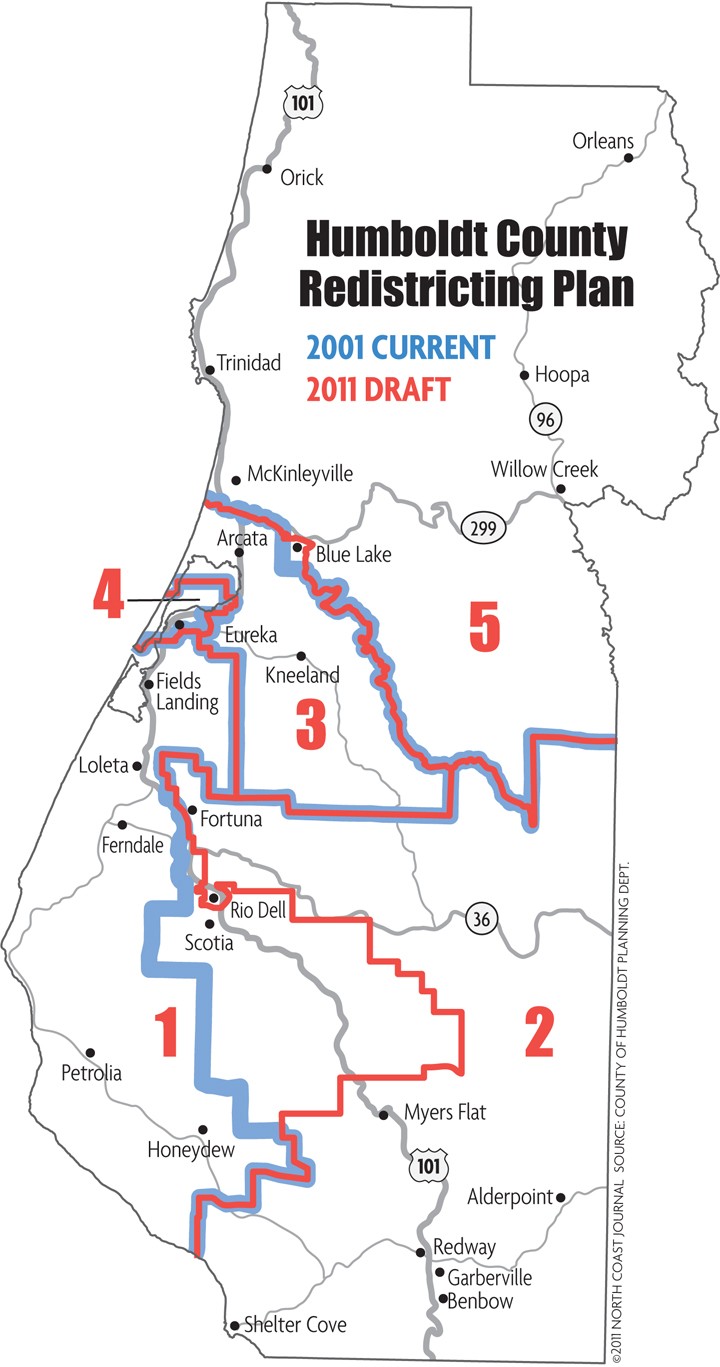 Redrawing the jagged, meandering lines that define Humboldt County's five supervisorial districts is no mean feat. There are a number of complicated criteria -- not only the region's geographic and municipal boundaries but also finicky rules laid down by the state and the feds. These rules say each district should be contiguous (meaning no little jurisdictional islands off by themselves), compact (no long, squiggly peninsulas) and more or less equal in population. Plus they need to accommodate "communities of interest," which means grouping together areas where residents share social and economic interests, similar living standards and use the same transportation facilities, among other factors. And all these criteria need to be satisfied simultaneously.

The team currently assigned this brain-twisting task consists of Humboldt County Clerk-Recorder Carolyn Crnich, Sheriff Mike Downey, Assessor Mari Wilson and District Attorney Paul Gallegos. Over the course of nine public hearings, four committee meetings and a series of community workshops, these four officials (who are elected countywide and thus politically unaffected by the boundaries they create) have attempted to draw up new districts while factoring in community input and data from the 2010 Census.

The county's population dispersal has changed over the last decade, with growth focused primarily in the inland areas of Southern Humboldt (the current Second District) and in and around McKinleyville (the Fifth). With so many variables to consider, the committee found that equalizing district populations again wouldn't be as simple as moving a couple of lines. "As I said at most of those meetings, it's like squeezing a water balloon," Crnich explained Monday. "You get it just right over here, and it's bulging out over there."

On Tuesday of last week the redistricting committee submitted to the Board of Supervisors what it considered its three best draft maps, each of which took a markedly different approach to splitting up the county. One draft divided SoHum horizontally and took Blue Lake out of the northern Fifth District, giving it to the Arcata-centric Third. Another map made SoHum's First District massive, stretching from Ferndale down to Garberville (grabbing Rio Dell and Scotia along the way), then back up to incorporate Blue Lake. The third option was the least radical, though it made some curious alterations, like splitting the neighboring towns of Scotia and Rio Dell between the First and Second districts and, again, putting Blue Lake with Arcata in the Third.

This game of political Twister has many county residents concerned. Denizens of Southern Humboldt have argued throughout the redistricting process for a unified, all-rural district. They reason that rural concerns are often given short shrift by the more urban-focused board. Third District Supervisor Mark Lovelace has reservations about the all-rural approach. "If we try to have any of our districts be homogenous, to where we only have a rural voice or only an urban voice, only right or only left, then we're setting ourselves up for factionalism," Lovelace said by phone Monday. "I don't think that's a good idea." Maintaining a diversity of interests within each district helps its residents and representatives relate to each other, he said.

One of the trickiest factors in all this is the math. Humboldt County's 2010 population was tallied at 134,623. Divided by five that would put 26,924.6 people in each district (we'll round up to 26,925). Of the three maps submitted to the Board of Supervisors Tuesday, the one chosen for further fine-tuning was the third option mentioned above. It came very close to achieving equal population distribution. The biggest deviance, Crnich said, came in the Fourth District, which covers the vast majority of Eureka. It had 61 too many people.

The Supes asked for further adjustments to the map to smooth out some ragged boundaries and accommodate requests from the public. Lovelace said he'd like to see adjustments made to the boundary between the Third and Fifth districts, which currently doesn't follow either of the two intuitive geographical boundaries -- the Mad River and Hwy. 299. The board also told the redistricting committee to try moving the town of Weott out of the First District (which includes Loleta, Ferndale and Petrolia) back into the Second, where it has been for years.

It remains to be seen just how the county's new districts will affect next year's supervisorial elections, though one candidate in particular may need to go back to the drawing board. Back in June, community youth leader and auctioneer Rex Bohn, who lives in the Pine Hill neighborhood of Eureka, announced his bid to replace First District Supervisor Jimmy Smith, who has said he's not likely to run for reelection. But under the current version of the proposed map, Bohn's neighborhood has been drawn into the Fourth District. Bohn could not be reached for comment before deadline.