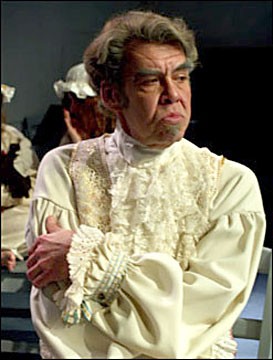 Presenting Marat/Sade this season at North Coast Repertory Theatre was an inspired decision. As directed by Peter Brook in 1964, this play by Peter Weiss was an international sensation. I recall listening spellbound in my college campus coffee shop to a young professor's description of the 1965 Broadway production. But though it was revolutionary and influential, it became a kind of forgotten '60s period piece. When it was occasionally revived, it seems sometimes to have become an excuse for excess and sensationalism. But Michael Thomas, NCRT's executive director, who chose the play, directs it with both economy and theatricality, perfect for the venue and the North Coast audience.

This production illuminates the play itself, which speaks to us now with amazing vitality. Though its apparent subject is the French Revolution, the political conundrums resonate today: issues of war, torture, change, class, deception and self-deception, power and principle, fraternity and individual liberty.

What we see on stage has some historical basis: Jean-Paul Marat was a major figure in the French Revolution, in later years confined to his bath because of a skin disorder, and assassinated there by a stranger, Charlotte Corday. The Marquis de Sade did in fact stage plays with his fellow inmates at the Charenton insane asylum. Weiss imagines de Sade dramatizing Marat's last days and death for an "enlightened" audience expecting to see a safe history play performed by the inmates, each with a particular (or perceived) mental disorder, as part of their rehabilitation.

Peter Brook describes the virtues of this play very well in his book, The Shifting Point, as "constant movement that goes back and forth between the social and personal views" — between "the superficial aspects of life and its most secret ones," between "everyday and heightened language" leading to "the unbroken conflict between impressions and judgments," illusion and disillusion. These effects are partly enhanced by the play's funhouse mirror aspects: We are watching actors in 2008 playing mad people in 1808 (when Napoleon had "saved" the Revolution by becoming its dictator and European conqueror), trying to be actors in a play about 1793. And we are simultaneously part of that 1808 audience, peering through the bars of the asylum, and the "enlightened" 2008 audience.

The play permits these effects through a mix of styles — of comedy and drama, with songs as musical description, character expression and ironic counterpoint. There's also the tension of madness in the players. Will it control them (and the action) or will they control it?

But those elements are only potential until orchestrated and expressed by a superior production like this one. A simple but mesmerizing set and fine ensemble acting — a credit to the director and the commitment of the actors — lay the groundwork. Individual performances send it soaring: Kimberly Hodel as the narcoleptic patient playing Charlotte Corday, Lonnie Blankenchip as the Marquis and especially James Read in a masterful performance as Marat.

The patients swirl around, now comic, now dangerous, mimicking a confused populace or a bloodthirsty mob. Heath Houghton as a kind of narrator, and the singers Darcy Daughtry, Melanie A. Quillen and Calder Johnson, who function sometimes as chorus, sometimes as clowns, keep the action moving forward. The instrumental trio of Candida Wolff-Vodden, Dianne and Pete Zuleger, provide superior accompaniment for the precise singing. Meanwhile, without moving very much, Blankenchip and Read circle around each other in a dance of ideas, tested by bitter experience. The drama in this play is in the words so diction is important, and this cast speaks clearly and expressively, in a dynamic range from shouts to whispers. And there's plenty of stage business to keep the eye involved.

All of this means that you don't just think about the ideas in this play after you've gone home, you follow them — you feel them — moment by moment, back and forth, as the play happens. This is a production to experience, and to remember.

This past weekend Humboldt Light Opera concluded its brief run of Souvenir, a two-hander about Florence Foster Jenkins, a self-financed singer notable for being terrible — the William Hung of her time, though her concert and recording career lasted 32 years. As staged by Jean Bazemore, the play hits some fascinating notes, about the relationship of inner and outer beauty, and the vulnerability of artists with something to express but unsure of whether they are any good at expressing it. With shades of black and tan, and a glow around silhouetted skyscrapers outside the window, Gerald Beck's set easily evoked 1940s New York. Kevin Richards was charming and convincing as the accompanist Cosme McMoon, and Carol Ryder was luminously "bad" as Mrs. Foster Jenkins, who did in fact sing at Carnegie Hall and died a few days later. "Toscanini sent flowers," McMoon tells us, and though the play goes on for another five minutes that said it all for me.

Coming Up: A busy weekend ... This Saturday, Redwood Curtain presents Zounds!, a staged radio event ?† la A Prairie Home Companion (at 8 p.m.), along with drinks and dinner (at 5:30 p.m.) at the Wharfinger Building. Clink Rebik and James Floss are co-directors. You can also hear it, oddly enough, on the radio — KHUM, to be exact. Check RedwoodCurtain.com for details. Dell'Arte is presenting a one-weekend reprise of Golden State, their Californicated version of Moliere's The Miser starring Joan Schirle, before it goes to L.A. for a month. It's in the Carlo Theatre Thursday, Friday and Saturday at 8 p.m.

North Coast Prep's Young Actors Guild begins a two-weekend run of The Crucibleand Twelfth Night at Gist Hall Theatre on Thursday (northcoastprep.org), and Ferndale Rep begins 12 Angry Men with a preview on Thursday and opening night on Friday. More here next week, and always at StageMatters.blogspot.com.