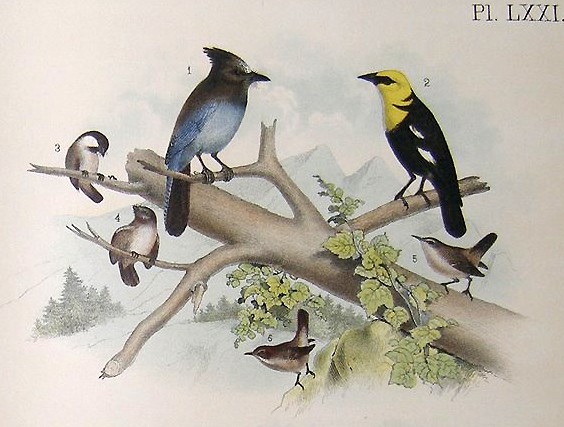 March 10. The birthdate, in 1709, of Georg Wilhelm Steller, the man for whom the Steller's Jay is named. He joined the second expedition of Vitus Jonassen Bering, which was to explore the Siberian coast and the west coast of North America. A storm and ill health forced Bering to turn back; he perished on an island in what is now the Bering Sea. The ship was destroyed in the storm. Steller, along with the surviving crew, had no choice but to remain on the island and build a new ship from the wreckage of the old, then sail it home. In addition to his carpentry work, Steller managed to find time to observe the island's natural life, making observations on the activities of sea cows and claiming to have discovered a sea ape, a creature with the head of a dog, the tail of a shark, and a body covered in thick, shaggy hair. No one else on the island saw the sea ape, nor has one been sighted since.

March 11. This may or may not be the day that John Chapman, also known as Johnny Appleseed, died in 1845. In his old age he was known as a peculiar fellow who would wander about barefoot and half-naked. He picked up old clothes when he could, and was known to cheerfully go without basic necessities, believing that the more he suffered in this life, the less he'd suffer in the next. He is believed to have entered the next world by way of an insurmountable case of the winter plague.

March 13. Daylight savings time begins at 2 a.m., making it, at that very moment, 3 a.m. We understand that this system has something to do with the efficient running of trains, and we are entirely in favor of trains. People also change the batteries in their smoke detectors on this day. We are also firmly on the side of smoke detectors.

March 14. Scientists have discovered a previously unknown chemical reaction that occurs when chrome yellow paint is exposed to ultraviolet light over long periods. The yellow pigments turn brown; this effect is even more pronounced in combination with barium and sulfur, two pigments used in white paint. The experiments have helped explain the noticeable browning of some of Van Gogh's sunflower paintings, which he created to decorate the spare room when Gauguin came to visit.

March 15. The Ides of March was a pleasant enough day, one of twelve such ides that came and went each month at the full moon, until that day in 44 BC when Julius Caesar was stabbed 35 times in the Senate. Remember, today, that the Ides of March have come, but they are not yet gone.

March 16. Beware not only of the Ides of March, but of men eating Honey Nut Cheerios.