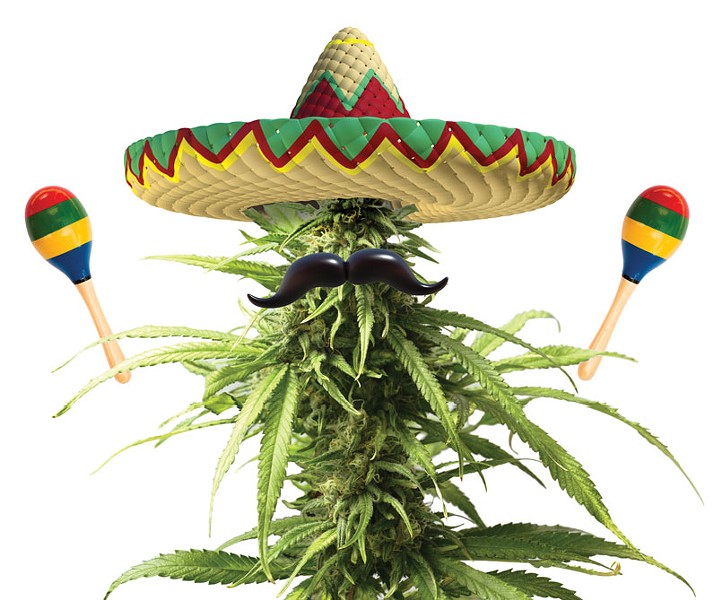 OK, this marijuana is racist.

Last year, I watched a room full of white people cheer as a white grower told a panel of white lawmakers that the word "marijuana" was racist.

It wasn't the first time I'd heard that particular line of thinking, and certainly wasn't the last. It's been repeated by many in the industry, from gentle reminders at public meetings to blog posts from Oakland-based weed heavyweight the Harborside Health Center. It's gaining purchase in government circles.

At the aforementioned meeting — the Gavin Newsom visit to Garberville in May of 2015 — Assemblyman Jim Wood addressed the speaker shortly after his comments. "We hear you," he told the crowd, assuring them he would trade the odious M-word for a safer alternative. He's generally making good on that promise; the titles of his recent bills shaping the medical marijuana landscape all refer to cannabis.

But another panelist pointed out how the word "marijuana" is woven into the tapestry of our culture. Indeed, many upstanding organizations — whose monikers rely on "marijuana" — have fought for patient access to medical marijuana and common-sense reforms to pot laws: NORML and the Marijuana Policy Project, for example. And existing laws and governance rely heavily on the word.

Should organizations cling to a racist word simply out of tradition or because changing it might lead to confusion? Of course not. See: a Certain NFL Team.

It's not a problem that people are being sensitive to perceptions of racism. That's a good thing — as long as the movement and the outcomes are just. But the word war against marijuana is so unnecessary, so misguided and such a waste of effort that it's frustrating to behold.

First of all, the word marijuana is not by definition racist. It does not refer to a person. It is not a portmanteau of some bygone racist terms. What seems to have started this trend is a handful of takes looking at the origin of the war on drugs.

As we all know, marijuana can go by a long list of names. As the industry budded, the acts of growing, possessing and using marijuana grew more specialized. Language's natural inclination to change and grow, coupled with the necessity to hide marijuana culture from authorities, has yielded a vast bounty of regional nicknames, slang, titles and other vernacular oddities. It's pretty cool, honestly, and somewhere a graduate student is pitching a thesis advisor to trace the twists and turns of pot language.

The leading train of thought against "marijuana" seems to indicate the term's common usage — and there's no question it's the most common term for weed in the U.S. — has its roots in racist manipulation.

The L.A. Review of Books somewhat hazily summed up that theory:

"A certain faction considers marijuana itself pejorative and racist, based on a longstanding theory that narcotics agents in the 1930s chose that word over the more scientific cannabis when crafting drug laws; the word is of Mexican-Spanish origin and thus, the belief is, sounded more exotic and sinister."

That marijuana prohibition was born out of racism — a desire to crack down on African-Americans and Latinos during the Jazz Era — is well-documented. Prohibition and enforcement of pot and other drugs proved to be an effective Civil-Rights-Era tool of control, as evidenced by this revelation from a Nixon administration official recounted in 1990s but not reproduced until recently: "We knew we couldn't make it illegal to be either against the war or black, but by getting the public to associate the hippies with marijuana and blacks with heroin, and then criminalizing both heavily, we could disrupt those communities."

And the continuing racism of prohibition is evidenced in copious reporting from the last decade, during which vast tracts of data were able to unequivocally show that people of color — who use drugs at the same rates as white people — are systematically punished for drug crimes at far higher rates.

These are very real problems that decimate communities, and talking about them — and shouting about them to our lawmakers — should never be seen as a fad, a PC-trend, an empty gesture. But for the most part, in my several years of North Coast marijuana reporting, systemic racism in the drug industry and enforcement worlds is not what people are shouting about. Which makes the "marijuana is racist" cry that much worse.

It's easy to imagine that during the Reefer Madness days, authorities sought to turn the general public against pot by giving it a foreign sounding name. Those kinds of campaigns still exist, unfortunately, but they prey on the racism of the populace. "Marijuana" — which directly translates to a common name, Mary Jane — is not a racist term, it's a word that played on the racist and xenophobic undercurrents of that era's public zeitgeist.

So, I've wondered for some time, what makes a bunch of farmers so focused on the injustice of that word? Is saying "marijuana is racist" just an easy way to feel good about oneself in an unjust world? Maybe. It's more difficult for people to stand up and say people convicted of drug felonies shouldn't be barred from the medical marijuana industry. That would be a far more effective act, but it's also far more politically odious, and requires a lot more courage. (For the record, I have seen people call for more meaningful action — it's rarer, but it's out there, and they should be applauded).

I think there's a more insidious notion behind "marijuana is racist." I think it's motivated by desire to whitewash weed. It's not an effort to confront racist laws and practices that continue to levy outsized punishments on this country's minorities; it's a desire to make marijuana sound safe again. It's playing directly into the very same racist undercurrents that continue to flourish under prohibition today.

Marijuana is still a hard sell — for all the talk about shifting perceptions, nearly half of California thinks marijuana should still be illegal. If marijuana advocates can rebrand it, can get the industry, the media, the lawmakers and the public to stop saying that scary, Spanish-sounding word, they'll have a much easier time convincing the public to go for legalization, to have recreational pot shops on bustling downtown street corners.

This all may sound cynical, but why else would a small farmer in Garberville care? The marijuana industry in California, Colorado and Washington has largely benefitted from the white privilege that allows it to avoid detection, prosecution and imprisonment and gives its ranks' ability to stand up and shout anything about marijuana to a panel of lawmakers.

So, please, white people, focus your energy on more meaningful ways to open the industry to people of color and women. Really think about why you've taken up a cause, what its long-term impacts may be.