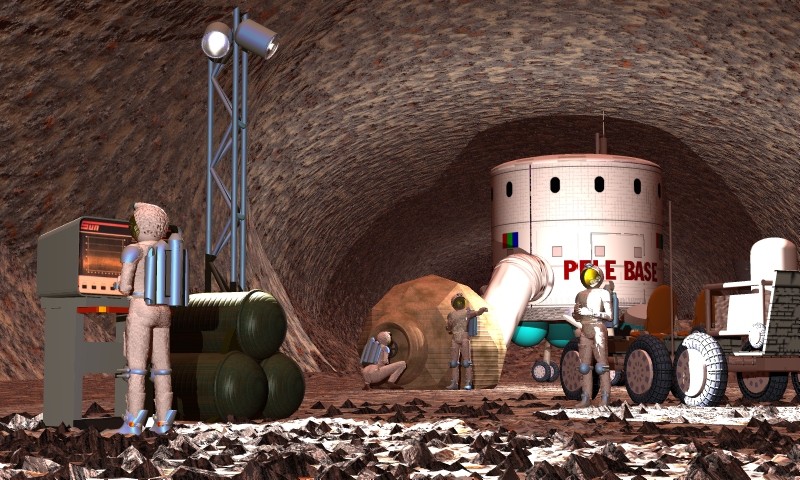 After decades of popular-press articles, a serious proposal to start the colonization of Mars with one-way missions has been published in a peer-reviewed scientific journal. In a recent issue of the Journal of Cosmology (journalofcosmology.com/Mars108.html), physicist Paul Davies (Arizona State) and geologist Dirk Schulze-Makuch (Washington State) make a strong case for sending two two-person teams to Mars -- and leaving them there. With the prospects of return missions currently stuck on the drawing board -- we can't even get back to the moon, let alone Mars, under NASA's over-cautious safety-at-all-costs philosophy -- they propose that if we're going to go anywhere in space in the next decade or two, Mars is the destination and one-way is how it's going to happen.

The idea is to send two pairs of physically and psychologically fit 60-somethings to Mars in twin spacecraft, where they would set up basic living quarters in a lava-tube cave (to shelter from cosmic rays, since Mars lacks the ozone layer and magnetosphere which protect Earth). Preceding them, robotic missions would have landed the essentials: solar/nuclear generators, the basics for agriculture, vehicles and sufficient food and supplies to last for a year or two. After landing, priorities for the foursome would include setting up a greenhouse for growing fresh food; obtaining water from ice and subsequently breaking it down into hydrogen (for fuel) and oxygen (for life support); and assembling a plant to recycle human waste.

The pioneers would be in constant touch with Earth -- much more so than, for instance, New World pioneers were with Europe, who also (for the most part) had no illusions about returning home. Subsequent missions would boost their numbers until "the colony's population might have expanded to about 150 individuals, which would constitute a viable gene pool to allow the possibility of a successful long-term reproduction program," according to the paper. Children born on Mars would be Martians, since they would be ill-adapted to return to Earth's gravity (nearly three times that of Mars).

A one-way trip would be relatively low-cost, perhaps 20 percent of the cost of a return mission. In addition, astronauts would avoid the arduous rehabilitation required to readapt to Earth's gravity after a couple of years in low gravity (Mars) and zero gravity (getting there and back).

NASA was quick to criticize the paper. "We want our people back," said spokesman Michael Braukus, meaning that if the venture is going to happen, the private sector will have to come up with the estimated $50 billion (equivalent to 40 space shuttle missions). Wealthy entrepreneurs like Richard Branson (Virgin), Elon Musk (PayPal) and Jeff Bezos (Amazon) are already involved in space ventures. Such visionaries might be inclined to support what will inevitably be billed as a one-way "suicide mission." Which, come to think of it, is the mission all of us are on anyway, someplace between birth and death.

Barry Evans (barryevans9@yahoo.com) thinks NASA should skip the moon and focus on establishing a permanent base on Mars. His books, including the first 80 Field Notes, can be found at Eureka Books.