Mary Jane: The Next Generation 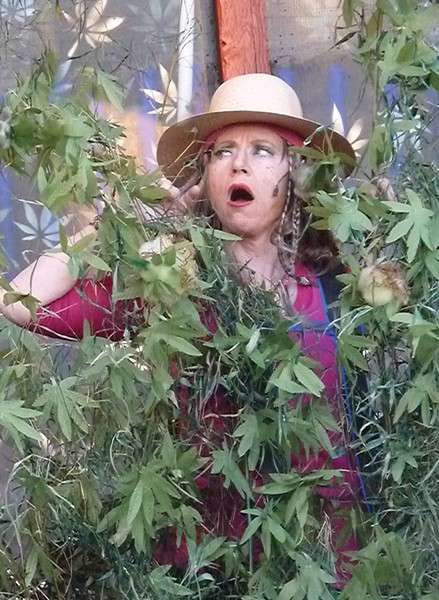 Last summer's Mary Jane: The Musical was a box office success that many more people wanted to see than could, so bringing it back this summer made sense -- especially with recessionary blues still playing in the background. It was also an opportunity to shape a sharper evening, as well as add some new songs and more dancing.

So Mary Jane, Queen of the Emerald Ball, returns with most of the original cast in a show about the business and culture of cannabis in Humboldt. Mary Jane: The Musical 2012 is now onstage in the outdoor Rooney Amphitheatre at Dell'Arte in Blue Lake.

They're back: the Humboldt Honeys, the Bollywood finale with Pratik Motwani, Tim Randles' "Why Is Whiskey Legal and Pot Is Not" and an even sweeter, breathtaking duet by Joan Schirle and David Powell on Lila Nelson's "Grow Inside." There are elaborate, acrobatic new dance routines choreographed by Laura Muñoz. Joan Schirle (as Mary Jane) is again a better world's bona fide Broadway star. But for all the energy and exuberance, the content tips towards a darker assessment.

Dell'Arte's call to the public to contribute ideas for this year's edition resulted most specifically in a new song, "The Trimmers' Flamenco" by Tim Randles, about the women employed to trim the outer leaves from the cannabis buds. Other comments, especially relating to Mary Jane's song about her son, led to major new themes: the effects on children as well as legacies and responsibilities for the future.

There's not much nostalgia this time. It was pretty much over in the pre-show song set, with Powell's powerful singing of the John Lennon wordless vocal center of "A Day in the Life," and its innocent ecstasy and wistful wonder as well as the pain of awe and longing, those foregone possibilities. Mary Jane replaces reminiscence with reevaluation, seeing a kind of Gold Rush of exploitation leaving "a wreck behind." Last year she introduced old friends who bantered about their common past. This year those friends are moving on and away.

What they leave behind is the devil or the deep blue sea -- the black market greed of "The Industry" or the legalized corporate greed of "This Bud's For You" (both songs by Scott Menzies). Either way, it's the rule of "Green Like Money" (by Zuzka Sabata): "I'm false like smoke/I'm empty hope." But if "the pot bubble pops," it's a "Ghost Town" (by Joani Rose).

When Mary Jane's estranged son appears and she meets her infant granddaughter, the focus moves to the effects on the next generation, as in Sabata's new song "Officer and Child" about being taught to lie and hide. "Innocent no more" -- a phrase in this song repeated in Randles' "Nightmare" -- might be this year's subtitle.

But the voice of experience is not hopeless, and as in many ancient and modern myths, it is the elder who guides to the future. Mary Jane rallies in an eloquent final speech: "I am tired of living in the shadows. ... I am tired of profit over people. ... My mantra is: never leave your consciousness at the door."

The introduction of a son and grandchild cries out for human interaction and emotion, but I felt a lack of that in the opening night performance, as well the usual spontaneity. Otherwise this is a more cohesive, confident, resonant and haunting update, as well as upping the entertainment quotient. Michael Fields skillfully guided the script and staging, Daniel Spencer is scenic designer, Lydia Foreman the costume designer, and Michael Foster designed lighting. Musical director Tim Randles, joined by players Marla Joy, Mike LaBolle and guitarist Dan Perez, comprised the ever-excellent band. Returning members of the dashing cast not yet named are Ryan Musil, Zuzka Sabata, Joyce Hough, Janessa Johnsrude and Meridith Anne Baldwin, joined by Jacob Trillo. Fred Neighbor didn't return, and he and his character are missed.

That's the review, now the weather: In the previous 21 years of the Mad River Festival, the outdoor show was rained out only twice. But that number was equaled opening weekend with a complete rainout Friday and a move indoors Saturday. Producing director Michael Fields says he makes the decision to cancel by 6:30 p.m. and it gets posted on the Dell'Arte website. If it rains during a performance, he'll likely end it then. Because of all the electrical equipment necessary for this show, it can't be quickly moved inside (as a 2008 performance of Tartuffe was -- one that Fields remembers as the best of the run). If the show is cancelled, ticketholders get a raincheck.

Coming Up: If you're reading this Wednesday (June 27) you can still catch the final performance of Exit 101, an evening of song, storytelling and discussion on end of life themes, at Dell'Arte's Carlo Theatre at 7 p.m. -- part of the Mad River Festival.

The Fest continues with The Prize of Hope presentation to performers Geoff and Dan Hoyle on Saturday, June 30, before Mary Jane, and Red Light in Blue Lake cabaret July 6. More at dellarte.com.