A great mountain bike trail off State Route 36 — and you can hike it, too 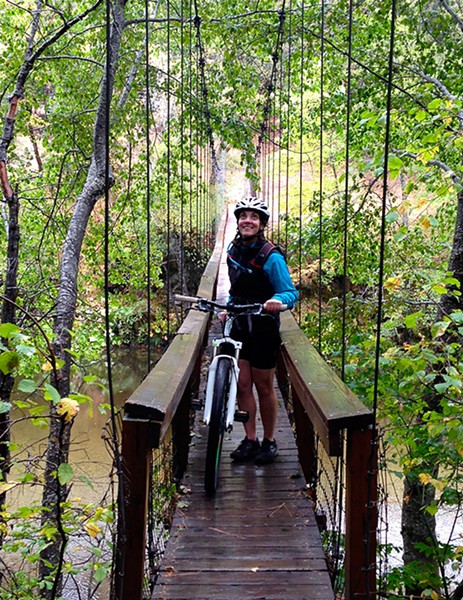 Photo by Jon o'connor Amy Cirincione, beginning her ride at a suspension bridge that crosses the Trinity River.

I met my husband on the Deschutes River, where we guided a group of (at-risk/delinquent) teens through rapids for a week. We measured the next four years of our courtship in miles of whitewater rafting, hiking and rock climbing. Initially it seemed so romantic, falling in love against a wilderness backdrop. But eventually, the unfortunate truth emerged. The activities I preferred — backpacking, sea kayaking, cross-country cycling — bored my now-husband to tears. The kinds of trips he loved — Class 4 rapids and single-track mountain biking — scared the bejesus out of me. When I proposed a multi-day backpacking trip, Jon replied, "Why would I want to carry all my stuff on my back and eat dehydrated food when I can throw my gear and a cooler in the raft and end my day on a beach with a beer?" I mumbled something about endurance and simplicity and put my pack back in the closet.

Over the years, we've learned to compromise. I go on lower-key rafting trips with him; he hikes with me if the following criteria are met: the hike takes a half-day or less and ends at a swimming hole, a peak with a view or another rewarding destination. Meanwhile, I backpack and cycle with friends who enjoy my brand of grueling moderation.

Two weeks ago, I planned a late-season backpacking trip up Stuart's Fork in the Trinity Alps. But when my friends backed out, I wasn't comfortable doing an extended trip in a new area by myself. I knew Jon would never go for a three-day expedition, so I started looking for other options I could do solo. I considered the Rogue River trail, which runs from Grants Pass to Gold Beach along the river. It's spectacular in the late summer and early fall, but it's a hefty drive and the shuttle costs were daunting. Instead I found a poor man's Rogue River trail: The South Fork National Recreation Trail along the Trinity River.

The trail begins at the Scotts Flat Campground, just off Highway 36 in the town of Forest Glen. It was originally a hunting and traveling trail for Native Americans, and then a wagon road used by cattle drivers and pack trains during the Gold Rush. The trail is now a little-used hiking trail that extends from Scotts Flat for 7.2 miles to the mouth of Smokey Creek. Most hikers camp here and turn around the next day. But the trail continues an additional 10 miles to Double Cabins and has ample camp sites, so the trip could easily be three days. The trail is known for its remoteness and its moderate elevation gain, making it accessible for beginning hikers and families.

The idea of a long, remote, non-dramatic hike deeply appealed to me. Jon and I met while working at a wilderness therapy company in Oregon, he as a rafting guide and me as a therapist. I've spent months on end hiking in the backcountry in silent reflection with teenagers, with nothing to distract us from our own thoughts but sweeping vistas and sore legs. I started my packing list.

When I showed the trail map to Jon, he noticed the length and the grade, and asked, "Why don't we mountain bike it?" Because I am a practitioner of the gracious art of marital compromise, I agreed to explore the trail on wheels instead of on foot if it meant having fun outside with my husband. We decided to ride the first half of the trail to Smokey Creek and then evaluate if we had the time, energy and light to complete the second half.

I am not a bad-ass mountain biker. I do well up steep hills (due to masochism and strong legs), but on downhills I grip the handlebars and tense up instead of letting the bike and my body roll through the curves. I tend to envision myself face-planting or flying off a cliff on every tight turn. But the trail looked mild on the map, so I figured I was up for it.

It took us about two hours to get to the trailhead from Eureka. The weather was overcast and we drove through several rain showers. We were the only vehicle at the trailhead parking lot on a Sunday morning. The trail begins on a narrow suspension bridge that spans the Trinity. We scooted our bikes across the bridge and were able to begin the ride on the other side of the river. The trail is well-graded and relatively wide and flat initially, and it snakes along, above and periodically through the river. Some of the streams had split-log footbridges across them, but we rode our bikes through most of them. Jon did this gleefully, and then coached me through the first few crossings. "Downshift! Pedal hard!" By the third crossing I was a champ, and Jon recorded me shrieking with pride on our camera. That film will not be available on the NCJ website.

The clouds parted around mile three, and we stopped for lunch on a gravel bar in the river to dry our gear. We talked about our work in the wilderness, reminiscing about other cold, wet times — setting up shelters in the frigid, high desert, digging fire pits deep in the snow of the Cascades, and rowing for miles against the wind through canyons. It's always fun to talk about those times while warming your backs in the sun.

After lunch, we rode for another two miles up a gradual but persistent incline into wooded bluffs until we were viewing the river from above. The trail narrowed as we ascended, and we were steadily working. We arrived at a trail sign that proclaimed Smokey Creek to be three miles away. As we examined the map, the skies darkened and it started to rain. If I had been by myself, I would have pushed through to our pre-decided destination. Would it have been pleasant to ride in the cold and the rain? No, of course not. But I am an outdoor masochist.

Fortunately, my husband's high-adrenaline adventures have taught him to end his days at "peak fun." He looked at the time (2 p.m.), looked at the sky, looked at the map, and then at me. "I think we should turn around here," he said. I had a few flashes of guilt, but my ultimate emotional response was relief. I was exhausted.

It was only as we rode back that I realized how steep the incline had been on the way in; we practically flew back to the trailhead. Even a non-bad-ass mountain biker like me can appreciate the joy of whizzing down a hard-earned trail. I finally relaxed my shoulders and trusted the bike to navigate the tight turns. We zoomed through the creek crossing in what was now a downpour and arrived back at the truck covered in mud and rain, but gleeful. Peak fun obtained.

If you would like to write a Get Out! Column, please email Journal editor Carrie Peyton Dahlberg at carrie@northcoastjournal.com