Massive Conspiracy Against All Life 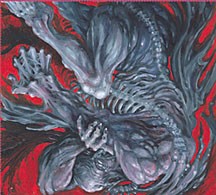 Leviathan, aka Wrest, is a one-man black metal project from the Bay Area that has played a crucial role in the development of American black metal, bringing a sense of legitimacy to a scene that for years was perceived to be inferior to its Scandinavian counterpart. Massive Conspiracy Against All Life is Leviathan's first full-length effort of new material since 2004. And as those already familiar no doubt know, this release has a difficult history tied up in various legal wranglings as well as some of Wrest's personal struggles and demons.

A majority of Leviathan's recordings have been haphazardly released as either demos, split releases or compilations of earlier work, marking Massive Conspiracy Against All Life and its fully realized vision as a fitting testament to the range and development of Wrest's grim genius. The album, per usual, is a moody affair hinging on dramatic combinations of discordant rage and somber melody with Wrest's signature tropes present from the very beginning. Rumbling passages burst into locust-swarms of buzzing guitars that churn and pummel mercilessly; bomb-blasting tempo changes explode through thick walls of storming rhythms; dragging funeral dirges are decimated by angular guitar chords; and the echo of strangled exhalations and maimed howls reverberate through each track. The album reflects a blackened and futile world of tortured human existence, one that pricks at the darkest recesses of Wrest's mind, exposing the deepening levels of alienation and misanthropy that have come to define him.

Leviathan has always been able to exist in a carefully negotiated space that accommodates invention and technical proficiency without betraying black metal's raw primordial roots and treasured lo-fi aesthetic. Tracks like "VI-XI-VI" and "Receive the World" rip and tear with loathsome ferocity yet still provide opportunity for ambient interludes, atonal exploration and minimalistic experimentation to weave their way through Wrest's maze of primal riffage. With all aspects of his musicianship tightly bound together, Wrest succeeds in creating a work that exceeds expectations set by Leviathan's much-revered The Tenth Sub Level of Suicide and Tentacles of Whorror, an accomplishment that speaks well to his cult credentials as he is able to both maintain and transcend genre boundaries.

Most black metal bands attempting to compose a work of this magnitude — the album's seven tracks clock in at more than an hour — tend to fall victim to monotonous song structures and pointless noise mongering. However, Wrest's affinity for the disparate yet calculated layering of sound points to subtle and manipulative intricacies that set him apart from his contemporaries. On "Vulgar Asceticism," arguably Leviathan's most impressive musical achievement to date, guitars contort and bend, almost as if strings are slipping in and out of tune. The song is unsettling in its shaking warble and dissonant chord phrasings. It's a spinning vortex of nightmares. Wrest's vocals fight desperately against a rising sea of chaotic black fuzz. Drums thrash and pound with a darkening fury as unworldly ominous drones create undercurrents of anxiety, ultimately submitting to a warped tremolo-picked melody that wavers its way to song's end.

Sadly, many self-proclaimed defenders of underground black metal will likely decry Leviathan's latest effort, for its inevitable ascendancy into metal lore will certainly draw new hordes of followers to the scene. It's an unfortunate summation, for Wrest's contributions to American black metal have proven to be too valuable for such simple and pretentious dismissal. And if Massive Conspiracy Against All Life does indeed, as it is widely rumored, end up being Leviathan's final farewell, then it deserves to be recognized as the consummate achievement that it is.