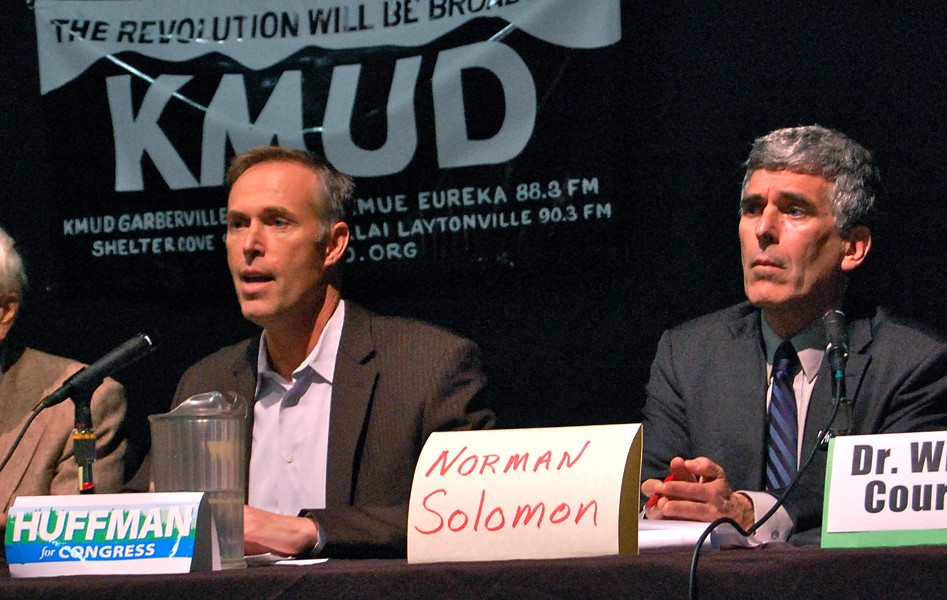 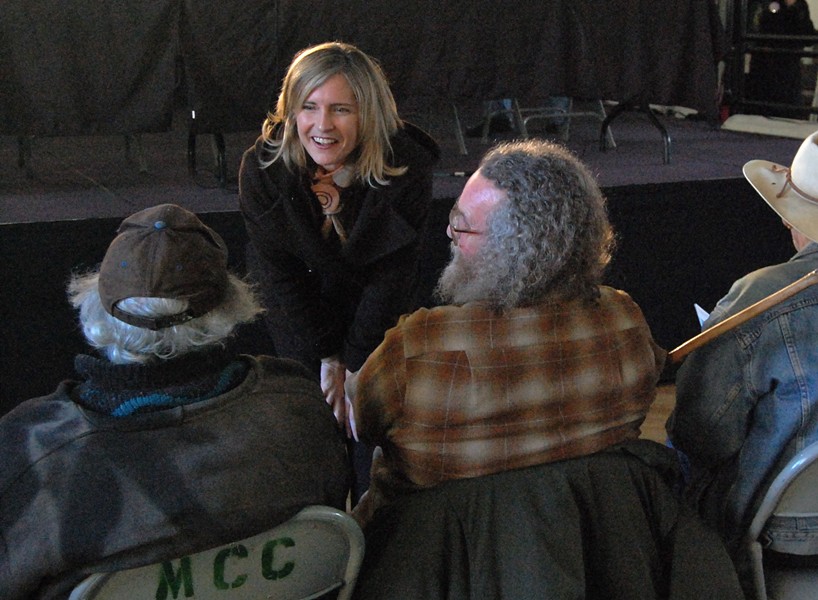 Southern Humboldt residents prepared to receive a max dosage of Congressional candidates on Sunday as they gathered for a 10-person, three-hour slog of a debate at the Mateel Community Center.

Who wants a button? The pre-debate meet-and-greet served up a when-worlds-collide spectacle. Well-groomed candidates rubbed elbows with the less appearance-concerned among their potential SoHum constituents. Indoors, a string quartet trudged earnestly through Mozart's Eine kleine Nachtmusik while cheese and wine were served. Occasionally, when the entrance door opened, ganja smoke and the sound of motorcycle engines wafted in. Hopeful candidates set up modest tables replete with campaign literature and swag. Likewise, local activists advertised right back at them with "Save Richardson Grove" and "No Nukes" signs.

Impressively, the event -- organized by Maiden Humboldt and broadcast on KMUD radio -- was able to attract every known candidate to little Redway. And even unknowns! Presumed candidate and Mendocino County resident Brooke Clarke -- whose name had not appeared on any advance promotional material -- heard about the debate a week or so ago and decided to make the drive up and plead his case to be able to participate in person.

Did we mention it was a slog? With 10 candidates on the stage and everyone afforded equal time to answer every question, time crawled.

Moderator Ed Denson asked, "Do you support the Supreme Court's decision that corporations are people?" They all answered "no," but, you know, longer.

Denson: "Do you support the labeling of genetically modified organisms in food products?" They all essentially answered "yes." See above.

Denson: "Do you believe in climate change?" Mostly "yes," but Roberts said he thought the "science needs more work."

With their progressive credentials established, things turned weed-ward. All candidates on the stage were in favor of some form of legalization. Republican Roberts said he believed people should have "freedom of choice" even if the two days he'd spent in SoHum prior to the debate had provided something of a culture shock.

"I think I smelled something funny earlier today! Does that shock you?" he wondered. "It shocked me."

There was no shortage of passion on this subject. Adams co-chairs the California State Association of Counties Medical Marijuana Working Group, along with Humboldt County Supervisor Mark Lovelace. Caffrey is a medical marijuana patient. Courtney has made it the cornerstone of his campaign.

"I will defend this plant," Courtney promised, vowing to go toe-to-toe with the Obama administration over what he sees as an issue of state's rights. "This is not a federal issue."

Courtney sees the potential of medical marijuana as a major financial boon for the region.

"Humboldt as a brand identity is worth millions if not billions of dollars," he said. "This is a product which could provide more jobs and provide benefits across the globe."

Solomon also sees potential for marijuana to be an economic stimulus, but urges caution moving forward.

While also a proponent of decriminalization, Huffman was more open to working with the feds to agree on regulations that both sides are content with.

"The rest of this country is a long way from supporting decriminalization," Huffman said. "We need to bring the federal government into a partnership with California."

He hopes that the federal government will continue working with the state in cracking down on illegal growing operations.

"We need to have public safety while we promote a sensible medical marijuana framework," Huffman concluded.

There is no doubt that new 2nd Congressional District will be blue come November. Hugging the coast from the north end of the Golden Gate Bridge through HumCo and up the Oregon border, it captures its largest sections from the California's former 1st district -- represented by Democrat Mike Thompson -- and the Marin-heavy 6th district -- represented by retiring Democrat Lynn Woolsey. Marin has not had a Republican representative since 1974.

At this point, Huffman has to be characterized as the strong front runner and the chosen one of the region's Democratic power players. He's already secured the coveted endorsements of Thompson, Sen. Dianne Feinstein and Assemblyman Wes Chesbro, as well as a slew of other lefty political and environmental groups. In short, Huff looks tough.

But who will he face in November after June's new open primary whittles the field to a regardless-of-party two? Back in October 2011, an article published in the Santa Rosa Press-Democrat essentially characterized the lead-up to the primary as a "race for second place." citing a pair of (really, really early) commissioned polls that showed Huffman with a significant lead but with a second tier of progressive candidates.

Solomon's campaign staffers countered with their own poll that saw their guy do slightly better: Huffman with 16 percent; Roberts with 12 percent; Solomon with 11 percent; Adams and Lawson with 4 percent; 46 percent undecided. But again, it's really early.

As the seemingly second place-polling progressive, Solomon has been taking Huffman's campaign head-on. Other than a brief quip from Susan Adams about Stacey Lawson's comparative wealth, the only significant exchange between the candidates came when Solomon tried to assert himself as more-grassroots-than-you, making the charge that Huffman had taken significant corporate donations.

"I've raised money for the Democratic party," Huffman responded to the allegation that, while an Assembly member, he'd taken donations from Chevron, Wal-Mart and PG&E. "I'm not ashamed of that."

Despite being arguably the highest-profile candidates in the race, however, Huffman and Solomon weren't the stars of the night in the eyes of the audience. Even though he's unlikely to get much attention in November -- due to, of course (insert your American electoral process injustice here) -- Garberville activist Caffrey drummed up the most impassioned crowd responses.

Among the crowd pleasers: "Without marijuana this place would be Alabama ... This building wouldn't be here," he said.

"I will fight so hard," Caffrey said, before choking up with emotion and noting that he is a medical marijuana patient. "I will never ever let the federal government take our medicine away."

"It will be an incredible failure of the entire hippie generation if ya'll die without legalizing marijuana," he said, easily gaining the loudest applause of the night.

After the debate went off the air and a few candidates had already left the building, Maiden Humboldt founder and event organizer Dave Sky took to the stage and shouted the results of an impromptu straw poll of those in attendance that evening.  For what it's worth, here are the results of the "Emerald City" mock caucus: Andy Caffrey, 15; Stacey Lawson, 5; Normon Solomon and Tiffany Renée, 4; Jared Huffman and Dr. William Courtney, 3; Susan Adams and John Lewallen, 2; Dan Roberts, 1; Brooke Clarke, 0.