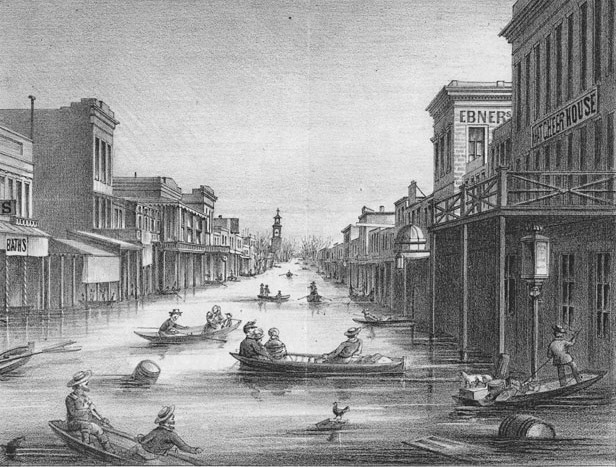 The Humboldt Redwoods State Park visitor center at Weott has a fine display, including newsreel movies, telling the story of the 1964 "Christmas flood." It focuses on Eel River communities, such as Myers Flat, Weott, South Fork, Shively, Pepperwood and Stafford, all of which were essentially wiped out by floodwaters. However, those December rains also affected most of the Pacific Northwest, including virtually every major stream and river on the West Coast. Portland was especially hard-hit, when the Willamette overtopped the city seawall. Back here in Humboldt County, the Christmas flood caused $100 million in damage.

The 1964 flood was nothing compared with the last real flood suffered by Californians. That was in 1861, when the Central Valley turned into a 300-mile-long by 20-mile wide Central Sea. Thousands of people, and a quarter million head of cattle, died. Sacramento was flooded for six months, prompting the Legislature to move temporarily to San Francisco, while the state went bankrupt. Now that was a flood.

Except it was dwarfed by the flood of 1605. Haven't heard of it? No one had, until climate researchers started comparing hydrological evidence from various parts of California. Their chilling conclusion, as reported in January's Scientific American ("The Coming Megafloods"), is that not only do huge floods occur on the West Coast on a regular basis -- once every 200 years or so -- but that, thanks to global warming, their intensity is likely to increase. That's bad news for the 6 million people now living in the Central Valley.

The evidence for huge and regular prehistoric floods comes from multiple sources. Among them are: core samples taken off the Santa Barbara coast, where ancient flood-borne sediments can be read like annual tree rings; radiocarbon dating of sediments in marsh cores from around San Francisco Bay; gravel flood terraces at sites in the Klamath basin, including Indian Scotty campground (on the Scott River) and Eagle Creek campground (on the Trinity); and sediment cores taken at Little Packer oxbow lake (near Willows), which only floods when the Sacramento River overtops its banks. What struck the researchers was the consistency of the data from these far-flung sites. Within the margins of error, they found evidence for truly huge floods occurring, on average, every two centuries.

They attribute these floods to newly discovered phenomena: eastward-flowing "atmospheric rivers" from the Pacific. Such "rivers in the sky" bring to the West Coast up to 15 times as much the water as the Mississippi River carries. They flow in a 250 mile-wide layer of very humid air, about a mile above the ocean. They're not all bad: Most years, atmospheric rivers supply up to 50 percent of California's precipitation in the span of 10 days, including our well-known "pineapple expresses" from Hawaii.

According to the Scientific American article, "six out of seven climate models [predict] the average rain and snow delivered to California by future atmospheric rivers increases by an average of about 10 percent by the year 2100." Given that we're hit by megafloods on average every 200 years, and that the last one was in 1861, we might want to reconsider our current California tendency to build on floodplains and live alongside riverbanks.

Barry Evans (barryevans9@yahoo.com) thanks Dr. Lynn Ingram of UC Berkeley, co-author of the Scientific American article referenced above, for help with this column.