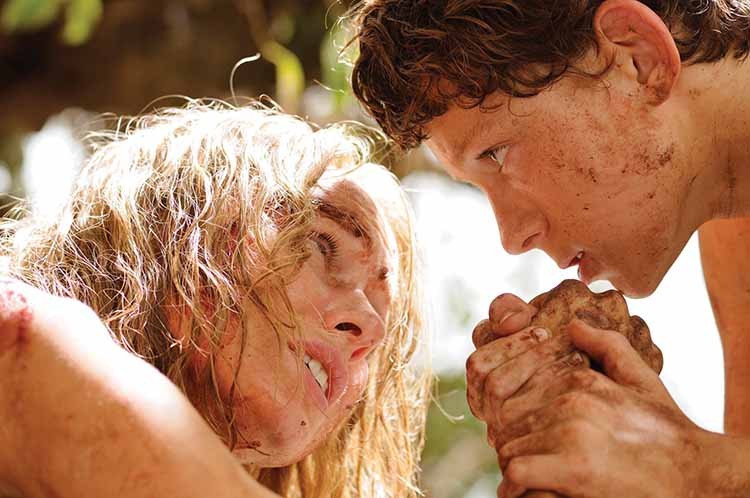 THE IMPOSSIBLE. The movie's opening paints a placid, warm portrait of privileged family life. The attractive Bennett family arrives at an idyllic Thai beach resort, where they intend to spend Christmas. Then a wall of dirty water devastates the landscape and throws the family into a desperate effort to survive and reunite.

In the wake of the disaster, mom Maria (Naomi Watts), gravely wounded, and eldest son Lucas (Tom Holland) find each other and manage to make their way to a drastically overwhelmed hospital. They have no way of knowing whether dad Henry (Ewan McGregor) and younger boys Thomas (Samuel Joslin) and Simon (Oaklee Pendergast) are alive or dead, much less where they might be. The movie builds on this central question in an ever-escalating, often heartbreaking maelstrom of tension, despair and near-misses.

Based on the real-life experience of a Spanish family during the 2004 tsunami that killed more than 230,000 people and displaced nearly 1.7 million others in Southeast Asia, The Impossible combines stunning visual effects, seamless editing and raw-nerve performances to breathtaking effect. Naomi Watts, Oscar nominated for this performance, defies expectations, and Holland carries his scenes with the self-assuredness and courage of a seasoned veteran.

With the first distant rumble of waves, director J.A. Bayona (The Orphanage) creates an atmosphere of merciless intensity that never recedes. The tsunami sequence, an astonishing combination of computer generated imagery and practical effects, sweeps us up along with the protagonists. This set piece establishes the movie's pace and tone: Even at rest and hopefully out of harm's way, post-traumatic stress and dreadful anticipation weigh heavy on every character.

There are moments that cynics (of which I am usually one) could call out as maudlin or pandering. The orchestral score swells in a way that expects a Pavlovian response, but Bayona keeps the narrative grounded, maintaining a delicate balance between the sentimental and the authentic. In the moments leading up to the climax, a woman near me in the theater wept openly. I can't say I blame her. PG. 114m.

BULLET TO THE HEAD. What do you expect? The big lummox who sat directly behind me, and then made a series of phone calls, really enjoyed it -- mostly the gratuitous gunshot wounds and bare breasts. Don't get me wrong, I enjoy those things, too. But I also like good stories; this doesn't have one.

Jimmy Bonomo (Sylvester Stallone), a contract killer with an incongruous ethical code (what decent murderer doesn't have one?), gets stiffed on the bill for a job, and then his partner gets killed. He teams up with a fish-out-of-water police detective (a likeable but miscast Sung Kang) to kill everybody involved, most of whom are New Orleans power players. Jimmy throws around a lot of casual anti-Asian remarks, the generic blues soundtrack blares, and the climactic fight sequence involves a mercenary and fire axes.

It would require supreme inventiveness to turn this boilerplate script into something new and different. Director Walter Hill (The Warriors, Brewster's Millions) is not possessed of that trait. Stallone knows how to fill a screen, and he's enjoyable to watch, though he's certainly not for all tastes. But even for a fan, he can't fill the vacuum of story and style that is Bullet to the Head. R. 91m.

WARM BODIES. Sixteen-year-olds rejoice: a romantic comedy about zombies! It's a movie wrapped around a machine that manufactures money!

To be fair, the voice-over narration (by lead actor Nicholas Hoult) is generally pleasant and quirky. Rob Cordry lends some comedy cred. And there's Malkovich. The attitude of the storytelling feels pretty genuine, un-cynical. A shame the story it tells is predictable and bland.

In the wake of the zombie apocalypse, the survivors of a nameless American city have created a walled-off stronghold downtown. Corpses and Skeletons control the outlands, using the airport as their gathering point. R (Hoult), a nerd-corpse with a tendency to introspection, falls for Julie (Teresa Palmer) after he eats her boyfriend's brain. Unfortunately for him, Julie's dad (Malkovich) leads the war against the corpses, so their dating life is pretty strained. But her feelings for him gradually begin to reverse his zombification.

Warm Bodies has competence and style but never produces enough laughs or scares to get anywhere. The young cast members do solid-enough work, but the story they service is too familiar, too blandly linear. PG13. 97m.

RUST AND BONE. Single dad Ali (Matthias Schoenaerts) moves to Antibes with his 5-year-old son. An occasional brawler, he gets a job as a nightclub bouncer, where he meets wayward orca trainer Stephanie (Marion Cotillard). After losing her legs in a whale incident, she remembers his kindness and calls on him to help her out of despair and loneliness. Their unlikely friendship becomes a casual sex arrangement. Ali starts fighting for money, and Stephanie discovers that she enjoys it.

Rust and Bone is a meditation on the bond forged by two damaged people trying to make their way. Undeniably well-made, impeccably acted and challenging, Jacques Audiard's (A Prophet) latest doesn't surprise or captivate as much as it is intended to. It succeeds for the most part, but I found my attention drifting during the overlong third act. R. 120m.

SIDE EFFECTS. This is allegedly the last Steven Soderbergh movie that will ever play in theaters. The Oscar-winning director of Out of Sight, Erin Brockovich, Traffic and the Ocean Eleven series has announced that he's retiring from filmmaking. (His final film, barring a Jordan-style un-retirement, will be a biopic about Liberace on HBO.) This thriller, starring Rooney Mara, Channing Tatum and Jude Law, takes on the prescription drug industry. R. 106m.

IDENTITY THIEF. Jason Bateman, master of playing the long-suffering everyman, stars as a businessman who hits the road to track down the woman who stole his identity. But it turns out that the woman (Melissa McCarthy) is something of a loose cannon. Throat punching comedic hijinks ensue. R. 111m.

HYDE PARK ON HUDSON. In this stately comedy, Bill Murray plays FDR, with Laura Linney as his wife Eleanor. In June 1939, with Europe on the brink of war with Germany, the first couple hosts the King and Queen of England for an awkward weekend in upstate New York. R. 94m.

Ocean Night returns to the Arcata Theatre Lounge Thursday with Surfing for Life, a documentary about senior surfers. Doors at 6:30 p.m.  The following night, revel in the surreal Beatlemania of director Julie Taymor's fantastical 2007 musical Across the Universe. PG13. 133m. Sunday's family feature is the Pixar insta-classic Finding Nemo (2003). G. 100m. 6 p.m. And finally, next Wednesday's Sci-Fi Pint and Pizza Night will feature Ed Wood's comically disastrous 1956 film Plan 9 from Outer Space, a perennial contender for the worst movie of all time. 6 p.m.

DJANGO UNCHAINED. Quentin Tarantino's Blaxploitation western about an avenging slave in the antebellum South is the most audacious and entertaining film of the year. Starring Jamie Foxx, Christoph Waltz and Leonardo DiCaprio. R. 165m.

MAMA. Jessica Chastain (Zero Dark Thirty) stars as an aunt nurturing her two nieces, who have just reappeared in a decrepit cabin after being missing for years. Supernatural scares ensue. PG13. 100m.

MOVIE 43. A solid candidate for worst movie of the 21st century, this all-star debacle features Oscar-winners debasing themselves for no apparent reason. R. 97m.