Metal Crab on the Waterfront 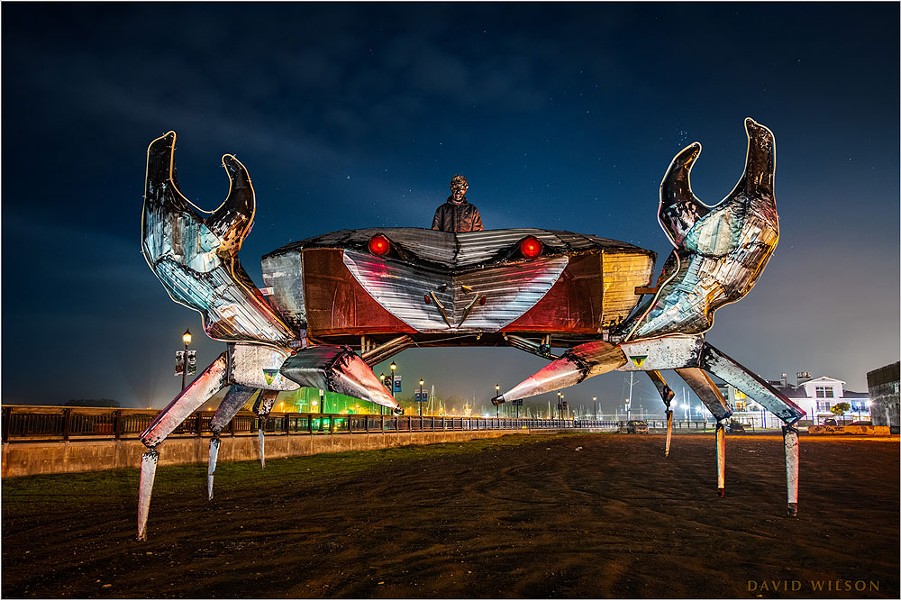 Photo by David Wilson A 14-foot tall, 24-foot wide metal crab kinetic sculpture by Daniel McCauley and Al Hoffman rests down at the Eureka Waterfront. McCauley is in the turret, wearing a welded metal mask he also made. The light-colored tubing outlining the pincers is neon flexible tubing that is brilliant when lit, but it was not powered for this shot. Dec. 2, 2020, Humboldt County, California.

Photo by David Wilson No, you won't see this beast in the Kinetic Sculpture Race, for the crab, while kinetic in its many movements, depends on the old Ford for locomotion. And it would sink. Dec. 2, 2020, Humboldt County, California.

You may have driven through Eureka and spotted this metal marvel where it lives behind a chain-link fence, dreaming of adventures past and future in the outer world. I have. What is it? Does it move? I wanted to photograph it the moment I saw it. And now that I have, I want to again. It's calling to me.

When I got wind that Daniel McCauley, one of the crab's two creators, was going to be down at the waterfront with the crab, I reached out. We had worked together before; in March of 2020, I photographed his full-scale welded metal stag standing beneath the stars and used the images in a story called "Metal Buck Beneath the Stars." This time he had his crab down at the Eureka Waterfront for some kind of top-secret movie documentary, about which I know nothing other than we can look for it sometime in the spring of 2021.

I showed up about sundown and he was at the crab. He was pulling on a couple of cables —

CLANG! Went the other.

With each pull, they clapped together with an ear-splitting bang.

Grabbing another set of cables, he pulled and danced like a marionette, and the crab's eight appendages jumped and worked at his commands. Like a giant living crab, its legs flailed and struggled to reach the ground. My childhood self was terrified. But I felt safe, for it was held firmly in the grip of a mightier beast — an old Ford Ranger — and the legs and pincers swung harmlessly in the air.

Indeed, in its current form the crab does not walk on the ground under its own power. While all eight of the decapod's appendages move, it cannot walk on them and depends on the truck for locomotion.

It was a huge hit while at Burning Man, where it was affectionately dubbed the "Scuttle Shuttle" for the sideways shuffle it had when the truck rolled. Between the lower deck and the upper "VIP area/DJ stage," it was able to transport about 15 people out on the Playa.

But more than a shuttle, the Decapodium, as the giant crab is named, was made to be a sound stage and has a sound system that shakes the ground. McCauley and his musician friend Al Hoffman built the crab to be a mobile "podium" on which Hoffman would make music to entertain the masses at Burning Man. While Hoffman played, McCauley operated the eight moving appendages to the beat. It was wildly popular.

With the COVID-19 pandemic raging, there are no immediate plans to bring the beast out into the public. But we will see it in the wild again when the coast is clear. And remember to look for it in the mysterious documentary that is coming in the spring of 2021, about which I know nothing more.

To keep abreast of David Wilson's (he/him) latest photography or purchase a print, visit www.mindscapefx.com or follow him on Instagram at @david_wilson_mfx and on Twitter @davidwilson_mfx.