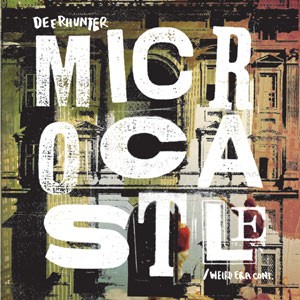 Listening to the Atlanta-based band Deerhunter, you wouldn't immediately suspect that the band has endured a great deal of drama. Yet it has. In 2004, prior to the recording of their first full-length album, Deerhunter (subtitled "Turn It Up Faggot"), the band's original bassist, Justin Bosworth, died due to head injuries suffered from a skateboarding accident. Deerhunter's recording session in 2005 for their second full-length in Brooklyn (at Rare Book Room Studios), engineered by acclaimed singer-songwriter Samara Lubleski, disintegrated. Due to the encouragement of fellow Georgia-based band, The Liars, Deerhunter went into a small studio in Athens, Ga., and re-recorded the tracks in only two days. The result was Cryptograms, for which the band earned considerable critical praise.

After a number of lineup changes, the band, led by vocalist and multi-instrumentalist Bradford Cox and drummer Moses Archuleta, followed with their most accessible and strongest release to date, Microcastle. As opposed the ambient textures of Cryptograms -- which gave the recording a dense, yet foggy, overall sound -- Microcastle is clear, pushing the song, the melody and lyrics to the forefront. The industrial textures are still there, but exist underneath the mix. The result is surprising.

Elements of The Pixies, My Bloody Valentine, Echo and the Bunnymen, Guided By Voices and even Lush feed into Microcastle. There's definitely a strong pop influence, with psychedelic touches, on a majority of the songs, something only hinted at in their previous release. Ironically, the band recorded Microcastle (and their limited-edition EP, Fluorescent Grey) at the same place where they made that disastrous attempt at recording their second album, Rare Book Room Studios. However, this time around Deerhunter sounds assured, focused and tight, while the instrumentation is produced cleanly. Cox's vocals float atop Lockett Pundt's fluid fuzz guitar lines, while Archuleta's drums propel the upbeat rhythms, creating a nearly joyous atmosphere.

The song "Never Stops" begins with a simple bass and guitar line accompanied by a snare drum, with Cox's voice nearly echoing a Devendra Banhart-like stylization, allowing the darker edges of ambient and industrial feedback to seep through in its chorus. The title track and the album's final song, "Twilight at Carbon Lake," employ 1950s/early 1960s mid-tempo balladry, similar to bands like the New York Dolls, who used the Shangri-La's, among others, to weave their own garage sound. Deerhunter never oversteps these influences, using them as enhancements to their already established sound.

Perhaps by recording Microcastle at the scene of the crime of their failed second attempt, Deerhunter may shake off their demons and internal drama. Yet, like the protagonist in Rainer Werner Fassbinder's film Satan's Brew, who goes through a series of masochistic experiences to produce a gleaming work of art, Deerhunter's frontman Bradford Cox may need his own drama to create such a satisfying document.