Mike's Drive Up to Shut Down

After 79 years and three generations of owners 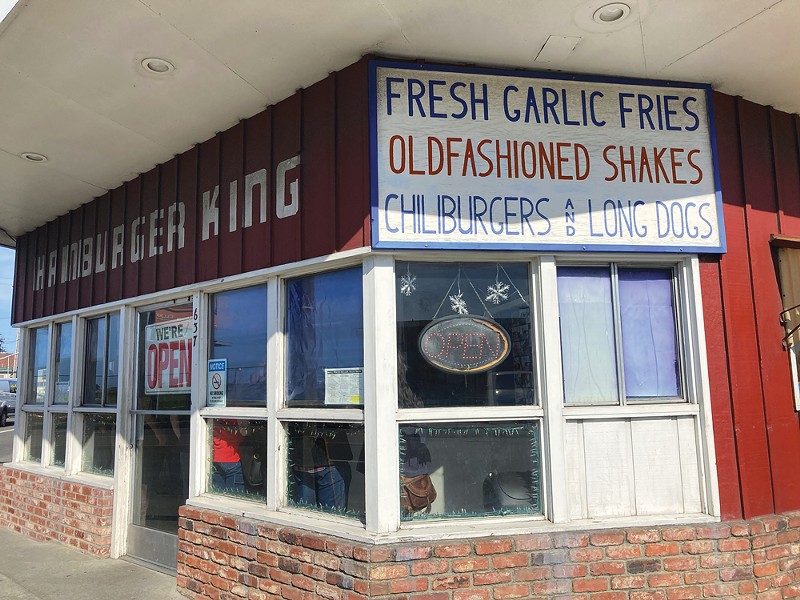 Photo by Jennifer Fumiko Cahill The unchanged exterior of Mike's Drive Up.

Photo by Jennifer Fumiko Cahill James Carpenter and Jamie McBride work side by side in the kitchen at Mike's Drive Up.

Photo by Jennifer Fumiko Cahill Anne Carpenter takes orders during a slammed lunch hour after the announcement that Mike's is closing.

Photo by Jennifer Fumiko Cahill Photos from Mike's Drive Up's past and present on the wall at the restaurant.

Lunchtime is usually busy at Mike's Drive Up, the low, unassuming wood and brick hamburger joint on Broadway and Seventh Street in Eureka. But today, patrons stand elbow to elbow with their backs to the front windows, holding scraps of hand numbered paper as they wait for their chili dogs, garlic fries and milkshakes. Some are regulars; some are here because they've heard it's closing.

When former boxer Mike Householder first opened the business that still bears his name back in 1943, it was a trailer on the street near where the Broadway Cinema sign stands. "He was a colorful character, from what I understand," says James Carpenter, who owns the business today with his wife, Anne. Householder moved into the building at Seventh Street in 1956, and nobody has messed with the exterior or the chili since.

"The food has not changed," says Carpenter. "The menu was pretty much the same from the beginning, all the same recipes. ... My wife and I had the most changes because we added bacon ... that that was like, whoo!" Carpenter's grandparents Lewis and Virginia Caldwell bought Mike's from Householder in 1970 — a photo of Lewis in a paper hat and red checked shirt is tacked to the wall up front. Their children Frank and Sherry Carpenter took it over in 1987. That's when their son, 17-year-old James, started helping out with the family business, and he's been working there continuously ever since, eventually taking ownership eight years ago.

After the bacon, the most notable change was the décor. While some of the word puzzles are still up on the back wall, the bulk of the signs and posters, some of which espoused Reagan-era right-wing views that, for many, came to define the character of the place, have been replaced with sports memorabilia. "My dad's previous stuff was more politically based and I didn't like that. I always thought the restaurant should be less contentious. I like the sports theme more. I guess sports can be contentious, too," says James Carpenter. "There were definitely some people who took offense ... you can include me, as well. I didn't like everything. But I wasn't in charge."

James Carpenter pivots wordlessly between shifting hissing burgers on the flat-top grill and spooning meat chili onto a hot dog, then wrapping it in paper with a little tourniquet-like bow and sliding it into a bag that will spot orange if you don't get to it soon. Beside him in the tiny kitchen space, employee Jamie McBride works the fryer, unflinching when his fingers touch the roiling oil. He dumps the fries into a brown paper bag that resembles worn oil cloth and hits them with a couple shakes of salt and a cloud of garlic powder before giving it a vigorous shake. It's the smell of those fries, perhaps more than the chili, that's the giveaway that you've been to Mike's.

Anne Carpenter, meanwhile, zips between her calculator, credit card machine and milkshake blender, calling out orders as she goes. A woman gives her order and pats her on the forearm, softly saying, "It's so sad."

Over the phone, James Carpenter explains the decision to close Mike's while he scrapes the grill. "It was a combination of things. COVID definitely had an impact. In-n-Out coming in — that had an impact, too. We actually lasted a lot longer than I thought when they came." He doesn't have numbers, but he and his wife noticed fewer customers old and new. The pandemic meant cutting hours and hiring another employee to shuttle food to waiting customers in the lot, all while supply prices shot up.

Even before James and Anne Carpenter took over, the shop took some financial hits. In 2012, when Frank Carpenter still ran it, they say Jason Singleton brought an Americans with Disabilities Act lawsuit that cost $10,000 beyond the compliance measures of adding a disabled parking spot, lowering the counter, closing the bathroom to the public and eliminating dine-in service.

The aging building, which Frank Carpenter still owns, is slated to go up for sale with or without the business. James and Anne Carpenter only decided to let the business go over the weekend and shared the news with a couple people Wednesday. "It spread kinda quick," says James Carpenter, adding that the next day they unexpectedly sold out of fries and nearly all their hot dogs, and had to shut down by 4 p.m. "People get upset when they can't get fries."

Sales were doubled if not tripled and the phone has been ringing all day. "It's too bad those orders didn't come in earlier," he says.

James Carpenter's tone is upbeat but he sounds tired, too. "Twelve-hour days kind of takes its toll on you," His physical therapist said he was "destroying" his elbows and back, so he and Anne swapped around some duties, like prepping fries. But now Anne is feeling the pain of the repetitive motion. Still, James Carpenter says, "We've just been real fortunate with our health."

The last day isn't decided but they plan to be out by the end of March. "I've worked here 35 years, it's a little daunting to have to do something else," says James Carpenter, who says he and Anne are looking at their options. "I could realistically go to McDonald's and be making more than I'm making here," he says with a puff of laughter. And that's without putting in 60-hour weeks. "You make a pretty decent living [owning a restaurant] but the selling point isn't the money you make. You get to own your own business. Like I get to work with my wife and we get along really good ... but all the stress and all the headaches go with it."

Still, this might not be the end of Mike's Drive Up forever. "If no one buys the business, we still have the chili recipe that people really like," says James Carpenter, noting it might sell as prepared chili or seasoning. "It won't go completely away. That would be a shame."