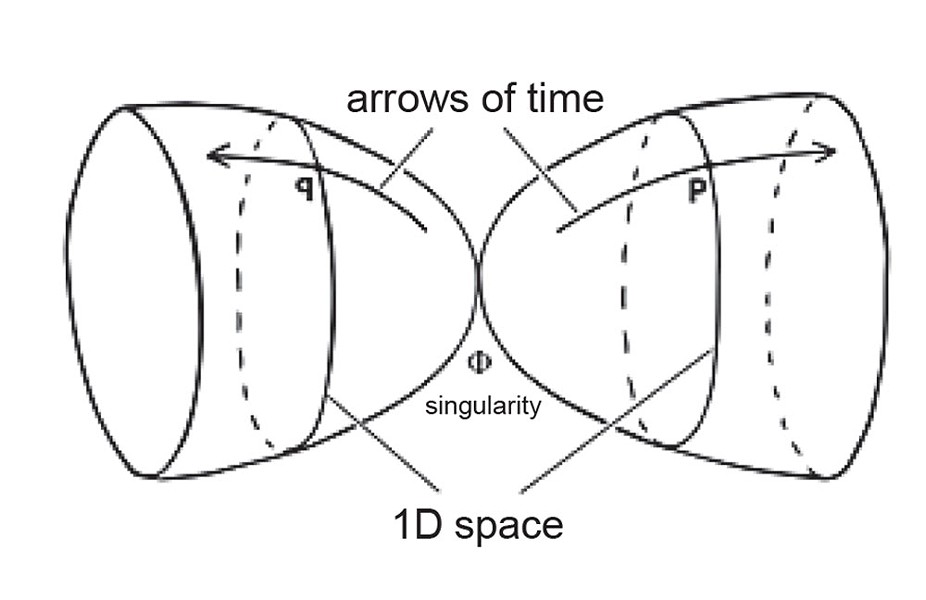 For nearly 100 years, the idea of a "Big Bang" birthing our universe has been the leading cosmological model. In the 1920s, Russian mathematician Alexander Friedmann and later Belgian astronomer Georges Lemaître derived the notion of an expanding universe based on Einstein's 1915 General Theory of Relativity. Extrapolating backwards in time, expansion implies an infinitely small and dense singularity, Lemaître's primeval atom, at a finite time in the past. The term "Big Bang" (neither big nor a bang!) came later — intended pejoratively — from British astronomer Fred Hoyle.

Hence the "arrow of time." According to the Big Bang theory, time began nearly 14 billion years ago and has been moving forward, from the past into the future, ever since. It all seems so natural: We age one day at a time, an omelet never reverts to its constituent eggs, your latte won't unmix itself into milk and coffee. In the big picture, entropy (that is, disorder) increases. You're more disordered than you were yesterday, your omelet and your latte are more disordered than their ingredients. We remember the past, while the future is unknown to us.

So far, so good. Except there's nothing in the laws of physics that gives rise to time's arrow. These laws — reflected in the theories of Newton's and Einstein's gravitation, Maxwell's electrodynamics and quantum mechanics — don't differentiate between the past and the future. Watch a video of two billiard balls colliding. How can you tell if the footage is being projected forward or backward? You can't. Similarly, the laws of physics are "time invariant."

And that's the problem: Time in the "real" world is asymmetric, while the laws of physics are symmetric: there's nothing to tell the individual atoms of this world what's past and what's future. Problems beget answers, and a solution was first mooted by the late Russian physicist Andrei Sakharov in the 1970s: Our universe has a mirror image twin.

This seemingly crazy idea has now been elaborated by many physicists including Julian Barbour in the U.K., Sean Carroll in the U.S. and Jean-Pierre Petit in France. Maybe, they say, we're only seeing half the picture. If our universe has a mirror image, a universe that's expanding in the opposite direction from ours, that neatly takes care of the asymmetry: Time goes one way in our universe and the other way in the mirror universe; matter here is antimatter there. Everything balances out, thus restoring symmetry. Our experience of the arrow of time — defined by constantly increasing entropy — matches theirs, even though the two arrows, ours and theirs, are pointing in opposite directions. In this picture, the Big Bang is no longer the beginning of a one-way, 14-billion-year odyssey but instead is what's called a Janus point (Janus being the Roman god who looks both ways, into the past and into the future) from which twin mirror-image universes emerge. These two epochs forever flow away from each other; we can never be aware of them, nor them of us. Which is probably for the best, matter plus antimatter being a particularly lethal combination.

That's not the half of it. The mirror-universe theory predicts that the speed of light is no longer constant but increases the closer you go back in time to where it's infinite at the Big Bang/Janus point, and then (mirror image!) slows down on the other side. And out of that comes a proposal for interstellar faster-than-light travel, so we can get to the stars within a human lifetime.

You can't make this stuff up.

Barry Evans (barryevans9@yahoo.com) says "Hi!" to his twin in our mirror-image universe. He prefers he/him.