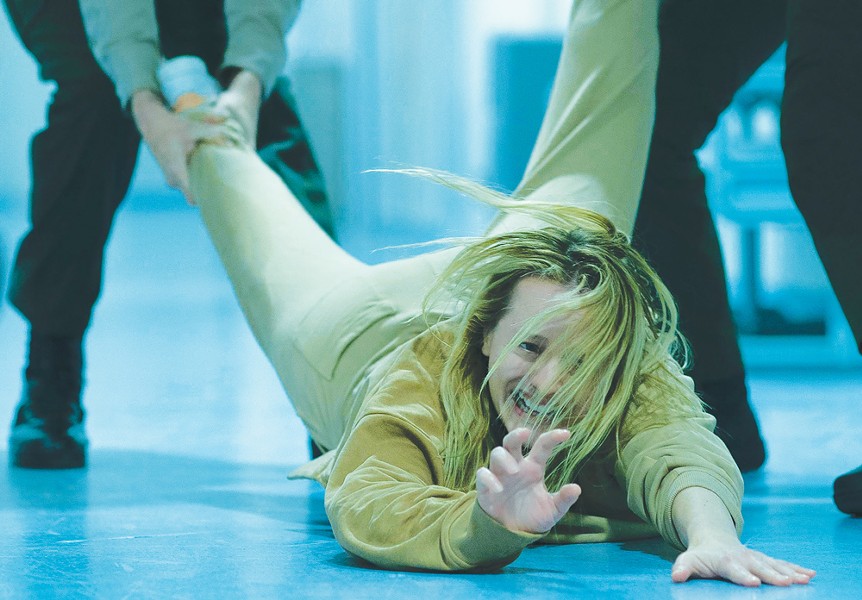 The Invisible Man Me at the end of Girl Scout cookie season.

THE INVISIBLE MAN. When news filtered down that Universal Pictures had big plans to reach back into its rich history and recast itself as the home of the monsters, complete with an MCU-paralleling Dark Universe franchise, I got a little excited. I grew up checking out the Crestwood House monster books from the elementary school library. I waited months for a copy of Creature from the Black Lagoon after submitting an inter-library loan request — watching and re-watching a VHS copy of, well, Creature from the Black Lagoon (1954), fascinated by the imagery of Frankenstein and Dracula and the Wolfman, half-obscured in the shadows of the then-so-distant past. The prospect of a series of fun, spectacular, old-school studio horror movies brought back simpler, happier times. Hope, maybe.

Of course, Universal, bloated and outmoded as it is, would find a way to siphon the fun from something as seemingly obvious as monster movies. The opening salvo was The Mummy (2017), which squandered the talents of a formidable cast (Sofia Boutella, Tom Cruise, Russell Crowe, Courtney B. Vance) with a nonsensical script — this despite the efforts of hotshots David Koepp and Christopher McQuarrie — poorly designed and worse executed effects and a general air of dismal joylessness. That movie, because the universe is occasionally a self-righting system, was a spectacular failure and sent the questionable minds responsible scrambling back to the lizard-lair to re-assess. They apparently couldn't abandon the enterprise altogether. And probably because I'm a glutton for punishment, I find this somewhat heartening.

Universal has apparently ceded at least partial control of the monsters to Blumhouse, the horror imprint of Jason Blum. Blum's methods aren't new: smart scripts, reasonable budgets, creative control left in the hands of the creatives. The company specializes in genre and produces a great number of small, very profitable movies. It's the kind of methodology that gave rise to the American cinema booms of both the 1970s and 1990s, but was somehow forgotten. Universal handed Blumhouse the keys to the Dark Universe, at least for now, with a seeming directive of "See what you can do with this."

And so they did: Leigh Whannell was brought on board, a pre-existing script was summarily thrown into the garbage (where I suspect it belongs), and The Invisible Man was started fresh. Whannell first came to prominence 15 years ago or so, when Saw caught fire in the cultural consciousness. Whannell took me by surprise with Insidious (2010), though, which found him once again collaborating with director James Wan (also a Blumhouse production). The cleverness and economy of the storytelling, the uncynical approach to genre, even the jump scares really worked for me; the movie felt like something made by passionate people, not just commoditized pap. Whannell has worked continuously, mostly under the Blumhouse banner, including writer-director credits for Insidious: Chapter 3 (2015), which I missed, and Upgrade (2018) a deceptively well-executed dystopian-tech action-tragedy.

Whannell's version of The Invisible Man naturally owes its existence to the H.G. Wells novel from 1897, but bears little resemblance to its cinematic precursors, of which there are many — some of which are Wells adaptations and the rest of which are derivative or just rip-offs.

Whannell selects the victim as protagonist, in this case Cecilia Kass (Elisabeth Moss), whom we meet as she executes a pre-dawn escape from the chillingly elegant cliffside mansion of her pathologically abusive partner Adrian Griffin (Oliver Jackson-Cohen). Enlisting the aid of her sister Emily (Harriet Dyer), who in turn finds Cecilia a temporary home with her police officer friend James (Aldis Hodge) and his daughter Sydney (Storm Reid). Even with her escape seemingly complete, though, Cecilia can't help but feel that Adrian could be anywhere. With the news of his death by suicide and of a significant financial windfall provided by his will, she starts to breathe. Which, of course, is when the real trouble starts.

It's easy to make The Invisible Man out as a work of allegory, touching as it does on such grotesquely timely motifs as gaslighting, victim blaming and the oppressiveness of technology, and I don't suppose one would be wrong to do so. It is equally important to appreciate it for its intelligence and originality. It is assuredly a monster movie and very much in keeping with the spirit of its influences, but it does something new, inventive and deeply entertaining with that spirit. It represents a most surefooted step in the right direction for a potential franchise and we can only hope subsequent efforts will continue along its trajectory. R. 124M. BROADWAY, FORTUNA, MILL CREEK.

EXTRA ORDINARY. Irish comedy-horror about a reluctant medium trying to save a possessed girl from a has-been rock star/bumbling Satanist. R. 134M. MINIPLEX.

THE JESUS ROLLS. John Turturo directs and stars in a comedy spinoff about his side character from The Big Lebowski. R. 85M. MINOR.

ONCE WERE BROTHERS: ROBBIE ROBERTSON AND THE BAND. Documentary on the iconic band and its frontman. R. 100M. MINOR.

FANTASY ISLAND. Well, someone finally remade this vintage TV show for the freaky horror it was. With Michael Peña as Mr. Rourke, and Lucy Hale and Maggie Q as guests getting the "Monkey's Paw" treatment. PG13. 110M. BROADWAY, MILL CREEK.