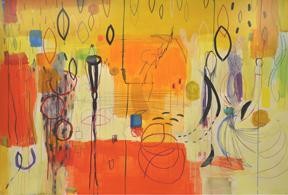 "Mimi is important in that she was the first painter in our region to practice a form of abstraction that is entirely improvisational and free of traditional object/ground references. The spaces that she describes in her work have no relationship to traditional landscape or human figure reference. When Mimi first moved to the North Coast in the early 1980s, she came as modernist missionary, shaking up the local, rather parochial art scene, which at the time was very circumspect in its ideas about art."

The First Street exhibit traces LaPlant's evolution, including pieces from the early 1970s up through 2010 work -- 37 years of art, total.

Students in HSU's Museum and Gallery Practices program organized the paintings, frottage and notebooks to maximum effectiveness, grouping them stylistically so viewers can absorb all the different phases of LaPlant's career. Self-portraits line one wall. "I use myself as a still-life," LaPlant said. "When I don't know what to draw, I think, ‘Oh, I'll draw myself!'" The subject matter does not prove repetitious, however -- the face may be the same, but the moods and materials shift, evidence of how much interpretation and tools can color a painting.

Nearby, a series of mixed media pieces seem incongruous at first, until LaPlant points out the incorporated photos of herself as a child. The work stemmed from a time she was "a little at odds" with herself and striving to better grasp her past. Art is a way of working things out, LaPlant said. "You always want to understand -- it's part of the process."

Along those same lines, a series of frottage (from the French word for "rubbing" and based on a surrealist technique developed by artist Max Ernst) captures imprints from around her father's house. He was very ill at the time, LaPlant said, and so she began documenting patterns of his furniture, preserving, through art, a bit of history containing not only her father and his belongings, but those of his mother -- family heritage saved onto pieces of paper.

A collection of LaPlant's notebooks also serves to document her life, in this case, her particular life as an artist starting from the 1980s. Like many artists, she carries a notebook when out and about, in case inspiration should strike. This began when she realized how many sketchbooks she had lying around with a few drawings here, a couple others there. "I made a commitment to finish a sketchbook," LaPlant said. "I just started doing a drawing every day. It felt so great... played out really well." The notebooks enable a connection that the artist absorbs into her daily life, she continued. "It's really personal -- [the subject matter] might be anything." The small scale of the notebooks also provide a sense of freedom, permission to paint or draw without the potential consequences of canvas.

What the notebooks suggest, of course, does manifest on canvas -- and how. LaPlant's larger pieces run several feet in each direction, burst with color -- her "anti-depressant" paintings -- abstract but never overwhelming despite the size and power. How does she keep from overdoing the intensity? "I used to start out really well," she said, "trying to keep the painting from turning into a mess -- it was when rescuing them that the magic would happen."

The exhibition runs through May 16. First Street Gallery is open Tuesday through Sunday, noon to 5 p.m., and is located at 422 First St., Eureka. Visit humboldt.edu/~first for more information.

Wondering what's up behind the papered windows in the old Humboldt Surf Co. space? True, things don't look much different from the outside - Matt Beard's beloved mural preempts much imagining a new business in that space -- but a transition is, in fact, underway. Trinidad-based Ironside Metal Works is both opening the Ironside Gallery and allowing the Humboldt Arts Project (humboldtartsproject.com) to utilize the space for this Friday's Arts! Arcata. Humboldt Arts Project has been throwing art parties in the Feuerwerker Building for months now -- expect more of the same eclectic mix of local art and dance troupes, all of which represents buildup to the first-ever Humboldt Arts Festival.

The festival encompasses two days, May 15 and 16, and four blocks, running from Ninth to 11th and from I to K streets. Humboldt Arts Project founder and festival organizer Vico Hernandez has been "working feverishly" with Arcata Main Street to bring the group's plans to fruition. Coinciding with HSU's graduation weekend, the festival will showcase what else Humboldt has to offer, including music, crafts and local cuisine: Humboldt Brewery, Robert Goodman Wines and the Jambalaya are all in as sponsors so far. Highlights include receptions at all locations, a "massive" outdoor sculpture garden and a central stage with samba dancers, fire-spinners, contemporary ballet and tribal dance.

To participate in or donate to the Humboldt Arts Festival, visit humboldtartsfestival.com. "We need volunteers!" Vico said. Like the Humboldt Arts Project shows, artwork acceptance is a matter of course. Those events have featured up to 60 artists, and Vico estimates about 300 artists have been involved so far in one way or another.

"Artists coming together benefits everybody," Vico said. He hopes to redefine Arcata as an artists' community. "Big ideas start with small conversations -- this could get even bigger." Although he says he never envisioned himself at the helm of transforming Arcata's art scene, Vico admits he's loving doing it. "It's been worth the journey," he said. "Putting it all together has been really fulfilling. If we keep doing what we can, the arts community will continue to grow and flourish."

Arts! Arcata runs from 6 to 9 p.m., Friday, April 9. For a complete guide to exhibits, refer to listings elsewhere in the Journal or go to artsarcata.com.