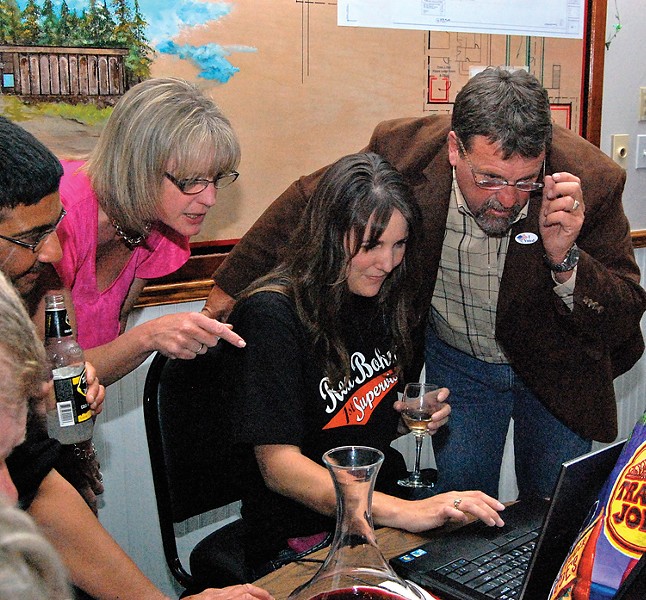 Photo by Heidi Walters Early in the evening at Clendenen party. Later, When the second report came in the Clendenen camp reacted with joy ... until they realized it was merely the first report broken down.

photo by bob doran The presumed winner chats on the phone with Clif Clendenen.

photo by Zach St. George Waiting for the first results to come in, Estelle Fennell paced around her Fortuna headquarters, throwing air punches at the reporter.

Photo by Andrew Goff Bohn and wife Adena soak in their victory.

The writing on the wall came early -- in giant scrawls -- on election night, and the two conservative allies who raised buckets of money to win supervisorial seats celebrated as two different parties erupted around them.

At the Elk's Club in Eureka, Rex Bohn huddled at a back corner table with County Supervisor Virginia Bass and her husband, political swami Matthew Owen when first PDF results flashed across a laptop.

The numbers showed Bohn with a staggeringly strong 65 percent support among mail-in voters in the county's 1st District. A November run-off against either of his two opponents to replace retiring Supervisor Jimmy Smith appeared unlikely.

Bohn walked to the stage, took up a microphone and looked down at about 250 supporters, many in orange and black Bohn-emblazoned T-shirts and sweatshirts. "The auction's gonna start in 10 minutes," he joked -- then clued in the rest of the room as the early numbers were projected onto a giant screen.

That was an understatement, and the crowd knew it. Congratulations and handshakes came from all sides.

Farther south in Fortuna, where moments before Estelle Fennell had been pacing at her campaign headquarters, she grinned and laughed out loud as the first results were read over Access Humboldt.

Suddenly, what had been a tense group of people huddled in a room became a party, 25 or 30 Fennell fans getting louder and happier by the moment. Fennell let it run for a little while, and then stepped in front of the television screen.

"These are just the first results guys," she said.

But they seemed like telling results. More and more people have been voting by mail in Humboldt, and savvy political teams knew how to read the signs. Fennell had captured 51.4 percent of those first votes to incumbent Clif Clendenen's 48.2.

Once the joy settled down into happier expectation, during the long wait for the next wave of results, Fennell told the Journal, "At least now I feel a chance to be hopeful."

At the Hot Brew Bistro, next to Wildwood Saw & Sporting Goods on the south end of Fortuna, Clendenen drank a Great White and tried to parse the numbers. He was surprised, he said. "But then my first question was, ‘What's in that number?' If it had a lot of Fortuna absentees that would be bad, but if more SoHum then that would be a good result." He had always expected Fennell to do well in southern Humboldt.

The night started with fruit kabobs, dips and chips in an old-fashioned restaurant, then eventually moved to a side room, where light jazz played. The crowd dwindled, talked and waited.

The next batch of numbers were only a little more promising.

Clendenen paced. He walked outside where the jazz piped from the restaurant radio played to an empty dark sidewalk. He walked back inside, to the sound of a vacuum cleaner. The restaurant crew had cleaned up the main room, returning the jams and salt and pepper shakers and setting the tables for a 7 a.m. Rotary breakfast. At 11:40 p.m., everyone was standing up and starting to leave, saying things like "Cross your fingers and cross your toes" and "We'll keep checking at home."

Someone said the scene at Estelle's party was subdued as well.

Across town, Fennell supporters had gotten tense again, waiting for results to dribble out of the elections office, and they joked about recalling Carolyn Crnich, the county clerk/recorder. They watched a sports recap on Channel 3. They watched an interview with Morgan Freeman.

Then around 12:15 a.m. on Wednesday, just as supporter Bill Barnum called Fennell, they looked again at that long-steady computer screen and saw something new. Now it was 53.4 percent for Fennell, and 46.2 percent for Clendenen, with 83 percent of precincts reporting.

Fennell screamed. One of her supporters dipped her as if they were dancing. She yelled "I love you" into the phone. She jumped up and down, stomped the ground, and punched the air with her fist. "I can't believe it!" she cried.

Meanwhile in the 1st District race, Cheryl Seidner, Bohn's closest competitor but always running to catch up, tried to project gratitude as she watched her campaign wind down.

Earlier Tuesday night, at the home of Nancy and Peter LaVallee, the door cracked open and Seidner's freckled grin peeked out. "Password!" She chuckled. Inside a dozen or so friends and a few relatives took tickets for a door prize and accepted thank you gifts of local huckleberry jam. Seidner, in a red shirt and beaded necklaces, took a strand of beads from her neck and draped them over the head of campaign coordinator Josh Drayton. Friends brought potluck dishes, sushi, dolmas, oysters, three kinds of hummus, bottles of wine.
At one point Seidner choked up for a moment, a hand over her mouth, and recovered with an even wider smile. "It's been fun!"

In the study, where Nancy LaVallee saw Bohn's first blast of votes come in, she and Drayton reassured Seidner that this was expected. But the second results were no better. A half dozen people crowded into the darkened study, and Seidner's smile stayed steady in the light of the monitor, though Bohn's lead was huge. "I've got 1,400," she said. "I think that's cool. ... That's not shabby at all." "We didn't roll over and die," someone said.

But even if Seidner was going down fighting -- it was still down.

At the Elks Club, confident their guy had it, the room thinned during the seemingly endless hours between the first and second reports. "I've got old supporters," Bohn said. "They're emailing me saying, 'Hey, we're watching the election results in bed."

Around 10:30 p.m., the second wave of good news hit. The early numbers held. Rex was in. Somebody pumped Toby Keith's "Courtesy of the Red, White and Blue" through less-than-adequate speakers.

"I guess we won," Bohn said sedately to thunderous applause.

After a few more thank yous and applause breaks, the candidate looked toward his most immediate responsibilities.

At the LaVallee home, only Nancy LaVallee and Siedner's family were left when the Journal asked Seidner what she thought of Bohn calling the race. "Well, good for him," she said. "He can call whatever he wants to call. That's his business." Then she flashed that smile again.

The longshot candidate for the 1st district seat, Annette De Modena, gathered with a couple of dozen supporters in her Eureka office.

Once she saw her early returns -- just 7 percent of the vote -- she told a friend, "I'm pretty peaceful about the whole thing."

She blamed a shortage of funds, and added, "You do what you can do, and then you have to let go of it."

Drama was lower all night in the 3rd District race, where incumbent Mark Lovelace had been widely expected to beat his challenger, Karen Brooks.

Brooks opted to spend a quiet election night at her Jacoby Creek home with her family, and "giving some love to the volunteers who worked so hard" on her campaign. The press was not invited.

About 50 Lovelace friends gathered at the Jambalaya in Arcata, where Trifecta rocked, people daubed bits of feta cheese and onions on pita bread, and Lovelace watched his winning numbers come in on a big screen above the bar.

He was relieved to be staying well ahead, he said early in the evening, but also pondering a very different board of supervisors.