Labors of love from modern masters 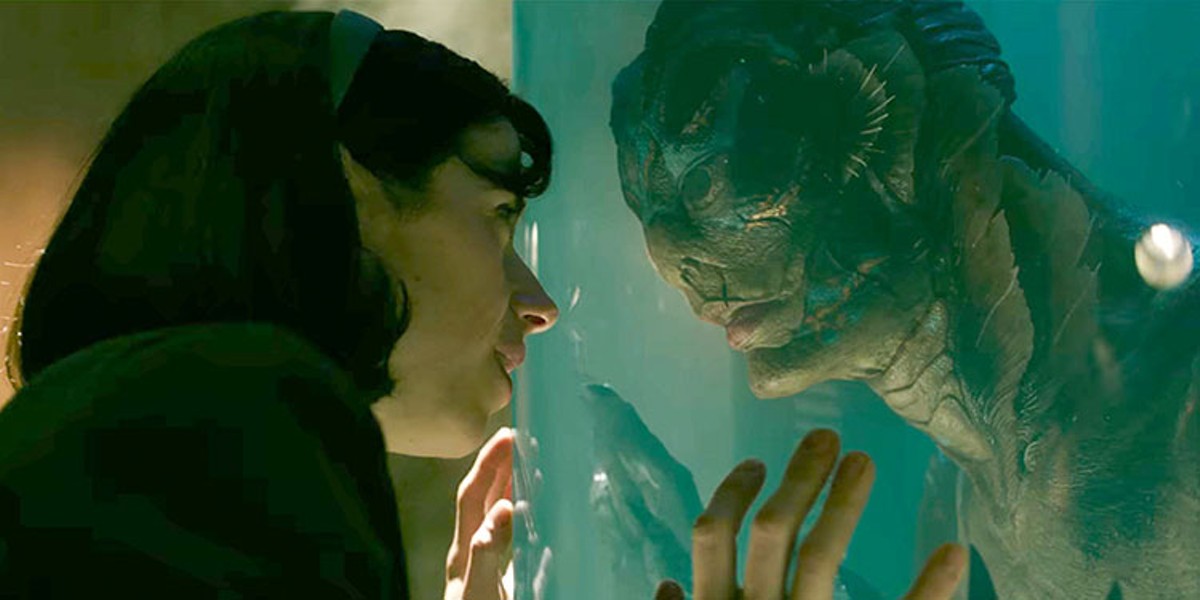 The Shape of Water

The Shape of Water When you finally accept that human men are trash and start dating amphibians.

THE SHAPE OF WATER. Guillermo del Toro loves a monster movie. He's been working on variations within the genre for 25 years or so and he seems to be one of its last, great practitioners. As modern and self-aware as he may be, his work still belies a reverence for the classics of early mid-20th century creature craft. Never has this reverence, or his outsized humanism and heart, been more prominently on display than in his latest.

I recently mentioned The Shape of Water as one of my favorite movies of 2017, which it of course remains. Because we live here, though, in this oft-forgotten outpost to which cultural documents must apparently be brought by mule-team, on the harrowing journey over the secreting mountains and through the misty ancient forests so that we dwellers in the shadowed past might also participate in the conversations of the day, it has now become one of my favorites of 2018, a year that might need its message of love and connection even more than the last; better late than never, I guess.

In 1962 Baltimore, Elisa Esposito (Sally Hawkins) lives a quiet, unadorned life. She lives alone, socializing primarily with her closeted, struggling painter neighbor Giles (Richard Jenkins), with whom she frequents a middling pie shop where he has a crush on the waiter. She works as a custodian in a secure government facility with Zelda (Octavia Spencer), who looks out for Elisa like a big sister. Ultimately though, our protagonist is defined by a desire for connection and a sense of herself as other, an identity made all the more pointed by the fact that she cannot speak.

One night, Elisa and Zelda are reassigned to the care and cleaning of certain laboratory operated by Dr. Robert Hoffstetler (Michael Stuhlbarg) and overseen by Col. Richard Strickland (Michael Shannon). Held in the lab, an "asset" captured in the Amazon — a crypto-zoological marvel, it's an aquatic humanoid of unknown origin and potential. Hoffstetler, fascinated by its beauty and intelligence, understands that there is much to be learned from the creature. The good doctor has secrets, though, and, in serving multiple masters, is left all but powerless. Strickland, by contrast, the walking, goggling definition of repression and paranoia, channels his fascination with the "asset" into hatred; he wants to vivisect and weaponize it, to destroy and remake the other, just as he would the parts of himself he keeps from the world. Elisa sees the self inside the "asset" and falls in love. This throws her into conflict with Strickland and the interests of the government he serves. So, enlisting the aid of Giles and Zelda, she plots a jailbreak.

There are a great many successes — technical, thematic, referential and performative alike — that make The Shape of Water what it is. But the real story is in the coming together of those elements into something even greater than the sum of its formidable parts. As one has come to expect from del Toro, the movie is exquisitely designed and executed, from the construction of its immersive, detailed sets to its elegant camera movement and editing and its customarily intricate sound design. The cast, to a one, rises to the occasion, giving a number of career-best performances. This is all in service of a story that, on one level, works beautifully as a tribute to the monster movies of yesteryear (it conjured a deep nostalgia for my childhood copy of the 1954 classic The Creature from the Black Lagoon). It also succeeds as a lyrical love story, a timeless fable and, if one is so inclined, a pointed commentary on the politics of days both gone by and yet to come. R. 123m. BROADWAY, MINOR.

THE PHANTOM THREAD. As we age, Paul Thomas Anderson and I, his work becomes ever richer, more nuanced, harder to parse and further from the point of origin of our imaginary relationship. I fell hard for Anderson's long takes, whip-pans and daredevil dolly moves with Hard Eight (1996) and Boogie Nights (1997), becoming a lifetime acolyte. Time passes and things must change. From a fan's perspective, the shift in Anderson's career came with There Will Be Blood (2007), a brutal, perfect, formalized exercise in the art of old-school American cinema but also in novelistic psychological realism, a character study in the boldest terms. The character in question, Daniel Plainview, would of course be nothing were he not inhabited by Daniel Day-Lewis, a performance that won him an Academy Award and set the stage for this, supposedly his final movie role.

Anderson's movie work since There Will Be Blood — The Master (2012), Inherent Vice (2015) and now Phantom Thread — eschews the ecstatic, frenetic movement of his early work in service of immersion in character and period. With this latest work as the most vivid example, the director focuses intensely on the minutiae of character and mirrors the setting and era of his stories with his cinematic technique.

Phantom Thread focuses on Reynolds Woodcock, couturier to stars and royalty in 1950s London. He operates his atelier as a sort of benevolent dictator, aided by his sister and constant companion Cyril (Lesley Manville). He is enormously talented and successful, but also broken and incomplete in deep, fundamental places. A boy who's become a man but is still looking for his mother, he cycles through muses, casting them aside when their imperfect humanity starts to grate on him. When he meets Alma (Vicky Krieps) while on holiday, though, he finds an object for his affection that will not sit passively by when he tires of her. What follows is an impossibly nuanced domestic drama, a study of the intricacies of an intimate relationship that has within it vast, unbroken distance. It can be a trying exercise but the text, the acting and the technical aspects reward patience. R. 130m. BROADWAY, MINOR.

12 STRONG. Chris Hemsworth stars in a drama about a Special Forces unit sent to Afghanistan in the immediate aftermath of 9/11. With Michael Peña and Michael Shannon. R. 130m. BROADWAY, FORTUNA, MILL CREEK.

THE GREATEST SHOWMAN. A glossy, glitzy musical about a complicated man. Hugh Jackman plays P.T. Barnum, an abolitionist and social reformer who made his money off "freak shows" and minstrelsy. Michelle Williams and Zac Efron also star. Statue of Barnum on the Arcata Plaza unlikely. PG. 105m. BROADWAY, FORTUNA.

THE OTHER SIDE OF HOPE. A Finnish man (Sakari Kuosmanen) who starts a restaurant with his gambling winnings befriends and employs a Syrian refugee (Sherwan Haji) in this comedy/drama from Finland. NR. 100m. MINIPLEX.

THE POST. With a stellar performance by Meryl Streep as Washington Post publisher Katharine Graham and masterful direction by Steven Spielberg, this true newsroom drama about publishing the Pentagon Papers is artful, entertaining and edifying. With a solid, if overshadowed, Tom Hanks. PG13. 115m. BROADWAY, MILL CREEK, MINOR.

THE SACRIFICE (1986). The restored version of Andrei Tartovsky's final film, which focuses on a man and his son on the brink of World War III. PG. 149m. MINIPLEX.

THE SQUARE. This Palme D›Or winner, a Swedish satire about performance art, should satisfy your need to feel smart, when really we know you're there to watch Elisabeth Moss (Mad Men, The Handmaid's Tale) tear it up, per usual. R. 142m. MINIPLEX

STAR WARS: THE LAST JEDI. An ambitious, funny installment of the beloved franchise that should satisfy both mega-fans and fair-weather Wookies. PG13. 153m. BROADWAY, MILL CREEK.