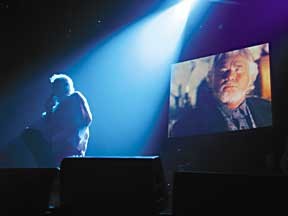 Well, shall we start with the moon? It hovered, just past full, at the far end of the long corridors between rows of Old Town buildings, lighting up alleys and casting blue tones onto the already lamp-lit streets. You'd walk alongside one old brick edifice - perhaps darting inside to check out an art exhibit, catch a strain of live music, or to buy some chocolate - then cross into a street and there'd be that big moon again. Just past full. Not at its peak anymore, but still shining full-bore. The same old moon that shone on the land before it was Eureka, or that fell in glittery broken-up sheets onto the Klamath River and the ocean when nobody but, say, the ancestors of Yurok artist Stuart Foster were around to notice it. The same moon that shone on Eureka that night in 1920 - town at its peak, or maybe just past full but not knowing it, all a-bustle with fish and log commerce and the brand-spanking-new Sweasey building opening for the lovestruck silent movie crowds.

So, that moon - the one that, this past Saturday night during Arts Alive!, shone indifferently on the alleys, the streets, the Sweasey - once again opening its doors to the eager masses -- and the artists in their galleries - including Foster, holding court amid his paintings and pencil drawings of redwoods inside the Northern California Indian Development Council's art and gift shop on F Street. For the moon makes no judgment: Is Foster's depiction of sequoias sublime? The moon doesn't care, but we say indeed yes, especially in light of the teensy deer he usually has tiptoeing beneath the stands of behemoths - and Foster himself seemed happily weary Saturday night, his eyes worn out, for all day he'd been entertaining camera-flashing hordes who'd read about him in one of the daily papers. Is the remodeled Sweasey, now called the Arkley Center for the Performing Arts after the people who poured multiple millions into its revival, as lovely as it was in its youth? Whatever, says the moon. And though we weren't here back then, yes, it seems sufficiently lovely now.

So, walking around amid greater-than-usual art-night crowds, that's how it was: The moon would follow you, until you'd make a decision and dart in. Into the Sweasey, first off, to see for yourself. Shoulder your way past the well-dressed (but not ostentatious) crowds listening to the jazz band swinging inside the tent outside the doors, make your way into yet more crowds wandering with ogling eyes about the theater and up and down stairs and into alcoves. Inhale the fresh-paint scent coming off the woodwork, sit in a cushy seat next to a random, wide-eyed middle-aged couple from out of town - they'd seen the crowd and been pulled in for whatever might happen - and listen to the sound. People laughing and talking and shouting to each other in stage whispers as loud as distant thunder, probably swapping expressions with each other identical to ones their grandparents and great-grandparents had flashed under that same roof in the past. But underneath the timeless buzz, an expectant hush was seeping in, closing mouths, turning people around in their seats to face the stage. Then, just like that, every seat was full, neighbors had caught up on the gossip, and everybody had shut their mouths. The spotlights came on, the curtains went up, and the Limited Edition - those elite songsters from Eureka High - bursts into song: old feel-good stuff from your parent's generation about coffee, tea and love.

Afterward, walking out with the exiting swarm pushing against the entering swarm, trailing three male too-cools who wondered if the singing kids had really wanted to sing those happy corny tunes (did anyone see whips?), you looked down the street while crossing to the next venue and, damn, there was that moon again. And then you darted into an alley, where its glow-power was blocked by close brick and concrete. There, the rattling crash of the rock 'n' roll kids had drawn the usual art-night swarm, a moving beast of youngsters craning for a view of the guitarist, the singer, the drummer. And that's when you knew it wasn't 1920 or 1840. This was pure - um, 1980-come-2007? Punk-come-lately? A woman, passing by on the cheery sidewalk and glancing into the alley with an indulgent smile, said to her companions, "That's the kind of music my kids listen to!" and walked on.

To the moon, if it thought about such things, all these people were the same sort people - plus or minus some thousands - that had always traipsed around beneath its wax-and-wane.