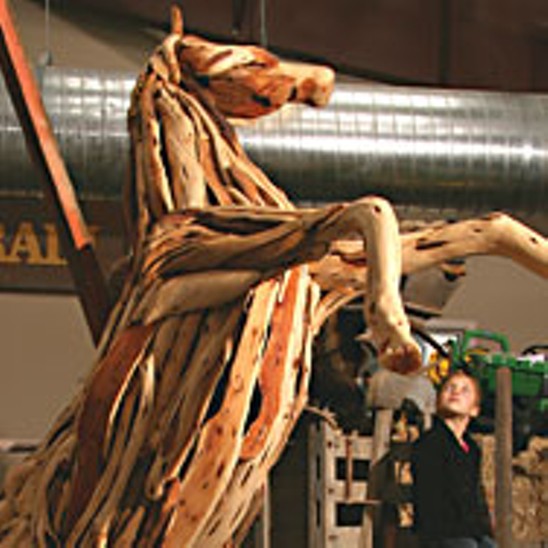 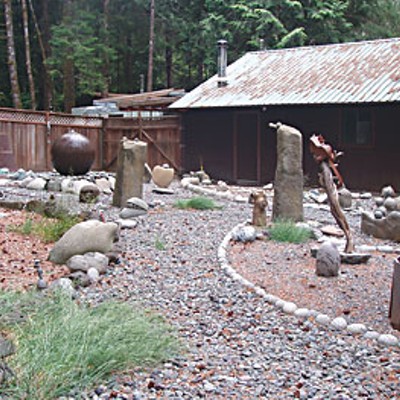 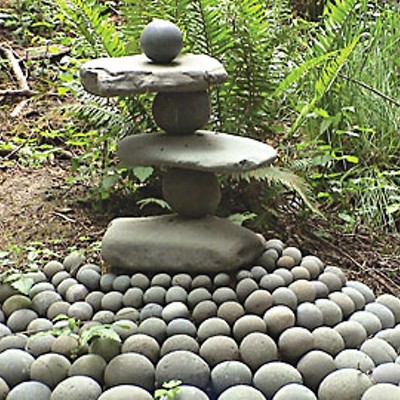 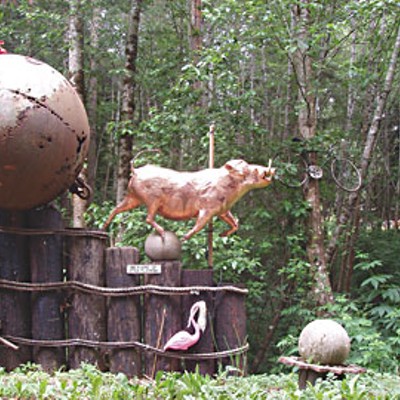 You know you’re getting close to Philip Burgess’s place when you start to see bicycles hanging from the trees. Old rusty ones. A road sign informs you that you are approaching the “brain check area.” You slow down to take in all of these unusual road signs and see more and more sculpture, rocks that look a little unusual, a warning about attack flamingos.

I am always keenly aware that these columns convey just a sliver of what I get to see and hear. Usually, an artist’s home or studio (often they are one and the same) reveals so much more than any gallery show they have up. I wish I could bring the total experience to you, but there is no way. You just have to go there yourself, and Philip was quite happy to invite you all; nevertheless, I thought it best not to give out his address in this publication. I will say that if you ever have an opportunity to tour his corner of the world, don’t hesitate. And be sure to check out the tree house.

Philip’s work is best seen outdoors. There’s a nice example of his rock work and one of his orb fountains at Almquist Lumber in Arcata, and his Juniper Horses were featured at this year’s Redwood Acres Fair, but that’s over now. You can see his work inside, at U.S. Bank in Arcata, where it’s part of a father/son show (he’s the father). That show is up through July 9.

The creation of any piece of art is a dance between the idea that comes from the artist and the things in that artist’s environment. Some artists start with an idea and look for ways to create that vision with the tools at hand. Others are struck by something around them — in Philip’s case, a rock or a piece of driftwood, and use it to complete an idea. In either case, there is a lot of back and forth between inner landscape of the mind and outer landscape, but Philip’s sculptures lean heavily toward the outer. He says that his sculpture incorporates “nature’s beauty and natural design,” and they involve surprisingly little manipulation by his hand.

Philip spends a lot of time on local beaches and rivers, just looking at the world around him and discovering. He is fond of juniper driftwood, for its voluptuous curves. Stripping the bark off with a power washer reveals muscular shapes that bring to mind dancers or horses, anything sinuous and graceful. He’s got (literally) tons and tons of rocks scattered around the place. He’s especially fond of a rock formation known as a concretion (look up that word in Wikipedia to get an idea of what they look like). Concretions are often times perfectly spherical, or sometimes two spherical shapes joined together, looking somewhat like stone snowmen. Dozens of the spherical concretions, gathered and carefully placed, create pieces like “Infinity” or “Round Rock Shrine.” Sometimes the concretions are found peeking out of their host sedimentary rock, resembling human faces.

He does do some manipulation of the elements, splitting rocks or joining them with hidden pins, arranging them, putting a light finish on his driftwood pieces. The results are often pieces that could almost be natural. Looking at some of his work, you might have to stop and ask yourself, “Did those rocks just happen that way, or did somebody do that?” They make you notice things you might not see otherwise: the stripes of color in a rock, the flowing sweep of a piece of driftwood, natural bowls and holes drilled into stone by centuries of water drips on a particular spot.

Philip told me that his work has been compared to that of Andy Goldsworthy, which he takes as a compliment. You may know of Goldsworthy as the artist featured in the movie Rivers and Tides. He uses found objects in nature — rocks, sticks, colored leaves, sand, ice — to create stunning but often ephemeral works.

The genesis of this kind of work is an instinct that all of us have, to show “I was here.” It manifests itself in a range of actions of varying degrees of creative or technical skill: arranging twigs in a decorative pattern, carving one’s initials in a tree, or even throwing one’s shoes over a telephone line (that one kills me — get a life, would ya!). My personal signature is to make a stack of rounded pebbles, which are usually knocked down immediately by my son. I’m sure there are many others, and I welcome you to write in with your own personal favorite (unless it’s throwing your shoes over a telephone line).

The whole point of these doodles in nature are to say, in effect, a sentient being with opposable thumbs was here, and this proves it because no other creature has the ability to do this, or could be bothered. It’s kind of a secret handshake for members of the human club, because nobody else can create or interpret it.

And that’s the great thing about Philip’s work: Anybody can do it. By this, I don’t mean to say that it’s run of the mill stuff – it’s not. It’s remarkable and it’s uniquely Philip Burgess. But anyone can gather interesting rocks, pieces of wood, hunks of plastic washed up on beaches, leaves, twigs, whatever catches your fancy and use it to create art. If you don’t want to bring it home and add it to your already overwhelming pile of stuff at home, you can just make your sculpture at the beach, if you can live with the fact that it will be gone in a couple of days.

I’d direct you to Philip’s website to see his work, but he doesn’t have one. Doesn’t even have an e-mail address. But that might be for the better, because it’s best to see his work in person. He works on commission and can be reached at 822-6730.

Finally, I want to mention the group show, Keeping the Faith,which opens with a reception July 5 at the Piante Gallery in Eureka as part of this month’s Arts Alive! The invitational is a manifestation of Brian Tripp’s gathering of artists, and will feature no less than 14 locally and/or nationally known Native American artists. I’ll be writing about it for my next column. It makes my head spin a little just thinking about talking to them all and speculating where the conversations may lead.