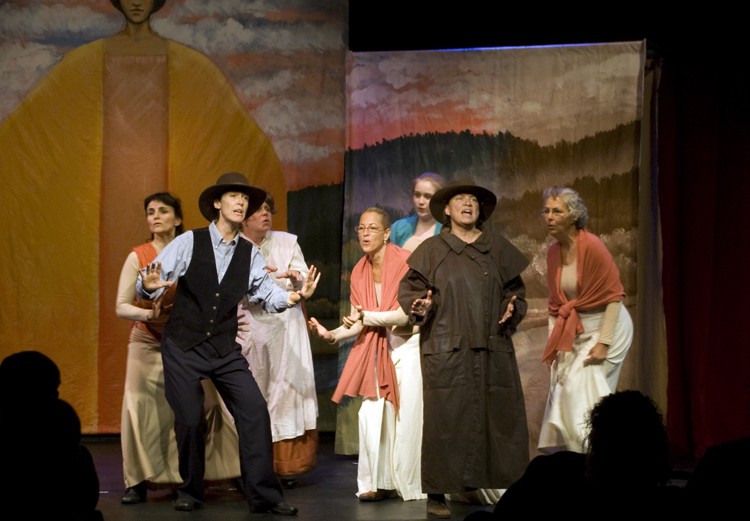 Women of the Northwest, on stage at the Arcata Playhouse, celebrates 14 or so individual women in local history. But in performance, the lively, inventive and relatively brief vignettes about them do something more: They shine a different light on that history itself.

Many of these women are appropriately remembered for individual accomplishments. Elta Cartwright, a track star at Eureka High (which itself made history by becoming the first high school to allow girls to run races in shorts) became the first woman in America to qualify for the 1928 Olympics. As mayor of Eureka from 1926 to 1931, Emily Jones was the first female mayor west of the Mississippi.

After Martella Cone Lane moved to Fortuna with her husband in 1899, she revealed the redwoods to the world in her paintings. Emma Freeman was a prominent photographer who chronicled Eureka and Humboldt scenes from 1907 to 1920. Known as "The Lady of the Hills," Margaret Smith Cobb lived in the wilderness near Garberville in those years, and wrote poems and romantic novels that were championed by Jack London.

Susie Baker Fountain, a columnist for the Arcata Union and the Blue Lake Advocate through the 1950s, collected a century of Humboldt County history. Humboldt State claims her as its first graduate in 1915, and houses her historical records in its library.

Stella Patterson, who came north after the San Francisco earthquake, had a full life but found herself alone in 1946 at age 80. She decided to live in an isolated cabin in the mountains on the Klamath River west of Happy Camp, where the two miners who were her nearest neighbors called her simply "Dear Mad'm." That became the title of her book about the experience, which is still available. "I have lived the life I wanted," she says in this play, "and the life I've loved."

The core cast of 12 actors presented aspects of these women's lives, and storyteller Charlene Storr honored her grandmother, Sadie Gorbet (Tolowa), who at the age of 72 was the only Native American in the California delegation to the 1972 Democratic National Convention. She counseled her family to take the good parts of their tradition and of the modern world, and throw the rest away.

Besides historical figures, the play depicts some mythical ones as well as composite characters and representative figures (a telephone operator, prostitutes, suffragettes.) Historical material was gathered and shaped by Jackie Dandeneau, Edith Butler and Tammy Rae Scott, but the presentation was created by the actors. They came up with an entertaining, very theatrical combination of monologues, dialogues, dramatic and comedic scenes, music and movement, plus bustling and lyrical meditations on themes such as food and motherhood.

The first act was mostly a mosaic of lives, ending with a memorable moment. Members of the Native Women's Collective sang some of the songs associated with the Flower Dance, a coming-of-age ceremony for girls that local tribes basically have in common. Reviving this dance has been a priority for at least 15 years, as I recall. They also spoke of the needs it addresses to restore a sense of self-respect, support and belonging to young women.

The second act had more thematic threads, culminating in a final evocation of childbirth and motherhood, children and the lineage of women. Though the actors typically played several roles each, there were strong individual moments. With that peculiar 1930s diction, Dandeneau conveyed the scary if somewhat comic authority of Mayor Jones. Laura Munoz moved easily from an American Indian woman known only as one of Emma Freeman's favorite photographic subjects to Antoinette Chartin, a cultured French woman who became one of the first non-Native pioneers in Blue Lake of the 1870s, opening a hotel there with her husband.

Ali Freedlund was a spirited Elta Cartwright. The most amazing feature of Siena Nelson's performance as a cowboy who was secretly female (a not uncommon subterfuge) wasn't her perfect gait and vocal cadence: it was the hardness in her eyes. There were vivid performances by Jada Owen and Ciara Cheli-Colando in the final thematic sections. Musicians Julie Froblom, Jill Petricca, Dharla Curry and Jan Bramlett joined the action as needed. Other onstage participants were Tammy Rae Scott and Rebecca Zettler.

These roughly two hours did not offer complete portraits, nor were all ethnic groups and occupations represented. But by including themes from women's lives that influence common events, this production as a whole evokes in dynamic fashion a dimension of experience often neglected in the usual histories. From a rhythm of life revealed by cooks for a lumber camp to the "river of blood" of childbirth, the play suggests a perspective it is vital to include.

Set design is by Siena Nelson, lighting by David Ferney and costumes by Lydia Foreman. Women of the Northwest continues at the Arcata Playhouse Friday and Saturday (Oct. 19-20) at 8 p.m. and Sunday at 2 p.m. before shows in Petrolia Oct. 27 and Briceland Oct. 28.

Coming Up: Redwood Curtain opens the comedy Dusty, and the Big Bad World with a preview on Oct. 25.