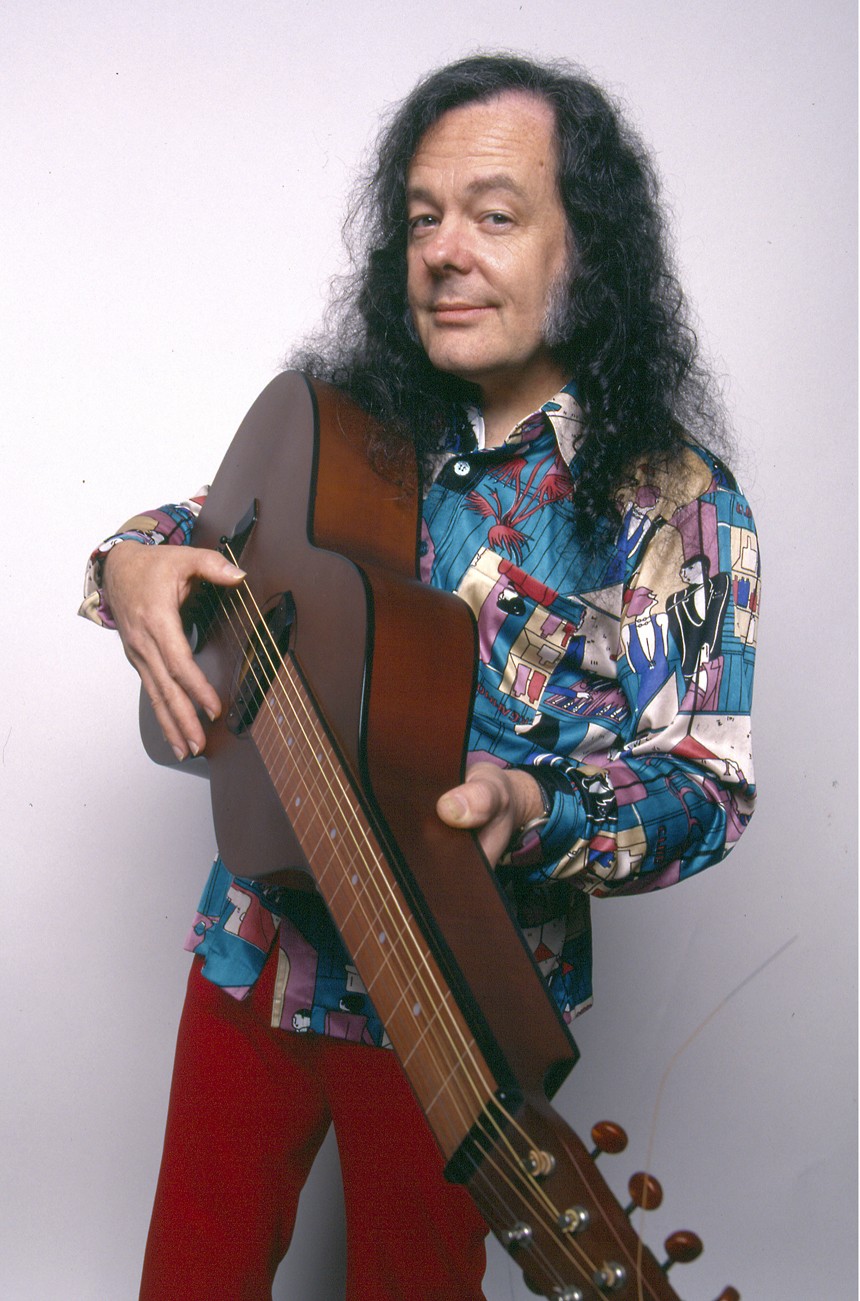 He can tend toward the cranky side and is prone to obtuse humor. His garish outfits have earned him the nickname "The Prince of Polyester." He fits the Fargo description, "kinda funny lookin'." He favors instruments you're probably not familiar with: the caz, the Weissenborn lap guitar, cittern, gumbu, charango and zither. But, most important, David Lindley  can play -- like a mad man.

He is perhaps the ultimate sideman on the SoCal folk-tinged rock scene. He played on too many majorly important records to list here. For starters: Jackson Browne's For Everyman (and most of Browne's albums), Linda Ronstadt's Heart Like a Wheel, Warren Zevon's first album, Ry Cooder's Bop Till You Drop. The list goes on and on up until last year's Jackson Browne disc Love is Strange and The Promise with Bruce Springsteen and the E Street Band. In the '60s, playing in Kaleidoscope, he pioneered the injection of Middle Eastern sounds into rock. With his band El Rayo-X he folded in reggae and won Humboldt's heart playing repeatedly at Reggae on the River.

Lately he's eschewed electric music for the most part, even drummers -- says his ears are too sensitive. (His recent tour with Browne was something of a surprise.) So when he comes to play at Humboldt Brews on Sunday he'll be on his own, aside from a stage full of instruments. That's all he needs. Mr. Dave will shine.

It's a big week for music all around, leading up to that seemingly quintessential Humboldt holiday, 4/20. It's also Green Week, a double entendre since it includes things like a kayak day sponsored by ProSports and, next weekend, a Baykeepers beach cleanup day. GW has 20-plus business sponsors (including the Journal) and includes 16 concerts. Matty Roberts of World Famous says, "It's becoming the community event we had all hoped it would .... Long term, we would like to see this become a SXSW-type event with events happening all over bringing people from out of the area."

So, what does it include? We'll start with Thursday, April 14, when you can choose between a Passion show with the mega-successful jammy neo-bluegrass of Yonder Mountain String Band at the Eureka Theater, and World Famous' electro-dance blast at Arcata Theatre Lounge with Random Rab and The Shpongletron Experience, featuring Brit "psybient" DJ/producer Simon "Shpongle" Posford on turntables and live synth-effects machine plus an amazing all-enveloping multimedia set/show shepherded by VJ Zebbler. Imagine a Burning Man tribe taking over the ATL -- that's what a Shpongle show is all about.

Friday it's the heavy, heavy bass sounds of Heavyweight Dub Champion at Humboldt Brews with Dr. Israel and Totter Todd plus Sasha Rose, and Dakini Star of Goddess Alchemy Project.

On Saturday, Carbon Presents has jam-masters Ray White, Bobby Vega and Prairie Prince at the Red Fox, while Aesop brings hip hop to the Jambalaya with The Understudies, Candlespit Collective and Fresh Coast Connection.

Wednesday is April 20, and you know what that means. Emily lays out the myriad choices for us in our Calendar section; no need to repeat them here. There's more Green stuff next week -- check back next Hum.

A polite note from the student-run campus radio station KRFH suggests, "There's an event at Humboldt State that some people may be interested in." The Saturday night show in the Kate Buchanan Room, called LIXXAPALOOZA ("caps optional"), is "designed to showcase some of the 'indie talent' in the local area."

With eight bands in as many genres, you'll find something you like, be it ska by Killbot Factory, the Cake-esque rock of The Small Axe, indie rock by The Wild Lungs, neo-classic rock by Sour Cream, garage punk by The Don Juannabes, psych folk by Wet Fez, rough-hewn humgrass by The No Good Redwood Ramblers or troublesome "soul/rock/alt-country" by The Trouble (allegedly in that order). Most of them have been on Local Lixx on KRFH at 7 p.m. on Thursdays.

Tributing continues: Thursday at Jambalaya Saint John and the Sinners strips down to a power trio as Creamed, offering a tribute to Cream with Saint as Eric C, bassist Wes Fulton in the Jack Bruce role and drummer Jason Treviño taking Ginger Baker's parts. "This is our only show this year and lovers of blues, heavy guitar riffs and classic rock should not miss it," says Saint. "Songs will be from all of Cream's albums and will feature long improv jamming and the entire side of Wheels of Fire." Um, which side? As I recall, it had four.

On Friday the Jam has The Beatles tribute, Silver Hammer (named for Paul's song about a serial killer), perhaps most famous for recreating the Beatles' Let It Be rooftop gig atop the Open Door Clinic.

It's girl group old home night Friday at the new Alibi in Eureka with the long-awaited reunion of Eureka's first girl group, Automatic Pink, whose members have not strayed far. Plus, The Ian Fays are back in town. Formed seven years ago in Arcata by the identical twin Fay sisters, Sara and Lizz, with help from big sis Lena, The Fays have taken their "twin-casio-pop-Catholic-core" music worldwide. Now based in San Fran, they continue to break hearts and Casios and sing about ex-boyfriends. Their latest, Jensen's Camera, "mostly recorded in Italy," has more of the same.

Westhaven Center's Third Friday Jazz series rolls on without Darius for a change: Instead, it's the super-talented Tim Randles (who plays in countless bands) on the piano, with Tommy Lockett on bass. "We'll be running down some Wayne Shorter material, some more challenging things," says Lockett, adding, "and some Jobim -- you can't go wrong with Jobim."

More jazz Sunday afternoon at the Graves as Shao Way Wu's Inkling Quintet plays his original jazz compositions. That's stand-up bassist Shao Way (who lives across the street from me) with Humboldt native Jill Petricca on flute and sax, Sky Miller on second sax, Brian Post on the baby grand piano, and Mike Myers on drums. An open jam follows their set, no inkling who will show for that. (Note: B. Post is also in charge of the HSU Composers Concert Friday night in Fulkerson Recital Hall. J. Petricca also plays in Gregg Moore's SquarPeg trio, Saturday at Mosgo's. Tina Garsen fills out the trio.)

Meanwhile, that same Sunday afternoon, the Westhaven Center presents the Heavenly Haydn Trio with April Sousa and Renee Taylor on flutes and Mie Matsumoto on cello. They'll play some Haydn (of course) along with music by Telemann and others.

Next Wednesday, while others are celebrating 4/20, The Arcata Playhouse has a show put together by teens from the Playhouse Apprentice program, which Playhouse pop David Ferney explains is a California Arts Council grant program. "We have a half a dozen teens from various high schools who are producing shows for us. One of the kids in the group had heard this band The Toughcats, so they decided to do a show with them."

Based in Maine, The Toughcats describe their sound as "a blend of old timey bluegrass, thoughtful indie rock and classic pop twitches a la early Beatles." David mentions punk and wildness. Likeminded locals The Bucky Walters open. If you're not too busy being green, stop by.