Murals Under the Bridge 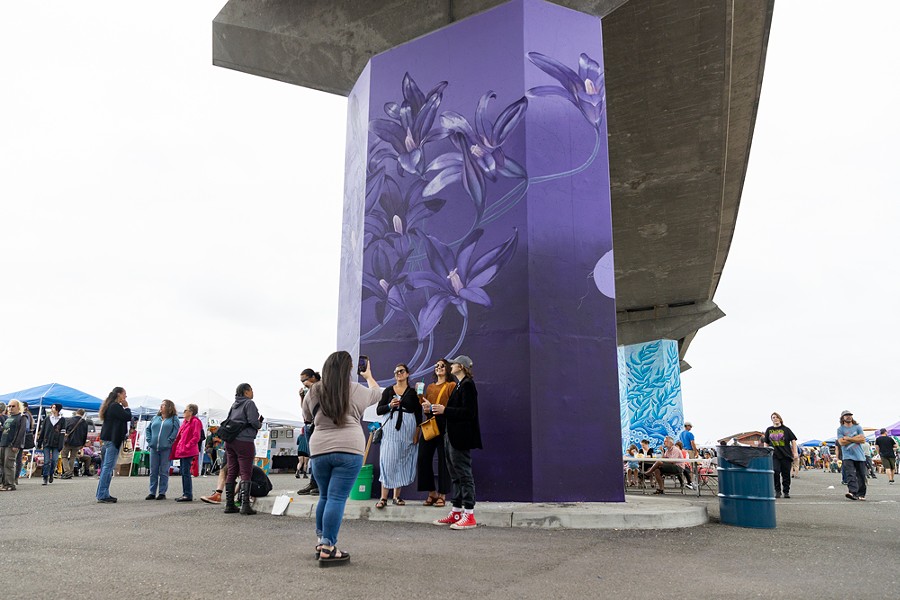 On the evening of Thursday, Aug. 4, a couple dozen people gather in the Pacific Outfitters parking lot for a guided walk, ready to take in the sights of murals underway for this year's Eureka Street Art Festival. Leading the tour is organizer and local artist Jenna Catsos, who has been directly involved coordinating the festival every year it has been held since 2018.

If you're unfamiliar, the Eureka Street Art Festival is a weeklong event dedicated to adding a new beauty to previously blank or bare walls. Artists from Humboldt and afar scale scaffolding to paint murals of their own devising sponsored by local individuals, organizations and businesses.

Previous years have been held in Old Town, Henderson Center, the downtown area, and Fourth and Fifth Streets, each time covering buildings and sidewalks with the work of new and established artists. This year's festival welcomed 11 mural painters and seven mural apprentices to the area out of nearly 500 applicants.

Assisting in the organizing efforts, Catsos credits Humboldt Cider Co. co-owner Michelle Cartledge and City of Eureka Economic Development Manager Swan Asbury. "It really is a labor of love," says Catsos. "There is something magical about working with this small group who are all [so] willing to put in outrageously long hours to make this event happen."

While the three have been the core group of organizers from the beginning, Catsos made sure to note that there are a lot of additional helpers, thanking the community and volunteers for assisting in various capacities each year.

"The planning is essentially year-round. We have our block party, we take a little bit of time off, and then we get right back to it and begin planning for the next year," says Catsos. "Sometimes it can take months and months to get just the walls selected and approved — there's just so many logistical variables that come into play when planning."

One of the locations for this year's festival provided not one, but four separate surfaces for murals to cover. How might one location provide four separate canvases, you ask? By holding up the Samoa Bridge.

The pillars supporting Samoa Bridge were suggested and selected after an unexpected, yet warmly welcomed inquiry from the California Department of Transportation. When the state agency reached out to the City of Eureka in the spring with funds from the Clean California Grant, staff put it in contact with festival organizers and a new partnership was born.

Catsos also wanted to give a special shoutout of appreciation to the Humboldt Area Foundation for supporting the festival's mural apprentice program for the past two years. "The mural apprentice program has allowed us to bring in [and pay] up and coming artists and folks who really want to get their foot in the door with mural painting. There's so much to know with this kind of work that even if you are an incredibly talented painter, you might never be able to pivot into murals," she says. "Part of the intention of this program is to provide a gateway to an experience that can help an artist feel comfortable applying to be a primary artist in the future."

Painting a mural titled "Thrive" along the Waterfront Trail is one of this year's primary muralists, Tess Yinger. Yinger moved to Humboldt five years ago after completing a degree in printmaking and book arts at Portland State University in Oregon. Currently, they teach reading and art, and run the library at Redwood Coast Montessori. Yinger participated in the apprentice program during last year's festival, assisting on the big Pen & Pine map of Eureka on E Street.

"It feels really amazing to be here," Yinger reflects. "After participating in the apprentice program last year, I thought I'd apply to be a primary artist and see if I could paint my own mural. Being able to be a part of an event with so many people coming to appreciate art is really incredible."

With the mural now complete, Yinger will turn their attention to a planned collaborative show with Eureka-based artist Mir de Silva running September through October.

De Silva herself is no stranger to the festival, having participated as a primary artist both last year and the year prior. This year saw her in a slightly different role, leading the charge on the community mural titled "Go Fly a Kite," which features a California Condor and depicts a kite reminiscent of the colorful ones folks may see on occasion flying by the bay in Eureka.

The design for "Go Fly a Kite" was conceptualized by de Silva and brought to life with the help of Evolve Youth Services, an Arcata-based nonprofit dedicated to improving the lives of children and families in foster and adoptive care.

"For this piece I thought it would be fun to get kids involved. I decided on a 'paint by number' design," says de Silva. "As more people fill it in, the design begins to take shape. Initially, I was anticipating kids wanting to participate, but we've had folks of all ages wanting to stop and paint. It's been great."

“One of the great things about our team is that there are no bad ideas. We’re really thinking big with some potential future plans with CalTrans and we’re really excited at the possibilities of the future working partnership.”— Jenna Catsos tweet this

This year's festival saw the return of a block party held on Saturday, Aug. 6, an event that's been on hold for the past two years due to COVID. The block party included more than 70 different local artisans to shop from, food, a beer garden and live music.

The remaining murals erected over the past week can be found on the Humboldt Bay Rowing Association's boathouse and along the U.S. Highway 101 corridor from the Humboldt Inn up to Pacific Outfitters. (Visit www.eurekastreetartfestival.com for a map of what's new.)

When asked about plans for next year's festival, an exhausted but enthusiastic Catsos says no plans have been discussed quite yet. But nothing is off the table. .

"One of the great things about our team is that there are no bad ideas," she says. "We're really thinking big with some potential future plans with CalTrans and we're really excited at the possibilities of the future working partnership."

Alexander Woodard (he/him) is a writer and photographer who lives in Humboldt County.