Museum at the Crossroads 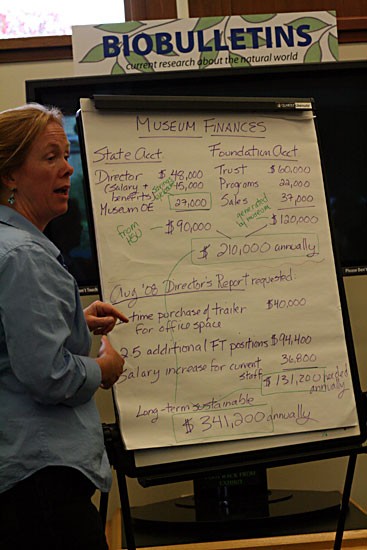 When Humboldt State University announced on Aug. 9 that it would soon shutter its Natural History Museum in Northtown Arcata, supporters of the museum quickly mobilized to save the popular institution for science education. They've been meeting often, and are currently scrambling to raise funds in advance of the university's shut-off date.

Ironically, though, the trigger (or the excuse) for the university's closure of the museum might have come from the institution's own director, who asked HSU for increased funding during one of the most severe budget crises in California history.

In August 2008, museum director Melissa Zielinski filed a report titled, "Sustainability of the HSU Natural History Museum: At the Crossroads" with the College of Natural Resources and Sciences (CNRS), the campus department that overseas the museum. Her description of a museum budget stretched thin was ultimately the basis for the university's decision to permanently cut off all funding for the museum, according to Dean Jim Howard.

In Howard's analysis, Zielinski's "crossroads" report provided justification for closing the NHM. For years the museum has survived with three full-time staff members and a part time administrative assistant. In her proposal, the museum director came up with an estimated cost of funding for two more full time positions, plus $40,000 to buy a portable unit so that staff could have office space outside the museum proper -- an increase of around $130,000 altogether.

Standing beneath a life-size model of a great white shark at a meeting of museum supporters last Wednesday, Howard kneaded his hands nervously as he laid out the dire state of the California State University system's own budget. Overall, CSU is facing a $600 million reduction in funding due to the state's financial crisis; HSU will likely absorb up to $16 million in cuts with $10 million in "base budget reductions," most of that money coming from academic affairs.

This comes as HSU welcomes the largest freshman class in history, creating what Howard described as "a perfect storm of deceasing revenue and increasing demand." As a result they are "jettisoning pieces of the university" including "closure of academic programs and the disappearance of degrees."

The Natural History Museum is not a direct part of any HSU academic program; it mostly serves the wider community, in particular elementary school children. With all that in mind, the museum budget must have seemed an easy, low-hanging limb to lop off as budget pruning began.

"It was obvious the museum wasn't going to get more money; they were going to get less," said Howard. The prudent thing, he said, was to close the museum and mothball the collection until some undetermined future date when an "expanded vision" could be realized. In his rationale, closing the museum was basically Zielinski's idea.

"I don't really see myself as the person who wanted the demise of the museum," said Zielinski in a call to her home on Friday (she is on sick leave and has not been at the museum). "I loved the place. I've worked there for 18 years and I've put a lot of my life into it, always hoping that the funding was going to come around."

She saw her sustainability report as simply an "analysis of the situation," and a plea for help, not as a do-or-die demand. "As I told the [museum] board, we were waiting for a response," she said. "But there was no discussion." A partial response came in February, when she heard from CNRS that additional funding from HSU was highly unlikely.

The crowd at last Wednesday's meeting was looking for a silver lining around the dark cloud, and they got one. Howard conceded that the University might consider postponing the sudden closure while the museum board explores its limited options.

A quick brainstorming session followed with ideas ranging from looking for more grants to suggestions of possible sources for donations. One supporter suggested asking Rob Arkley for money, another said the museum might be promoted as "the home of SpongeBob SquarePants," since the cartoon character's creator is an HSU alum. "If Stephen Hillenburg were to adopt the museum, that would be a great thing," said Howard.

In a follow-up letter, Dean Howard said CNRS would consider keeping the museum open at least until June 2010, but a plan must be drafted immediately "to cover existing State funds that we use to support the NHM." The additional time, he said, "would allow identification and implementation of longer term funds to sustain the NHM at a rate approximately commensurate with the recommendation by the Director."

The daunting bottom line: By Aug. 28 museum supporters must come up with a credible plan to raise $120,000 to keep the museum open short term, and a plan for long-term funding that will supply it with $300,000-$400,000 per year on an ongoing basis, a figure based on Zielinski's proposed expanded budget.

At a follow-up meeting Monday night, supporters came up with more concrete plans. Many said they would make individual pledges -- together totaling about $27,000 -- but there was concern about giving money to HSU Foundation rather than directly to the museum. The general feeling was that the museum somehow needs to become independent of the university, but it was not clear how that might happen.

The group figures an already-planned Dinosaur Ball fundraiser in October might raise $10,000. A "grassroots effort" proposed by a new fundraising committee laid out other possibilities, including a "Night at the Museum" party with a DJ, food and alcohol. They'll look into grants and foundation support, and ask the local Indian tribes for money -- and yes, they plan on approaching Stephen Hillenburg, creator of SpongeBob SquarePants.