Well, then, you might need a permit. And some savvy. 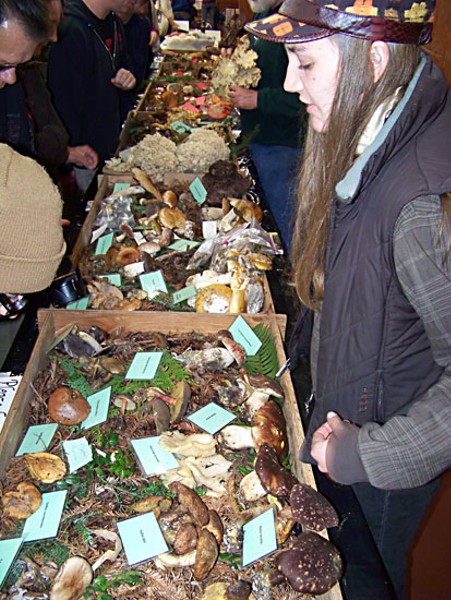 A few days before a voracious mob jostled into the Humboldt Bay Mycological Society's 30th Annual Mushroom Fair at Redwood Acres in Eureka, Ann Marie Tedeschi was prowling around Big Lagoon with a friend, hunting for mushrooms. They found some king boletes. They also found a big, fluttery branch-like mushroom resembling a pale yellow sea coral.

Tedeschi brought the mushrooms home and sauteed them in olive oil with garlic. Yum.

But on Sunday afternoon at the mushroom fair, Tedeschi, her long, ropy dreds swept neatly back under a scarf, stood in front of a wood bin loaded with samples of edible coral mushrooms side-by-side with samples of similar looking, but toxic, corals. To her left, at another bin, an intense volunteer, looking like a stern trumpet master, clutched a huge, funnel-shaped Gomphus floccosus in his left hand and a spore print of it in his right hand and leaned forward to stare into the faces of several mushroom novices as he went over the basics. "I try to educate people," he was saying, "and tell them to organize their mushrooms into four groups: gills, ridges, pores and teeth."

Ignore that advice, his piercing gaze seemed to indicate, and you risk a bellyache from this old Gomphus, a chanterelle of the less edible sort.

But Tedeschi's eyes were fixed on the graceful corals. How, she asked the volunteer behind the corals bin, can you be sure you've picked Ramaria rubiginosa (an edible coral) and not Ramaria formosa (a toxic coral)? And if you've already eaten one that you thought was edible, but now you think it maybe was poisonous, what symptoms might you expect to be feeling, and when?

"My stomach feels funny," Tedeschi said. "And I feel a little hot."

Moments later another volunteer, Don Bryant, reassured her. "Nothing in the coral family is too toxic," he said.

But damn. If you happened to be at that mushroom fair on Sunday, and you are a rookie at even the simplest of mushroom identification, two things might have made you queasy: The realization that there are a gabillion people interested in mushrooms, and the fact that there are a gabillion kinds of mushrooms. Combine the two, and you get a whole lot of potential mushroom eaters potentially gobbling bad fungi.

Not everyone at the mushroom fair was after edible info. Some -- like the group of post-teen slouchies who sauntered in holding tiny, pointy-capped mushrooms in their hands then beelined to the "Let us identify your mushroom" table, saying, "Let's go see if they're psychedelic!" -- had enhanced-eating notions. And others wanted to know what the funny/cute/gross thing was that had popped up in their yard overnight after the big rain. In fact, said mycological society president Joann Olson, this year's fair had a record attendance: 1,500 people by 2:30 p.m., and an hour and a half to go. The last record had been 1,100 people in a day.

A lot of people were signing up to join the mycological society, as well -- so many that the group ran out of forms. Mycological society member Vanessa Laird, standing by a bin of different edibles, said joining the society was a great way to learn your mushrooms, plus gain some ethical and legal savvy.

If you go mushroom picking, you need a permit -- one per individual -- to pick on public lands. The Bureau of Land Management sells a limited number of commercial picking permits to gather the tan oak mushroom -- matsutake -- in certain areas. The BLM also gives out free personal-use permits. Both permits come with maps and regulations. For instance, commercial pickers cannot harvest in the Headwaters Reserve, the Samoa Peninsula, wilderness or proposed wilderness areas or certain other protected places. And, the matsutakes have to be hand-picked -- no rakes or leaf-blowers or other disruptive tools. Personal pickers also must gather their mushrooms delicately, and they have to cut them one inch from the cap or straight through the middle -- that's to make sure personal permittees don't try to sell their finds, because buyers don't want cut mushrooms.

Similar rules apply on the national forest. Last week by phone, Bill Rice, Six Rivers National Forest's district ranger on the Lower Trinity District, said already some folks had been cited and fined for picking mushrooms improperly. One guy was dinged $175 for picking 10 tans (matsutakes) in the nearby Orleans district recently. He didn't have a commercial permit, but he had left the shank -- the stem -- intact. The law enforcement officer, who had pulled him over on a dirt road to check for permits, also made him cut the shank off every single one of the mushrooms.