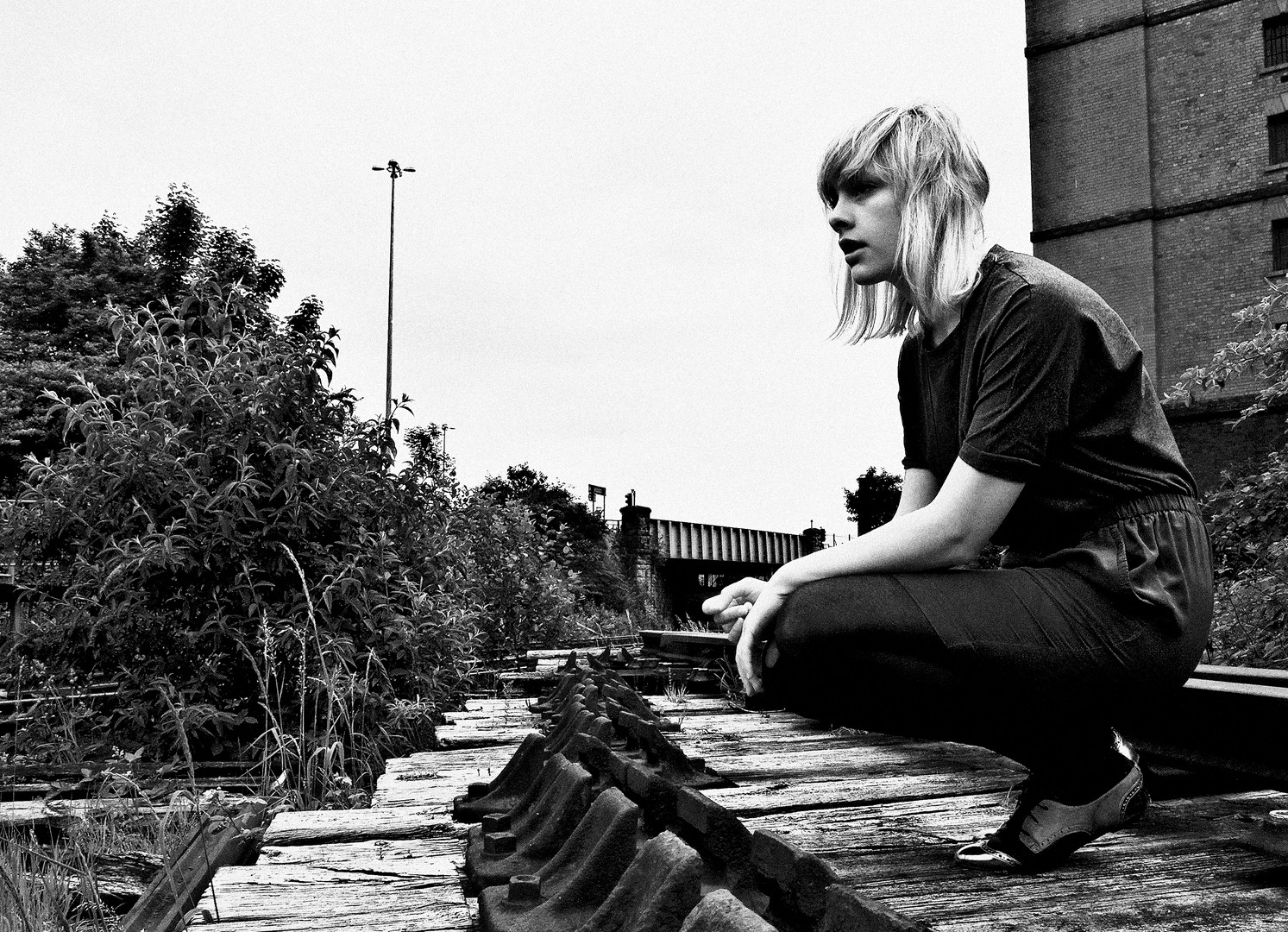 About a year ago, Anika had pretty much given up on the music business. The German-born singer had been shuffling back and forth between Berlin and Bristol, England, and was shifting into writing about politics when she was pulled back in.

As she explained in an email interview, "After a frustrating seven years battling the music industry as a promoter, label founder, venue manager, festival shareholder, band manager, I had decided to call it a day. Just a week after handing in my notice, I received a call from a strange man named Geoff who had been given my number by a mutual friend, asking whether I fancied meeting him and his band. He'd been told that I had weird lyrics, a weird voice and a whole lot of issues with the music industry.

"The last thing I wanted to do was front a band. I think this is what appealed to Geoff. I was just pissed off and wanted somewhere to vent my frustration."

She didn't figure out until a few days in the studio that she was working with Geoff Barrow, formerly of Portishead, now fronting an outfit called Beak>. The sparse music they made together is hard to place. With its elements of post-punk and dub, the closest comparison might be to Brit Adrian Sherwood's obscure African Head Charge recordings. Anika's lyrics and song selections, including a dubby version of Dylan's "Masters of War," show that she hasn't quite left politics behind.

Can music and politics mix?

"I always juggled working in both sectors but never thought the two could work symbiotically," said Anika. "I assumed I'd have to, one day, choose one over the other. It was a choice of passion over mind. Somehow finding my way into this project was an unexpected turn of fate.

"So this was how Politics met Music. I get the chance to embrace what I love about the industry and therewith experiment with my artistic hankerings, whilst at the same time get to voice my opinion about social, political and music-industry related issues."

Anika and company are making their way down the West Coast with a stop in Trinidad Tuesday, Oct. 18, for a show at the Ocean Grove. Local/international floorcore stars Starving Weirdos open. DJ Zanapod spins between sets.

Grand opening night for Nocturnum a few years back featured the high priest of the Temple of Hip Hop, "The Teacher," KRS-One, laying down wisdom in rhyme. The same Tuesday Anika plays the OG, The Teacher returns for a free show with a few hip hopper friends in tow (Rise, Consise and Krookid, Killjoy and Frequently Faded). Free? Really? How could that be? Well, it's the Ron Paul Rock the Revolution Tour, which means it's a political rally of sorts paid for by Ron Paul followers looking to recruit more Ron Paul followers. What do these rappers share in common with the rebel Republican? I'm sure they'll tell you Tuesday -- in rhyme.

Meanwhile, that very same Tuesday at the Jambalaya, King Yellowman, king of the Kinston dancehall toasters of the early '80s, a living legend whose riddims were sampled by early hip hoppers, is here with his Sagittarius Band. Northtown Dub opens. (N-Dub also plays Thursday at Six Rivers.)

"I'm just a human being trying to make it in a world that is very rapidly losing its understanding of being human." So says poet/musician/actor/activist John Trudell, who returns to the Mateel Saturday for the Third Annual Meals For Real Benefit in support of the community center's hot lunch program. Trudell will be joined by Quiltman in Tribal Voice, with Johnny Indovina and Sound of the Blue Heart sharing the bill; local fave Rockstar Ray opening. Come early for dinner from the same Mateel chefs who make lunch.

After years in the second guitar chair in the Django-esque John Jorgenson Quintet, Argentine guitarist Gonzalo Bergara formed his own quartet and took the lead. He returns to the Arcata Playhouse Saturday for another evening of hot jazz.

Of course Arcata has its own Hot Club-style jazz combo, Bon Swing, led by lightning-fingered guitarist Tom Toohey. You can hear that band swing Friday night at Café Mokka or Saturday at Libation.

It was five years ago when young guitarist Will Nicoll met drummer Matt Moss and formed the high school band Steel Toed Slippers. After graduation, the guys moved to L.A. to pursue rock 'n' roll dreams and ended up playing legendary clubs like the Whiskey A Go-Go and The Roxy, while working in the studio with the likes of Stephen Perkins of Jane's Addiction. The Slippers return home this weekend to rock Fieldbrook Market (Friday) and Central Station (Saturday).

Another former local, Jerry Joseph, returns to Humboldt Brews Friday with The Jackmormons. Decades ago, Joseph was in Roots Rockers, one of the first reggae rock bands in Humboldt (it later morphed into Graffiti). In 1980, he formed Little Women (more reggae/rock) and relocated to Utah. After hopping around the country a bit, he's now working out of New York City playing his deeply personal songs in a basic power trio.

The Mustache Bash Friday at the Red Fox features a dance-provoking soundtrack by Masta Shredda, Mike D and MXMSTR KRSHNG2N. No mustache required. ("One will be provided for you at the door.")

World Famous Productions takes over the Arcata Theatre Lounge for a couple of nights of bass-heavy electronica this weekend. Thursday it's a post-Burning Man fundraiser for the Fractal Nation posse with Random Rab, Auditory Canvas, Anahata and Kintenium. Saturday's Frite Nite Formal is a Frite Nite label showcase with Anna Sia, EPROM, NastyNasty, B. Bravo, SALVA, Comma and Epcot. Formal attire is optional. (Friday, in between those shows, the ATL offers '80s dance music by Eyes Anonymous.)

Get your green on Sunday at the Kate Buchanan Room as Cherish the Ladies celebrate the music of Ireland. Twenty-some-odd years ago penny whistler/flautist Joanie Madden gathered with like-minded women to play a few Celtic tunes, naming the band for a traditional jig. Ladies have come and gone, but the notion of showcasing the chops of females in a mostly male-dominated field remains.

Aside from the Eureka Symphony season, pretty much the only shows coming up at the Arkley Center in coming months are tributes to bands and musicians from days past. Pink Floyd, Beatles, Sinatra and Beach Boys tributes are pending. But first we have Heartbreaker: The Led Zeppelin Concert Experience coming Saturday night. If it's anything like the Beatles tribute I saw at the A-Center, you can expect guys in period costumes and bad wigs playing the all hits you love. Yes, they'll do "Stairway to Heaven."

An arguably classier variation on the tribute theme is the full album homage with a band taking off on some classic record. Phish does it regularly; Beck has done a series of them with his Record Club concept albums. Wednesday, Oct 19, at Humboldt Brews Karl Denson's Tiny Universe pays homage to one of my favorite Rolling Stones albums, Sticky Fingers ("Brown Sugar," "Wild Horses," "Dead Flowers"), with Denson expanding on the Bobby Keys sax parts ("Can't You Hear Me Knocking") among other things. New Orleans' singer/guitarist Anders Osborne is along on the tour to help out on vocals etc. Extra bonus: The full Anders Osborne Band opens the show. Should be great.