My Conversation with Richard Ehle

As a reporter, there are moments you remember with incredible clarity. Sometimes it's because the moments are monumental, like when a source called in 2007 to tell me a criminal grand jury had just indicted two Eureka police commanders on manslaughter charges. Other times, it's because they pull at your heart strings, like when I watched a father stand in a San Francisco hospital overlooking the Golden Gate Bridge and tell his 4-year-old son, "Someday, we're going sail under that bridge," moments before the boy was wheeled away for kidney transplant surgery. And sometimes it's just something peculiar that leaps out at you, like when I looked down in the Eureka Woman's Club in 2008 to see that then Gov. Arnold Schwarzenegger was wearing custom cowboy boots emblazoned with the seal of the governor's office. 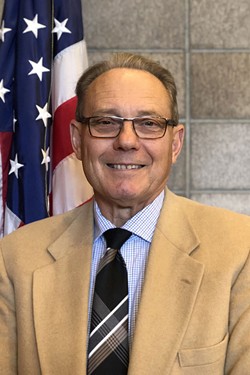 My interview with then Interim Arcata Police Chief Richard Ehle around noon on Nov. 5 was one of those moments. I'd been trying to get ahold of him for a few days, since the Times-Standard broke news Oct. 31 that Ehle's department was finishing its investigative report into the stabbing death of David Josiah Lawson and hoped to submit it to the Humboldt County District Attorney's Office the following week. I was playing a bit of catchup and honestly wasn't expecting any big news from the conversation, just looking to confirm what the Times-Standard had already reported, maybe with an additional detail or two. Then Ehle started talking.

I should back up for those who haven't been following the intimate details of the Lawson investigation over the past week or so. Shortly before 5 p.m. on Friday, March 29, Humboldt County District Attorney Maggie Fleming issued a press release, one I'd requested, responding to a statement Lawson's mother, Charmiane Lawson, had released a couple days earlier, criticizing the Arcata Police Department's investigation into her son's killing and calling on Fleming to turn the case over to the California Attorney General's Office. In her response, Fleming indicated that she agrees with Lawson that any future prosecution should be handled by the Attorney General's Office, though she argued her office "has made the best possible decisions at every point in this case given the information available to" it.

But, Fleming charged, a perception has emerged among "some members of the community" that her office has a conflict of interest in the case.

"How has the perception of a conflict of interest developed?" she asked in the release. "In part through media coverage that has given extensive exposure and credence to people who have provided misinformation. For example, recent media reports have heavily relied on a statement by former Arcata Police Department Interim Chief Rick Ehle that APD had delivered 'unequivocal physical evidence' in the case. When asked about that statement by the District Attorney's Office, Ehle claimed to have been misquoted. The distribution of misinformation about ongoing cases is unprofessional, potentially cruel and damaging to people involved, and contrary to the pursuit of justice."

Back to my Nov. 5 conversation with Ehle, which was conducted over the phone, with me typing notes into my laptop.

He said the investigation and subsequent report focused almost exclusively on the Lawson homicide and didn't attempt to address any of the flurry of assault allegations that swirled around the 2017 killing. He said the report stopped short of offering prosecutors a charging recommendation but made plain what they thought happened that night. He began walking me through the last steps in the investigation, detailing how his officers had re-interviewed 40 or 50 witnesses in the case and noting that the Department of Justice had changed protocols and standards at its laboratories at one point, which caused a months-long delay in forensic testing.

He then made some comments about the original murder charge filed against Kyle Zoellner, who had been arrested at the scene of the killing, and how the case against him had fallen apart at a probable cause hearing because detectives hadn't had time to conduct a thorough investigation, leaving a circumstantial case without any eyewitnesses, video or forensic evidence. He said that despite the delays, the DOJ forensics laboratory had been helpful, noting, "Finally, they did get their process straight."

I asked if the case was still a circumstantial one and he said no, that investigators had found direct evidence.

The phrase jumped out at me, as I couldn't and still can't recall another police chief making such a, well, unequivocal statement about the state of evidence in a potential murder case. It was a bold statement and I asked Ehle to elaborate. He said there was DNA and fingerprint evidence that could now be coupled with the suspect's "motive, opportunity and means" to commit the crime. He meandered into talking about how many resources the city and his department had put into the case. But I wanted to make sure I'd understood what he was saying correctly.

I can't remember my exact phrasing — I don't have a recording of the conversation, only my extemporaneous notes — but I said I wanted to back up and make sure I understood him properly. "You're saying that you think there is 'unequivocal physical evidence' linking a specific suspect to Lawson's death?" I asked.

I went on to ask Ehle some questions about police presence at city council meetings before getting off the phone, printing out my notes at about 12:30 p.m. and posting my story about the status of the Lawson case a little more than an hour later. Recognizing the gravity of Ehle's statement, I put it in the headline: "APD Interim Chief: There is 'Unequivocal Physical Evidence' in Lawson Case."

We would go on to repeat the phrase multiple times over the ensuing months in background paragraphs in our reporting as the district attorney's office reviewed the case and Lawson's mother, Charmaine Lawson, publicly vented her frustration amid a series of vigils and protests. And finally, we repeated the phrase again when a criminal grand jury convened to consider the case opted not to indict anyone related to Lawson's death.

We repeatedly used the phrase in our reporting because it seemed remarkably important, either speaking to the strength of the case, which then raised questions about the district attorney's office's handling of it, or about Ehle's honesty and competence — both of which touch on questions surrounding APD's handling of the case from its inception. Either way, it seemed noteworthy. And, I'll add, not once did anyone challenge the veracity of the quote to me or anyone at the North Coast Journal. That is, until Fleming's press release 144 days later.

I stand by my reporting and honestly find the notion that a police chief would believe he had been misquoted in a headline — with a quote of this gravity in a case of this sensitivity — and not take any steps to contact the reporter or newspaper somewhat mindboggling. I find other aspects of Fleming's press release equally confounding.

It's hard to tell from the passage quoted above if she's charging that we somehow should have known Ehle's statement amounted to "misinformation" or whether she's blasting him for saying what he said. It's noteworthy to me that she used the word "claimed" when referring to Ehle's statement that he was misquoted. It's not a word we typically use in journalism — we prefer a straightforward "said," as "claimed" intones that the credibility of the speaker is in doubt. The parsing of words aside, I'll say that when a police chief makes a bold public statement about an incredibly high profile case and we have no information to contradict that statement, it would be unprofessional and unfair to simply withhold the quote from our readers.

I asked Fleming if, when Ehle claimed I had misquoted him during a meeting in which she and a number of her employees were present, anyone thought to reach out to me or the Journal to make us aware of the claim or challenge the veracity of the quote.

"It never serves justice for our office to get into the details of cases in the media, including ancillary details involving outside parties," she wrote in an email. "Of course our focus was on the prosecution of the case."

That statement is hard to square with her March 29 press release, in which she excoriates media coverage — ours — for impacting her office's ability to handle prosecution of the case.

Moving forward, Fleming indicated she would make an official request this week for the Attorney General to step in, though it will be entirely up to that office whether to take on the case.

No matter the decision, I think there are some things Fleming should keep in mind. The perception among those I've talked to who want to see state prosecutors and investigators take over the Lawson case isn't that Fleming's office has a conflict of interest. It's a lack of confidence in the office, stemming from the perception that it has mishandled aspects of the case and isn't doing all it can to bring whoever killed David Josiah Lawson to justice. There's a big difference.

But the bigger question here is why even issue this press release in the first place? Why the need to refute Charmaine Lawson and flog the media? If deemed necessary, why not just quietly request the Attorney General's intervention?

Reflecting back on Fleming's own words, it's hard to see how this press release "serves justice."