MMIW isn't statistics. It's my family. 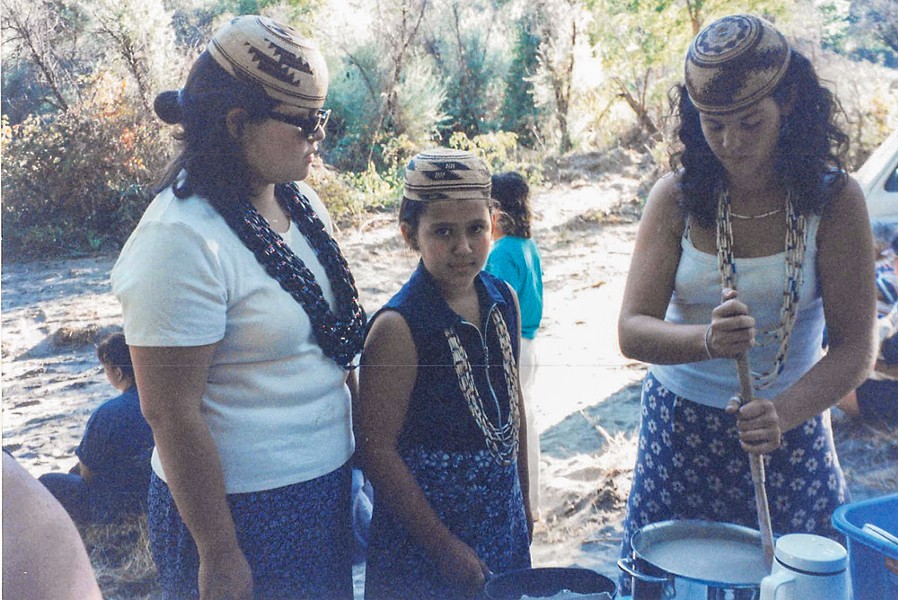 Submitted Left to right: Cutcha Risling Baldy, Emmi and their cousin Viola Williams preparing acorns at a brush dance in Orleans when Emmi was young. 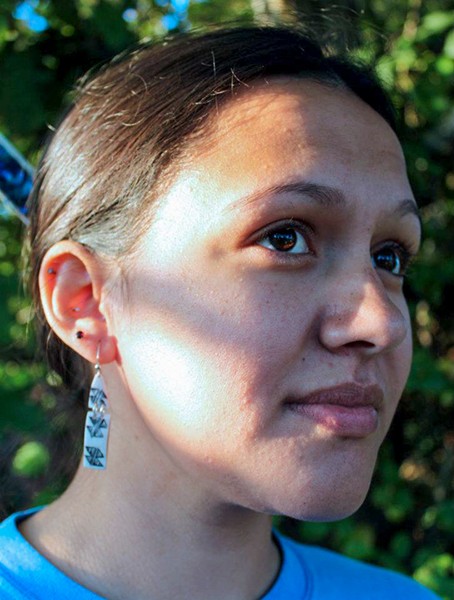 Contribute to organizations working toward solutions

Editor's note: According to the Sovereign Bodies Institute, there are 183 cases of missing and murdered Indigenous women and girls in California, including 18 reported last year alone. One-hundred-and-seven of those women and girls are from Northern California. This is the experience of a single family member of one of the missing, illustrating the reverberating impacts each one of these cases has. May 5 is a national day for honoring Missing and Murdered Indigenous Women, Girls and 2 Spirit people. Across the nation, organizations, community groups and tribes will be gathering to call attention to this ongoing issue.

One summer my aunt and uncle asked if I would babysit my little cousin Emmilee since they both had work and I needed money for gas. She was 6, maybe 7, and while I didn't love having to show up at 8:30 every single morning during summer vacation, she was always excited that she got to spend the day with her "cool cousin." We watched a lot of Friends; she was slightly too young to get most of the jokes but she laughed alongside me like she did. We played a lot with my makeup, we did each other's hair and she loved to pick out outfits for me to wear. We'd walk to the park together for picnic lunches. She liked to make daisy chains. We spent a lot of time talking about all the things we could dream into being: a store that had skirts made entirely of licorice, a restaurant where everyone would sing along to music like in a musical, aquariums where you could swim with the jellyfish. Many years later, when I had my own daughter, Emmi would offer to babysit, and she would tell my daughter stories about us, like we'd had a summer of crazy adventures, not just short walks to the park but epic day-long journeys, fantastical tales that she said reminded her of how magical life could be.

Emmilee Risling went missing in October of 2021. There have been several reports of her last known whereabouts, though current search efforts have focused on the Pecwan and Weitchpec areas on the Yurok Indian Reservation. This past week, the Jon Francis Foundation brought volunteers and assembled a team and cadaver-sniffing dogs to search remote parts of Yurok territory in hopes of finding additional clues or locating Emmi. They worked with local law enforcement on this effort, waking early each morning to cover a massive area that included parts of the Klamath River. They didn't find Emmi but are hoping to coordinate future search efforts. One of the reasons the search was so important was because of the influx of resources that the Jon Francis Foundation brought — resources that were not available for our family when Emmi first went missing. The coordination of something like this was monumental for our ongoing efforts to find Emmi, efforts that will continue until she is home.

Emmi's disappearance felt like the culmination of years of struggle for her, built from ongoing mental health issues, drug abuse, abusive relationships, poorly resourced justice and mental health care systems, and ongoing jurisdictional and legal issues that have continued to put Native American women at increased risk of violence, trafficking and sexual assault, with one of the highest rates of unsolved cases in the nation.

I can repeat statistics. I've researched and written, taught courses and made lesson plans to help people understand the ongoing issues with Missing and Murdered Indigenous Women (MMIW) in the United States.

Native American women are murdered and sexually assaulted at 10 times the national average in the United States.

95 percent of missing or murdered Native women cases were not reported by the national news media.

California is one of the top 10 states for MMIW cases.

And, according to the Yurok Tribe's Year Two Progress Report for the To' Kee Skuy' Soo Ney-Wo-Chek' (I Will See You Again in a Good Way) Project, the Northern California region, including Yurok Country in Humboldt and Del Norte counties, had the highest share of MMIW, with 36 percent of all cases in the state, despite being home to less than 2 percent of Native people in California, according to the U.S. Census.

The Yurok Tribe issued an emergency declaration in December in response to the rates of missing persons impacting tribes and Native families and communities across Northern California. What our family has experienced navigating this ongoing crisis is that resources are not readily available for things like massive searches, private investigators, search and rescue animals, or even family advocates to help navigate a criminal justice system that is not set up to assist grieving families.

This has been an issue since the influx of western colonization, tied to the stealing of our lands alongside the stealing of our women and children. In the 1800s, when the state of California established laws that enslaved California Indian peoples, the highest "bounties" paid for Indian "apprentices" were for young Indian girls. In Humboldt County, records in the mid-1800s indicate most California Indian people taken into slavery were children ages 7 to 12, and most of those were girls. Records also show many of our women were "taken" during this time, though they are not reported in the records as being sold into slavery. Instead, they disappeared and likely ended up either murdered, sold to brothels or forced into marriage. These types of exchanges are not necessarily a part of the western archival record, but we learn about them in our own tribal stories, passed generation to generation in order to fill in the blanks.

My mother often talks about letters she would find in the archive from Native parents begging for the head of the fort to find their daughters. "My daughter is missing," they would write, "they came and took her. Please help me find my daughter." Native people, for as long as this colonial system has been in place to steal our people, have been searching, organizing, reaching out and refusing to give up. Their letters live on in an archive of our attempted genocide. The settler system of governance and law has continued to put up road blocks to protecting us. Fifty percent of violent cases against Native women go unprosecuted. The numbers of missing Native women continues to grow. And family after family is forced to reckon with who they can plead with next: "My daughter/sister/auntie/cousin/friend is missing. Please help me find them."

I have a hard time talking about Emmi like she is a story to share to try to change a policy or update a law. Those things need to happen. Support the Native organizations doing the work to protect our peoples on the ground, like the National Indigenous Women's Resource Center, a Native-led nonprofit that provides policy development to strengthen tribal sovereignty.

But Emmi isn't just a story or a statistic. She is my family, my baby cousin. She has always been a thoughtful and caring person. After graduating from the University of Oregon, she worked primarily in social services, helping Native families and children. She volunteered with Native organizations, like the Native Women's Collective. And she was always helping at cultural ceremonies, welcoming people as they came together in prayer and song. I can also tell you about how she struggled with mental illness and how there was no way to help her, how often we tried to intervene, the moments we watched as she was passed from agency to agency, how often it was recommended that she be hospitalized or kept in a facility only to be dismissed by a judge or a prosecutor, how she became a statistic to them instead of a human being struggling and spiraling until she was mostly defeated.

Or I can tell you about listening to my mother describe what it has been like these past few months: "When I think about my niece, I cry. I cry for my brother, her father. I cry for her children. I think it is OK to cry out like this so that somebody, anybody, might hear it and they might say something that will help us find her again."

Grief for the missing is different, it's almost dull but ever present. There are more questions than answers and every day feels both hopeful and hopeless at the same time. I don't want to think about Emmi like a statistic or a cautionary tale, or even just as a story of a system designed to disappear us.

I want to think about how she can inspire us to create, sustain and center who we are as a community. How can we care for each other? Emmi cared for people.

I think people know more than they are saying. Come forward.

If you know something about her or any other case, come forward. There is a family there, desperate for answers, and silence or secrecy will only fester a community wound, a missing mother, daughter, cousin, friend.

I also know that people want real answers to how they can help, or what needs to be done.

The Yurok Tribe continues to do important work to document and find real ways to address how we can support MMIW families. They are looking for more funding and assistance and need people to call our congressional and legislative representatives to say they should fund the Yurok Tribe's ongoing work. The Hoopa Valley Tribe (where Emmi is enrolled) continues to build. They're on-the-ground support for MMIW families, as well. We need our Legislature to step in and provide unrestricted funding for family assistance. Humboldt County should provide funding for a task force that can distribute real funds and build responses to this ongoing issue. There's policy that needs to be written and implemented. There are organizations that should be supported to continue the work of building mental health programs in our communities. Tribes, tribal organizations, tribal peoples have been chronically underfunded, resulting in these disparities.

At the end of the day, I can't help but flash back to the last time I saw Emmi. She hugged me tight. Her sentences were jumbled, her eyes darting from place to place, and it seemed like there were too many thoughts in her head all trying to come out at the same time. "Cutcha," she said, "I can see you. I know you can see me."

I kept trying to get her into my car. I kept saying that she shouldn't walk alone down the busy road. I offered to have my husband take her to where she was staying. She was barefoot and wet from the waist down. She was carrying her shoes.

She repeated, "Cutcha, I can see you. I know you can see me."

So I paused for a moment to just look at her.

She hugged me and whispered in my ear, something that I couldn't understand.

She hugged me again and then walked off into the field, the tall dried grass blowing in the wind around her.

Editor's note: A GoFundMe account has been set up to help cover the costs of future searches for Emmilee Risling. It can be found at www.gofundme.com/f/search-efforts-for-emmilee-risling.