My Favorite Waste of Time 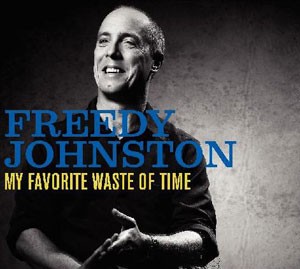 Singer/songwriter Freedy Johnston is a strange artist. His last studio record, Right Between the Promises, was released in 2001. Since then, he has released an album of unreleased material, The Way I Were: 4-Track Demos, 1986-1992 (2004), and a solo concert album, Live at McCabe’s Guitar Shop (2006). So, it’s odd that his new studio album in seven years is a collection of cover songs. And, furthermore, it’s a strange selection.

Johnston has never shied away from recording and performing cover songs during his recording career, starting in 1990. For his EP, Unlucky, which was released at the time of his excellent second record, Can You Fly, he released a blistering version of Jimmy Webb’s “Wichita Lineman.” He also included a version of Edison Lighthouse’s “My Love Grows (Where Rosemary Goes)” on Right Between the Promises. Over the years, he has played Elton John’s “Rocket Man,” The Hollies’ “Bus Stop” (which he initially released on his first live record, Live at 33 1/3) and Bad Co.’s “Can’t Get Enough of Your Love,” among others, in his live repertoire. He also occasionally performs with musicians Jay Moran, James “Pie” Cowan, Duke Erikson and Butch Vig, known as the “The Know-It-All-Boyfriends,” a (somewhat) all-star cover band.

My Favorite Waste of Time has a terrific core band, Nashville-based musicians Bob Babbit (bass), Ed Greene (drums, percussion) and Andy Reis (electric guitar and sitar). The execution and sound are tight; the arrangements are true and inventive. The legendary steel guitar player Al Perkins, for example, lends a nice riff for the Burt Bacharach/Hal David cover, “Do You Know the Way to San Jose?” The lyrics that recall San Jose with wide-open spaces (as opposed to Los Angeles being thought of as “one long highway”) are so dated, one needs not wonder whether Johnston is singing this with a great sense of irony. The opening song and title track, Marshall Crenshaw’s “My Favorite Waste of Time,” fits Johnston’s own pop sensibility like a smooth glove, as does the following number, NRBQ’s “I Want You So Bad.” The Hollies’ song “Bus Stop” gets a makeover from his earlier bare release, with a sitar part and horns that recall the Box Tops’ arrangement for their 1968 hit “Cry Like A Baby” (written by Spooner Oldham and Dan Penn).

Then there are the oddball song selections, including not one but two mid-1970s Paul McCartney/Wings songs, “Listen to What the Man Said” and “Let’em In.” This may be Johnston’s own nostalgic connection to his youth, but there is a plethora of McCartney songs to choose from (like “Ram On” or “Dear Boy” from 1971’s Ram). And Matthew Sweet’s “I’ve Been Waiting” and Tom Petty’s “Shadow of a Doubt” are not rearranged enough to be distinct from the original versions. Why didn’t he simply record a version of aforementioned “Rocket Man,” which he has delivered in live performances with a sad sincerity and moody arrangement?

My Favorite Waste of Time has a feeling of a “warm-up” record, with the expectation of a new album of originals that one hopes to meet the standards set by the brilliance of 1994’s This Perfect World (which was produced by Vig) and 1999’s Blue Days Black Nights. This record is encouraging in that Johnston has finally released a studio album, but it’s also one filled with anxiety — for something more, something that displays Johnston’s talent as a singer/songwriter that can far surpass a simple “waste of time.”