My Name is Mud

Matthew McWhat's-his-name rolls in something stinky

by Henry Ellis and Ryan Burns 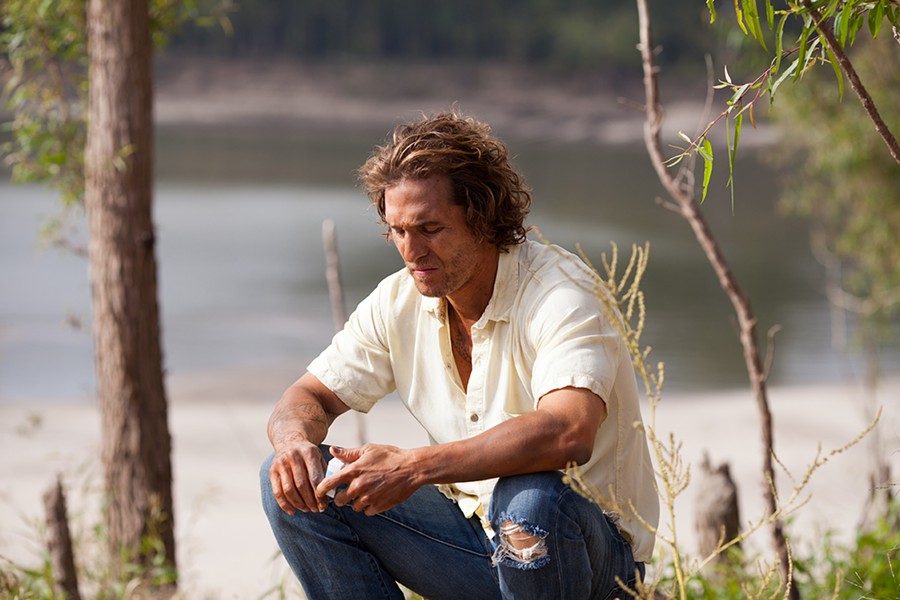 "Man, my cuticles are ruined." McConaughey in Mud.

MUD. Jeff Nichols has read too many middle school novels, and it shows. His most recent venture into the realm of writing and directing, Mud, is a two-hour display of cheap drama and sickeningly thick foreshadowing, with an ending that doesn't come soon enough.

I'm in the minority with my opinion of Mud; most critics have showered it with praise. Some people may like a two-hour drama centered on the repair of a boat, and some may like the lead actor. But for me, Mud is formed from dusty clichés and watered-down drama.

Set in a poor river town in Arkansas, Mud tells a story about 14-year-old Ellis (Tye Sheridan) learning the all-too-real truth about love and trust from the title character (Matthew McConoheyheyhey — I don't know how to spell his name, and I don't respect him enough to learn). After killing his ex-girlfriend's abusive boyfriend, Mud goes on the run and takes refuge on a secluded, river island. His hiding spot is soon discovered by the adventuring Ellis and Neckbone (Jacob Lofland), who are surprised to find a hobo living in a boat, in a tree — in their boat-in-a-tree, which they found fair and square. The fugitive strikes a deal with the teens: help him get the boat into the water and they can have his pistol.

Mud is one of those films whose ending you can decipher within the first 10 minutes; Nichols (Take Shelter) seems to think you need to the full two hours to appreciate what's obvious and inevitable. And in case you forget what you thought might happen he peppers the movie with redundant foreshadowing and a dash of cliché for that extra kick. The plot of Mud leaves a dirty taste in your mouth.

Nichols' choice of predictability over emotionality pays off for no one, least of all his cast of talented actors (excepting McConahooey). The two lead adolescents, Sheridan (The Tree of Life) and Lofland (in his debut role) are talented beyond their years, offering a subtlety that Nichols' script doesn't require. Sarah Paulson (American Horror Story) and Ray McKinnon (Sons of Anarchy) are Ellis' divorce-destined parents (of course), and Michael Shannon (Boardwalk Empire) is Neckbone's immature but loving uncle (of course Neckbone is an orphan). I could have used more Shannon; he's a great character actor, and he offers the only comic relief in an otherwise stale and depressing story. PG13. 130m.

IRON MAN 3. Ever since Disney bought everything I love (Marvel, LucasFilm, Pixar), I've been in a sequel-induced state of ennui. Don't get me wrong: This malaise doesn't keep me from seeing all the new Marvel films. But I've learned to leave my need for nerd-accuracy at the door. This was easy for Iron Man 3. How could I not see it? What, am I too good for Sir Ben Kingsley? Definitely not.

IM3 delivers everything you'd expect based on the last two films: Tony Stark snark, entertaining explosions and a loose interpretation of the laws of physics. The supervillain of choice this time is The Mandarin (Kingsley), a terrorist bent on destroying the false happiness and commodity dependence of the American Dream. Stark (Robert Downey Jr.) sets out to destroy The Mandarin, only to realize the terrorist plot is more complex than he'd imagined. His regular anxiety attacks following the epic battle of The Avengers don't make his heroism any easier.

It's your typical "Yeah right, Science" sort of sci-fi, with more than enough action to convince kids that science is cool. This time, though, an actual kid drives this point home: Stark's triumph is aided by the help of a precocious pre-teen, Harley Keener (Ty Simpkins).

Guy Pearce — the skinny man's Val Kilmer — is the secondary villain, Aldrich Killian. (You know he's bad because his last name has the word "kill" in it; comic books are subtle like that.) He's your typical super-scientist gone wrong, and Pearce captures the comic kitsch of this role perfectly. Don Cheadle and John Favreau reprise their roles, as does Gwyneth Paltrow, though this time she gets to do a bit of the ass-kicking.

It's hard to find many bad things to say about Iron Man 3; equally hard is finding great things about it. At this point, Marvel reboots are what they are. Following action-franchise tradition, each installment has more explosions than the last. And each new Iron Man has had more Iron Men (Iron Mans?), just as the Jurassic Park series kept adding T-Rexes. If Iron Man 4 doesn't have an entire army of marching Iron Men, I will eat my hat. PG13. 130m.

Pixar's whimsical and romantic sci-fi WALL-E (2008) plays at the Arcata Theatre Lounge Sunday at 6 p.m. And speaking of romance, next Wednesday's Sci-Fi Pint and Pizza Night will feature The She-Beast, a 1966 British-Italian horror movie about a reincarnated 18th century witch hell-bent on avenging her own death. 6 p.m.

42. This Hollywood biopic about baseball color-barrier-breaker Jackie Robinson is so glossy it all but glosses over the issue of racism. PG13. 128m.

THE BIG WEDDING. Let's hope no wedding is ever as bad as this formulaic, low-brow comedy. Shame on these famous people. Shame. R. 89m.

THE CROODS. A prehistoric family must look for a new cave in this likeable animated comedy featuring the voices of Nic Cage and Emma Stone. PG. 96m.

EVIL DEAD. This gory remake of the 1980s camp-horror classic about a group of young'uns, a cabin in the woods and a skin-bound book has less camp, more viscera. R. 91m.

JURASSIC PARK. This week the dinos are back to two dimensions. PG13. 127m.