Myth of the Invisible Ships 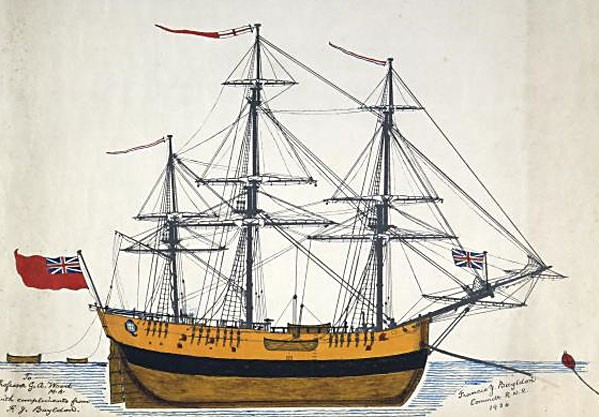 Have you heard of the invisible ships phenomenon, cited in several new-age books and movies? It goes like this: When Captain Cook/Columbus/Magellan (depending on the version of the story you're hearing) arrived at the coast of Australia/Cuba/South America, the native people completely ignored them, presumably because huge ships were so alien to their experience that "... their highly filtered perceptions couldn't register what was happening, and they literally failed to 'see' the ships." (Quoting here from JZ Knight's What the Bleep Do We Know?)

The story seems to have originated with Joseph Banks, botanist on Captain James Cook's 1770 voyage. On several occasions while they were off the coast of Australia, he commented that the natives paid virtually no attention to the 106-foot long Endeavour. On April 28, sailing north along the east coast of Australia, he recorded in his diary that fishermen "... seemd to be totaly engag'd in what they were about: the ship passd within a quarter of a mile of them and yet they scarce lifted their eyes from their employment ... "

Banks seemed to be troubled by not being the star attraction: "Not one was once observd to stop and look towards the ship; they pursued their way in all appearance intirely unmovd by the neighbourhood of so remarkable an object as a ship must necessarily be to people who have never seen one."

However, as soon as the explorers approached the shore in longboats, their attempts at landing were resisted. For instance, "... as soon as we aproachd the rocks two of the men came down upon them, each armd with a lance."

There's a more obvious answer for the odd times when Cook's ship didn't spur a reaction from people on the shore. While we can't disprove the extraordinary notion that the ships were indeed invisible, I think the more prosaic solution is that the natives were living on the edge of survival, and that anything that wasn't a threat or didn't contribute to their well-being could be safely ignored.

And as panhandlers and wheelchair users can tell you, just because you're ignored doesn't mean you're invisible.

Barry Evans' own attempts at captaining sailboats have mostly been unfortunate, so far-- there's always the next time. He lives in Old Town Eureka.