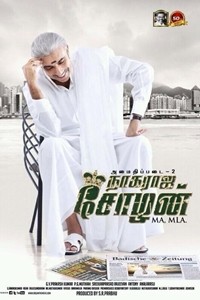 This is a political satire & sequel to 'Amaithipadai' which was considered the best political movie in Tamil Cinema and is also the 50th film being directed by Manivannan. Nagarajacholan, a prisoner, threatens the ruling chief minister of exposing his corruption and as a favor for his silence, gets released & offered Deputy Chief Minister ship. Once in power, Nagarajacholan tries to sell part of a protected public forest to a foreign company to build a resort and eliminates forest officers, who oppose him on the land deal. The Federal Govt appoints CBI officer Rajagopalan to investigate the issue, who unearths evidence with help of eye witnesses. As the chief minister was not amenable to his plans, Nagarajacholan join hands with opponent MLA's to overcome his problem and becomes the Chief Minister. Once in power Nagarajacholan continues his oppression of the tribal's on the land issue. Against all odds CBI officer Rajagopalan, compiles evidence against Nagarajacholan , ensures that Justice prevails and locks him back to prison.

Nagaraja Cholan MA, MLA is not showing in any theaters in the area.