Naming the Sharky Looking Thing on the Beach

Photo by Mike Kelly The jaws of a blue shark with a plastic scientist for scale.

Photo by Mike Kelly A salmon shark and a curious dog on the beach by the Mad River. 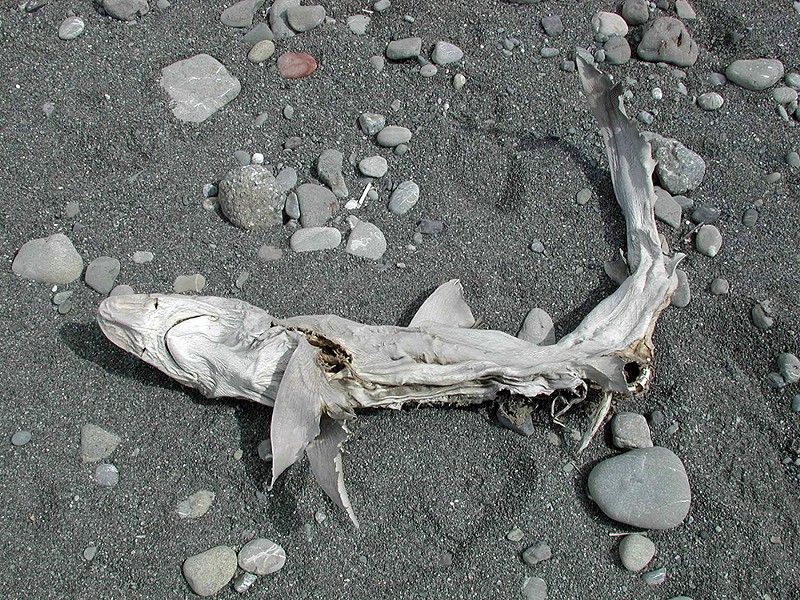 A couple of you may remember my imaginary friend. Well, I had him killed. Every shark I've ever found on a local beach ate him alive. He raised his hand in a final act of defiance as he sank into the bloody water, and a salmon shark (Lamna ditropis) bit off his middle finger.

If you find one, please don't go running up and down the beach incorrectly yelling, "BABY GREAT WHITE SHARK!"

Of course, a small salmon shark looks a lot like a baby white shark. But just think how cool you'd be if you said to the beachgoers freaking out nearby, "That's no baby great white shark. That's a small Lamna ditropis. You can tell the difference between it and Carcharodon carcharias because of this specimen's secondary lateral keel on its caudal peduncle."

My wife, who is not imaginary, I think, says that this hypothetical knowledgeable beachgoer would look like a dick for saying this. She also says I should try to be more useful if I'm going to take up space in a respected paper.

So, here's something useful: The dark gray on the back of a salmon shark extends farther down its sides and snout than the gray upper parts of a white shark. And while an adult white shark has those classic serrated triangular teeth, a baby white shark has teeth that are similar to a salmon shark's — the thin pointy teeth of a fish-eater. The main difference is a salmon shark's teeth have small cusps on either side of the main cusp. Armed with that information, you can now safely take your loud mouth to the beach.

The soupfin shark (Galeorhinus galeus) has the most terrible common name of any animal. This poor shark's name depicts the worst thing that could ever happen to it. It's like naming a man "Castration Jones." But at least little rudderless Castration Jones could still swim.

The Greek origin of the soupfin shark's scientific name means "shark-nose shark," which is like calling it "Sharky McSharkface," which is just another insult to this unfortunate beast. On a positive note, this thin shark reaches 6 feet long, lives at least 60 years and is known to eat lobsters. Well, good for you, little shark buddy — not everything about you is insulting.

I also once found a small blue shark (Prionace glauca) at Cape Mendocino. Blue sharks have curved triangular serrated teeth, so the preserved set of jaws I got from it looks good. The shark was dried out and gray, but alive it's actually very blue on top. It's thin, reaches more than 12 feet long and has a long snout. It can give birth to more than 100 pups at a time and is relatively common in blue water off California. Be appropriately thrilled if you see one.

The brown smoothhound (Mustelus henlei) is another thin shark but it only reaches about 3 feet long. It likes to eat crabs. Its genus name means weasel and, like its namesake, it's a quick and agile predator. But in Humboldt Bay they are known to be a primary prey item of the next shark.

(Also, DJ Smoothhound would be a great DJ name. Unfortunately, I see that it's already taken. Shout-out to the real DJ Smoothhound from Notlob, England, for choosing a great name.)

A large sevengill shark (Notorynchus cepedianus) washed up at Sharp Point a few years ago. It was beaten up and rotting, but I managed to collect some of its distinctive multi-cusped teeth. These sharks are relatively common in local nearshore waters. But take note that they are serious sharks. They are known to feed on seals and have even attacked dogs in shallow water. According to the Internet, at least a dozen people have been injured by sevengill sharks dating back to the 1500s. So basically, don't screw with Notorynchus cepedianus.