Nasty Women in the Kitchen 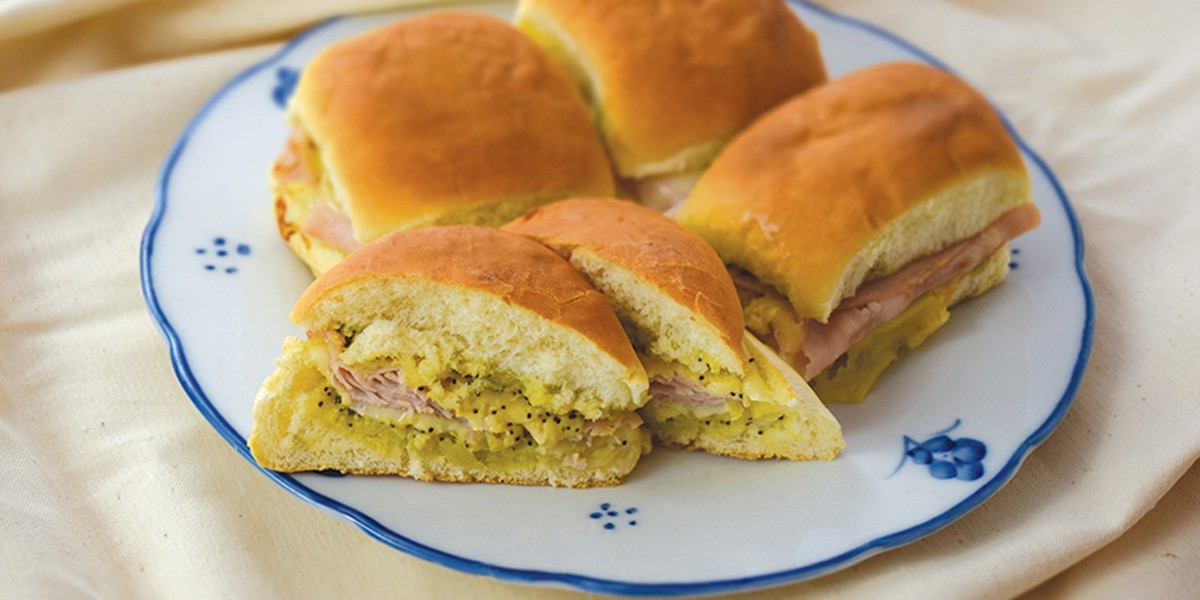 Photo by Holly Harvey Help yourself to a vintage party treat.

Can we agree it's been a long year? Granted, this statement depends partly on one's political persuasion. But for roughly half of us (some would say over half), the fatigue that accompanies the holidays is particularly defeating this year. Given the apocalyptic uncertainty in the air, cocktail parties are not the tradition to skip this holiday season. More than ever, we need soft, boozy gatherings of friends to remind us we're warm-blooded humans capable of leaving the house and believing in the future. Assuming your host has a well-stocked liquor cabinet, what can you bring to the party to buttress the human spirit and distract the troubled mind? Crazy delicious sandwiches. These little hot ham sandos are a throwback to an era when housewives' perms would have fallen out at the mention of making a "low-fat" recipe (or a president who grabs lady parts). My mom introduced us to the recipe at a family holiday party a few years back. Without fully disclosing the volume of butter, she shared memories of her mother making these sandwiches for Christmas parties at the Chambers' brick home in Indianapolis. "They're realllly good," my mom whispered. Her childhood friends dubbed the rich, toasty sandwiches as "Mrs. Chambers' sandwiches" and it stuck.

Amelia Chambers was born and raised in the Polish community of South Bend, Indiana. She was a devoted wife and mother for more than 50 years. She excelled in the art of home economics, a master seamstress who designed costumes in Hollywood before marrying at the spinsterly age of 27. Amelia sewed my aunt's formal wedding dress, a jacket for my uncle made of pelts he'd hunted and matching first-day-of-school outfits for my sisters and me every year. Not surprisingly, she was a force in the kitchen. I remember the week my parents took a rare vacation to Hawaii, leaving my sisters and I in our grandmother's care. Arriving home from school each day, she made us join her in unprecedented chores, like raking my parent's entire pine tree-studded property. Unaccustomed to such labors, I was comforted by the different homemade dessert she served each night — an apple pie baked with real lard is something a 6-year-old never forgets.

Visiting my hometown for a wedding last summer, my mother and I rifled through my grandmother's jewelry box, in case there was something we missed to accent my long summer dress. Among flower-shaped brooches and southwestern turquoise bracelets, we found her old rosary — it was perfect. Though a devoted Catholic at heart until she died, Amelia had to forsake her faith when she married my divorced, Episcopalian grandfather in 1948. Lately, I've been wearing my grandmother's rosary almost daily. I like to think I'm keeping her faith, though different from mine, alive — a small comfort in such confusing times.

If change is the only constant, it's our civic duty to deal with the onslaught of cultural and political upheaval in the forecast for 2017. I wouldn't dare to proffer up advice in such bewildering times. But I have been thinking about Amelia Chambers. In her day, the simple pleasures of an honest ham sandwich (and a lunchtime dirty martini) were celebrated, while women's voices were largely mute outside the kitchen. Though my grandmother enjoyed a life replete with the luxuries afforded to Americans of a certain demographic, I wonder what she could have offered the world had she been less dutiful, less doting and less accepting of the mandates laid out by her husband and her country. As Jan. 20 ushers in a new era in American history, telling the stories of strong, hard-working and talented women like my grandmother will be more important than ever. Platforms and rights for women that social activists have worked to build could perish in the approaching storm. As gloomy as the skies may be, I have faith that women will hold tight to their families, their beliefs and, now more than ever, raise their voices.

Enjoy those holiday parties with extra abandon this year. Give thoughtful gifts, cozy up to the fire, drive safe and make an extra batch of Mrs. Chambers' sandwiches. Like my grandma always said, "There's a lot to eat, lot to eat."

Heat oven to 350°F. Combine the melted butter, mustard, onion and poppy seeds. Spread the mixture on both sides of the buns. Add about 3 slices of ham and 2 slices of Swiss cheese to each. Wrap all 8 buns tightly together in foil. Bake for 20-30 minutes or until cheese oozes out the sides and the buns have a toasty, golden hue. Serve warm to loved ones and neighbors.