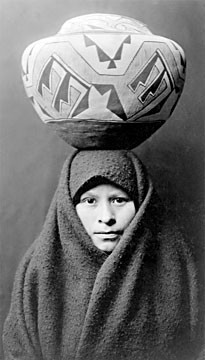 For nine weeks during the summer of 1962 I was in northern New Mexico, on a fellowship to the Santa Fe Opera. In Santa Fe I was introduced to a new kind of Mexican-American food; it was the first since my childhood in Southern Arizona, which had been limited to the tapatio cuisine of Sonora. I also had my first and only direct exposure to American aboriginal cooking.

It was customary for the local Indians to hitchhike along Hwy. 25, and one day I gave a lift to a young man who insisted that I come to Tesuque Pueblo for supper with his family. It was one of the memorable meals of my life.

First was bread, fresh from a clay oven, made entirely without salt. Intoxicating to the nose, in the mouth it became cardboard paste. Then a whole baked pumpkin was cut open, scooped out and served, including pith and seeds — again, nearly impossible to eat. And finally, "chile con carne," tough jerked meat that had been stewing for hours in chile puree. The texture was like a wet dog chew, and it was fiery beyond anything I have ever tasted. If this sounds like a complaint, it is not. I felt privileged to be there. It was a chance to taste food that may have predated the conquistadors. Still, when na?Øve souls romanticize the foods of Native Americans, I am reminded that I have actually eaten it.¬†

Sees God in clouds, or hears him in the wind...

Pope was referring to spirituality, but just as he invidiously compared his "superior" Christian mythology to one that worshiped nature, whites have always chosen to believe that Indians lived in a state of perpetual misery before the arrival of the colonists.

First, it is as absurd to lump together all "Indian food," as it would be to dump all "European food" into one basket. Some Indians lived on verdant land, or had easy hunting or fishing; the Northwest coastal tribes grew wealthy trading dried fish. Others lived in desolate areas, and struggled.

Second, for the general population in the 17th century, Indians ate better than Europeans — if only because the great mass of Europeans lived in dire poverty, whereas Native Americans shared food more equably. And while the colonists deprecated the Indian diet, it was actually a varied one, healthier than those of European peasant monocultures. Deficiency diseases such as scurvy and pellagra did not occur among the Indians.

Both the Eastern woodland and Southwest farming and herding tribes cultivated "The Three Sisters" — corn, beans and squash. In fact, these crops were still recent migrants from Central America by the time the first colonists arrived. (See Simona Carini's Nov. 29 "Table Talk" column for more on the Sisters.)

Land was held in common within the tribe, although farming was an individual undertaking — cultivation required continuity. Foraging, hunting and fishing however were communal, and the food shared by all. Indians were adept at food storage. In fact, the Pilgrims survived their first winter in Plymouth with food found in an Indian cache.

Soups and stews were common in the Eastern tribes, and the Iroquois made a kind of "boiled corn bread," mush combined with nuts, berries or beans, wrapped in corn leaves, baked in the ashes of a fire, then added to the pot as a dumpling. In his 1724 book, Moeurs des Sauvages Ameriquains, missionary Joseph Francois Lafitau remarks, "... nothing is heavier or more insipid; it is a mass of flour kneaded without regard to cleanliness, without either leaven or salt ... They often add oil, grease, beans and fruits. It is then still more disagreeable."

The Iroquois method of trade was a "gift culture": items such as tobacco or maple syrup given, with expectation of reciprocity in equal measure. The early colonists, having no such tradition, took advantage of this. Such trade as did evolve was unequal. Ultimately, guns and gunpowder changed the lifestyle of the Indians, and gradually traditional hunting weapons were abandoned. Fur was fashionable on the Continent, and hundreds of processed pelts might be traded for a rifle and flask of powder. The subsistence culture became one of commercial hunting and trade; communal society was fractured.

The fur and deerskin trades not only introduced new commodities to The Six Nations, they introduced alien systems of value and meaning. The quest for personal wealth undermined old spiritual relationships between hunters and prey. Indian hunters and European traders combined to deplete deer and beaver populations. Eventually consumption outstripped production, and Indians who had become commercial hunters often became debtor-hunters.

Then rum was introduced. Traders and their alcohol devastated Indian communities from Maine to the Mississippi. "You may find graves upon graves along the Lake," an Iroquois chief lamented in 1730, "all which misfortunes are occasioned by Selling Rum to our Brethren."

Throughout North America, prior to the westward press of pioneers, native people exploited their environment ingeniously. In the Southeast, wild peanut, pecan, hickory, wild plum, chokecherry and gooseberry were part of the indigenous diet.

The Plains Indians, whose staple protein was bison, ate a starchy lily root called camas, from which they made bread, as well as tubers with flavors resembling sweet potato and salsify. Many such plants required elaborate preparation to rid them of toxins and irritants. The mountain men, who could always shoot bear and elk for sustenance, would have not given these a second look.

Even in the arid Southwest, mesquite beans, pine nuts, nopales (from prickly pear cactus) and banana yucca supplemented The Three Sisters, together with a wide variety of chiles (so many, in fact, that there are subspecies native to particular villages, like Chimayo, Hatch and Sandia).

And everywhere, Indians ate greens — raw, in combination with other foods, or in whatever stew was cooking — including fiddlehead and milkweed ferns, shoots and stalks of dandelion and nasturtium leaves (which the pioneers named "Indian Cress"). Such plants, of course, harbor vitamins in profusion.¬†

Freshwater eels and trout were plentiful in many locales, along with several species of turtle (turtle eggs were particularly prized). Of game birds, turkey was the most desirable, so admired that Ben Franklin thought it should be the national emblem. Whatever remains in the modern domesticated turkey (speaking of the evils of genetic modification!) has little in common with a bird whose succulent, dark flesh was enriched by a diet of acorns, pignut hickory, grapes and berries.

The idea that subtle aspects of cooking are lost in aboriginal cultures might be another Western conceit. It's true that potherbs abound in the wild, if you look for them. Once, in the Sierras, I recall climbing up to have lunch on a grassy overlook, which turned out not to be grass, but a carpet of young wild onions, a serendipitous addition to our buttered biscuit sandwiches. Wild leeks thrive in the woods of the Northeast. The dumplings of which Father Lafitau complained may have contained maple syrup and meadow garlic, flavor combinations alien to his stolid Jesuit palate.

On the other hand, there are counter-examples like my supper at Tesuque — or salty, near-petrified "salmon jerky." Or the nasty concoction of pulverized meat, rendered fat and dried berries called "pemmican." These are just a few of the many other native foods that simply don't make it in my book. I don't feel virtuous about disliking them. Nor, however, do I feel there is something there I'm just not getting. Some cultures have a perverse nostalgia for the inedible — for example, the British fondness for mushy peas. Bad food knows no ethnicity.

The fact is, despite the resourcefulness of Native Americans, aboriginal food is about subsistence, not fine dining, and liberal feel-good reconstructions, like those in the cookbook Spirit of the Harvest: North American Indian Cooking are just blowing smoke, inventing a gourmet cuisine that never was. Yes, primeval North America was a wonderful source of foods. No, the Indians were not great cooks. Nor were the colonists. A national cuisine wants not decades but centuries.

This is an authentic example of aboriginal American cooking, one not dependent on obscure ingredients or labor-intensive preparation. A form of journey bread, high in protein and fat, these cakes could be crumbled and added to boiled or roasted winter squash, or used to flavor soup.

Grind everything together. The mix will be rich and oily. Form into flat cakes, about 2 tablespoons each. The Zuni wrapped them in leaves and baked them in ashes, which would add a smoky flavor; but you can wrap each cake in aluminum foil and bake in a moderate oven for 35 minutes. Unwrap foil packs and let cool.¬†

Adapted from American Indian Food and Lore, by Carolyn Niethammer (1974)