Ne! The Soul of Marta Kubišová 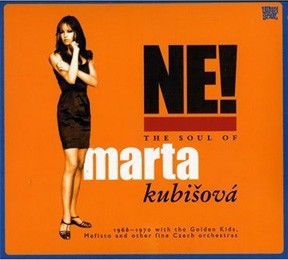 Maverick Czechoslovakian singing legend Marta Kubišová, whose peak in popularity came in the 1960s, should be an international household name -- on a similar level as Serge Gainsbourg or Asha Bhosle. However in August 1968, when Soviet-led troops and tanks rolled into Czechoslovakia, it ended all liberal reforms that had been implemented from the beginning of the year (better known as "Prague Spring," illuminated in Milan Kundera's The Unbearable Lightness of Being). Kubišová's blossoming career was suddenly terminated.

At the time, Kubišová's solo record, Songy a Balady, had just been released. She was also was part of a Czech "super-group," The Golden Kids, with popular solo vocalists Helena Vondrácková and Václav Neckár, who'd released two albums, Micro-Magic-Circus and Golden Kids 1). Partially because of her insistence on recording protest songs, Kubišová's entire catalogue, including over 200 singles, was confiscated and destroyed. Her contract with the German Polydor label was broken. She was banned from recording or performing, including television and film appearances.

Fortunately, the esoteric reissue label Vampisoul has reissued this excellent compilation of Kubisová's work from 1966-1970, in many cases making songs available to a public outside of Czechoslovakia for the first time. Compiler Lukás Machata (DJ Lou Kash) has cherry-picked over 20 killer cuts, featuring Kubišová's "rougher" side, in comparison to her more pop-oriented "Vegas"-arranged releases. Using a young, talented crew of studio musicians eager to push the envelope, Kubisová allowed her more boisterous, belting, soulful vocal delivery to sail through (she openly admired Aretha Franklin, who she met in Paris in the ’60s). From the funky backbeat of the opening cut, "Tak dej se k nám a projdem svet" (Join Us and We'll Travel the World), accompanied by fuzzed-out distorted guitars and a dense organ, the arrangement is innovative, blending funk and psychedelic influences of the time. To the present-day listener, the sound is still fresh; it's what many of today's "retro" funk outfits strive for. The psych-out "Svlíkám lásku" with its eccentric arrangement still retains a cutting edge. In an unusual parallel, this unique blend of Czech rock, folk, funk and soul bears a resemblance to the ’60s Brazil Tropicália movement, which also fused international influences with its own folk traditions, while addressing progressive political issues.

While known Czech artists, such as filmmaker Milos Forman and writer Milan Kundera, were fortunate to find passage out of the country, Kubišová was caught at the border attempting to emigrate. Instead of leaving she continued her participation in reform activism, in particular with Charter 77 along with her friend, the playwright and future Czech president Václav Havel. Ne! The Soul of Marta Kubišová sheds an important light on an essential segment of suppressed popular music history, while highlighting Kubišová's most interesting work, finally giving her long-overdue recognition.