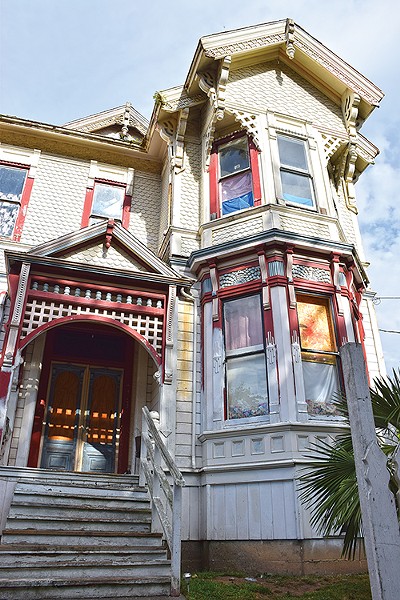 File One of the G Street residences at the center of a successful neighborhood lawsuit.

Residents along a stretch of G Street say they had one main goal in mind when they grouped together to take Eureka's most notorious landlords to court: They wanted their neighborhood back.

Conditions at two buildings owned by Floyd and Betty Squires on the street had continued to deteriorate, becoming magnets for drug activity and police calls, neighbors say. They saw an uptick in crime and, at times, felt unsafe walking out their doors.

The last straw came in the form of a December shooting at one of the residences that served as a rooming house. Shortly afterward, neighbors filed a series of small claims cases that — after being pared down — left 20 to be heard in court earlier this year.

The effort paid off last week with news arriving in their mailboxes that Superior Court Judge Timothy Cissna had awarded them varying amounts in damages — ranging from around $1,500 to $5,000 — after finding the Squireses failed to properly manage the two side-by-side buildings.

The Squireses, who are already embroiled in a six-year lawsuit with the city of Eureka over conditions at 26 of their rental properties — including the pair on G Street— did not return a phone call seeking comment.

Cissna found that "substantial, credible evidence" was presented during the three-week-long case to show the residences at 1625 and 1635 G St. were "nuisances" for a range of reasons, including drug sales, excessive garbage, dilapidated exteriors, bizarre behavior, fighting, fire hazards and shootings.

During the trial, neighbors took the stand to describe those conditions, along with Eureka Police Chief Andrew Mills and other city officials. At times they were questioned by Floyd Squires, who represented himself and his wife Betty in the case.

"Defendants submitted testimony and evidence that they have put significant effort into maintaining the properties and controlling the numerous issues with the properties," Cissna wrote in one of the rulings, which all contained the same basic language. "I find that these efforts were inadequate and/or short-lived."

The judge cited as an example how both residences were cleared of building code violations in August of 2016 but by January — just five months later — city inspectors had red-tagged the 1635 G St. after finding 200 new code violations.

"Based on the totality of the evidence ... I find that the properties at 1625/1635 were negligently operated, managed and maintained by the defendants and constituted a nuisance," Cissna wrote.

Meanwhile, the city's lawsuit — which was filed against the Squireses in 2011 —continues its slow march through the legal process.

While 26 of the couple's properties are currently under what is known as a receivership, with a third party monitoring repairs, the city has repeatedly asked the court to take further actions, citing continual delays and backslides in the conditions at certain buildings, including 1635 G St., which was condemned in January.

The latest attempt came in February when the city asked Judge Dale Reinholtsen to "take swift action" to remove the current receiver — former county Planning Commissioner Jeff Smith — or require him to "manage and repair the properties in a reasonable and expeditious manner."

Normally, a receiver is given full control over properties — including the ability to collect rent and take out property liens to pay for repairs. Under a sort of hybrid system allowed by Reinholtsen, Smith inspects properties and sets repair plans, but the Squireses retain the financial reins and oversee the process.

That, the city argued for a third time to Reinholtsen, is just not working.

"This has been a long time coming," said the city's outside attorney Krista MacNevin Jee, whose firm specializes in receiverships, adding that the couple didn't even board up 1635 G St. properly and the city had to come finish the job.

At some point, Jee told Reinholtsen, someone is going to be injured.

"It needs to come to a resolution," she said.

Attorney Carlton Floyd, who represented the Squireses at the February hearing, told Reinholtsen that his client has "felt for a long time now that the city is being unreasonable."

"No matter what he does, the city is never happy with it," the attorney said.

Floyd told the judge that Smith was trying to take care of the G Street situation when the city "intervened."

The packed courtroom for the February hearing included local residents, Mills, Eureka Councilmember Kim Bergel and District Attorney Maggie Fleming, who told Reinholtsen that she sent an inspector to G Street in response to a series of complaints.

Fleming said the issues were "very significant" with a "very negative impact on the vulnerable members of our community."

The Squireses are known for renting to individuals with poor credit histories, few resources and scant options in a community plagued with an affordable housing shortage.

Smith, meanwhile, told the judge he found the G Street situation to be a "case of extreme vandalism" and that he didn't "think it was representative of what's going on at the other properties."

Little about the dichotomy in views presented at the hearing was resolved with Reinholtsen's May 4 interim ruling, in which the judge acknowledged the city's "frustration that repairs have not been completed timely."

He also noted that a "great deal of the discussion at the hearing on the motion" centered around 1635 G St., which had been previously been signed off on by the city.

"To the extent petitioners seek expansion of the role of the receiver, further discussion is required," Reinholtsen wrote.

That interim ruling was followed up with a May 30 status update that listed 22 of the properties as completed — while Reinholtsen cited the new issues at 1635 G St. — and a report on repair plans for the remaining four.

In closing, Reinholtsen told attorneys that another status conference will be scheduled after another supplemental report is filed.

Back on G Street, neighbors said the situation seems to have gotten better.

Ron Kuhnel, who was allotted $4,500 of the maximum $10,000 allowed in small claims cases, said it was never about the money.

"What we hope will happen is he will manage the properties and the problem will go away. That's a lot to hope for," he says. "That change of behavior is out of our power. It's up to the Squireses. Otherwise, he might get sued again."

This is not the first time a group of residents has successfully taken the Squireses to court.

Back in 2014, a judge collectively awarded neighbors of the couple's 833 H St. property more than $100,000 for emotional distress and economic damages, which was eventually settled with Squires' insurance company Lloyds of London.

Kuhnel says things have quieted down at the Squireses' G Street properties in recent months, a trend he hopes will continue, as do others in the neighborhood of historic homes.

"Right now, frankly, it seems to be doing very well at this moment ... and we are very thankful for that," he says.

Lori Regalo, who has lived on the street for 20 years, agreed.

She emphasized that the case was never about the people living in the residences, some of whom she says felt powerless to stop what was happening, but holding the Squireses responsible.

Regalo, who was awarded $3,000, says the trial was grueling but there was also a silver lining: The whole process brought the neighborhood closer together.

"I'm proud of us all," she said. "I hope other neighborhoods who have this same sort of problem look at this and say, 'Maybe we should do that.'"