Under the hype, Avengers find their humanity 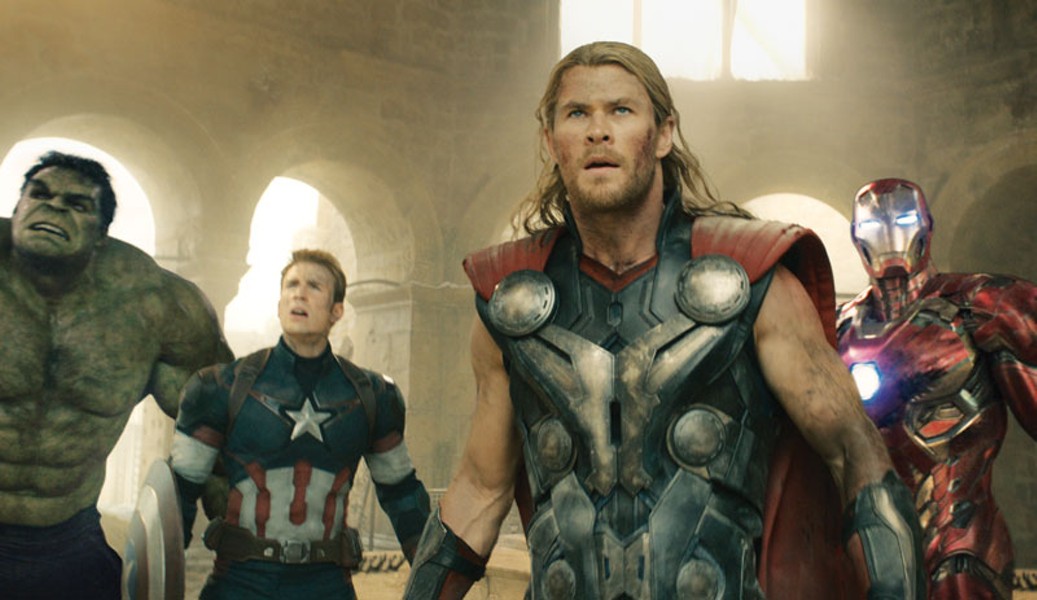 Just how many Olsens are there?

AVENGERS: AGE OF ULTRON. Joss Whedon seems to be in an unenviable position. After the writer/director reportedly fought tooth and nail to retain creative control of Ultron, now he has to contend with the dull roar of Internet chatter, if he cares to listen. There are a few camps: The apologists have cast about and blamed the movie's "weak" opening weekend at the box office ("only" some $190 million dollars domestically, and $400 million internationally) on its debut against the overhyped Mayweather-Pacquiao bout and the Kentucky Derby — a tenuous argument. And who cares? Don't fret, everybody, Disney/Marvel will still make billions, even if this sequel to a comic book movie didn't have as strong an opening as the first one.

The deeper-geek faction is quick to complain that nerd-messiah Whedon didn't magically turn the Avengers into his own true vision, a Firefly spinoff or something. As if Whedon himself is to blame for the Disney/Marvel machine's insistence on a sequel that is, to some extent, more of the same. And isn't that what the avalanche of lucre and accolades accrued by the first installment would indicate? That the formula works and more of the same would be just fine, thank you?

Whedon will be fine, of course. Reports indicate he intends to back away from his involvement with the MCU — Marvel Cinematic Universe, hashtag winking emoji — to focus on his own projects. So that should calm some of the screeching. It doesn't hurt that he has an unimaginable Matterhorn of cash to slide down, Scrooge McDuck style, if he's feeling lowly.

This is all background, but still part of the conversation. The culture is so saturated with rumors and build-up and blowback that the art at the center of it all — the content, if you insist — has become almost secondary to everybody's feelings about it. I'm not necessarily saying this is right or wrong — it's wrong — but it is most certainly a thing, and one that needs noting. What if we all commented as freely on bank buyouts or insurance company CEO salaries? Just saying.

Back to the matter at hand: Age of Ultron is, as the lay criticism would indicate, a compromised work. Big and cacophonous, sometimes to the point of being inscrutable, it is also characterized by a stellar cast, Whedon's trademark quippiness and writing underscored by serious meditations on human nature. It may not be my personal bag (none of these Marvel movies really are), but it gets as close as possible.

Ultron opens with perhaps its most exciting action sequence, with the Avengers going through a snowy Eastern European forest to raid a Hydra compound controlled by the obviously-nefarious-because-monocled Baron Wolfgang Von Strucker (Thomas Kretschmann). The Baron is in possession of Loki's scepter, and has been using it to perform human enhancements. Captain America (Chris Evans) and Iron Man/Tony Stark (Robert Downey Jr.) spearhead the attack, because Cap don't truck with eugenics experiments and Stark wants to clap eyes on Hydra's tech. The Avengers succeed in their task, of course, but not without some casualties. Hawkeye (Jeremy Renner) takes a round to the midsection, while Iron Man and Captain America encounter Wanda (Elizabeth Olsen) and Pietro (Aaron Taylor-Johnson) Maximoff, twins who volunteered for the Baron's meta-genetic tampering. She wields telekinesis and mind-manipulation; he is insanely fast. As the gang beats heels back to base, Stark wrestles with an apocalyptic vision of the future revealed by the sister Maximoff's manipulations. He enlists Bruce Banner/the Incredible Hulk (Mark Ruffalo), already in a crisis of conscience about his rage-based identity, to help him decipher the scepter and get at whatever lies within. Which, of course, turns out to be a tremendously powerful new form of intelligence that Stark intends to use in the reinvigoration of his Ultron program for global defense. Thing is, Ultron is smarter and more emotional than anyone could have predicted, and he sees annihilation of the human plague as the only solution to the Earth's problems. So that's an issue. Also, Ultron enlists the Maximoffs, whose parents were killed by Stark munitions, in his cause. So while the hyper-intelligent rage-bot builds an army, Wanda runs around cultivating self-doubt and paranoid fantasy in the minds of our heroes. All of which eventually leads to climactic showdown of gigantic proportions. There is a discussion to be had about the continuing cinematic conversation regarding artificial intelligence.

There are an awful lot of elements to this plot, and the overarching story suffers a little for it. But each element is strong enough that there isn't much reason to complain. Whedon takes great pains to give each of the Avengers a moment when his or her humanity, warts and all, is prominently displayed. He focuses on the psychological scars they all bear and uses Ultron as a potent symbol for our/their collective remorse and hubris. And he carefully builds the relationship between Natasha Romanoff/Black Widow (Scarlett Johansson) and Banner, allowing Romanoff to come into her own as a full-blooded person and a crucial part of the team. This is one of Whedon's special strengths, and one that is in woefully short supply in Hollywood. He writes strong, flawed, dynamic female characters better than just about anybody. In fact, Natasha Romanoff and Wanda Maximoff could rightly be viewed as the most grounded, most human, maybe most important characters in this story. PG13. 141m.

THE D TRAIN. Jack Black plays a man who gets more than he bargained for trying to save his high school reunion by cajoling a famous alumnus into attending. With James Marsden. R. 97m.

HOT PURSUIT. Reese Witherspoon and Sofia Vergara in a buddy comedy about a straight-laced cop on the run with a sassy mob widow. Guess which one is the cop. PG13. 87m.

SEYMOUR: AN INTRODUCTION. Ethan Hawke directs this documentary about a pianist and his devotion to his art. PG. 84m.

THE AGE OF ADALINE. Blake Lively as an eternally young woman in this pleasant date-night confection with old-Hollywood style, if not substance. PG13. 113m.

EX MACHINA. A compelling, original and exceptionally well-acted AI thriller about a robot, its creator and a man who doesn't know which of them to trust. R. 108m.

GET HARD. Will Ferrell and Kevin Hart respectively play a 1-percenter and a faux tough guy prepping for prison in a comedy that isn't funny enough. R. 100m.

THE LONGEST RIDE. The latest Nicholas Sparks adaptation has young lovers reading old love letters, this time with a rodeo backdrop. Predictable and dull, it hits the dirt like a fallen rider but nobody cares if it gets up. PG13. 128m.

MONKEY KINGDOM. A Disney documentary about a monkey and her baby in a South Asian jungle. Narrated by Tina Fey. G. 81m.

UNFRIENDED. More "found footage," this time from a laptop chronicling a cyberhaunting with messages from ... a dead girl. R. 82m.

THE WATER DIVINER. Russell Crowe stars as a father on the hunt for his missing sons in Turkey. R. 111m.

WHILE WE'RE YOUNG. Noah Baumbach's writing and an excellent cast create real-life ambiguity in a story about married 40-somethings trying to keep their cool. With Ben Stiller and Naomi Watts. R. 97m.

Small Fish in a Small Pond

In the Lab
Top Stories