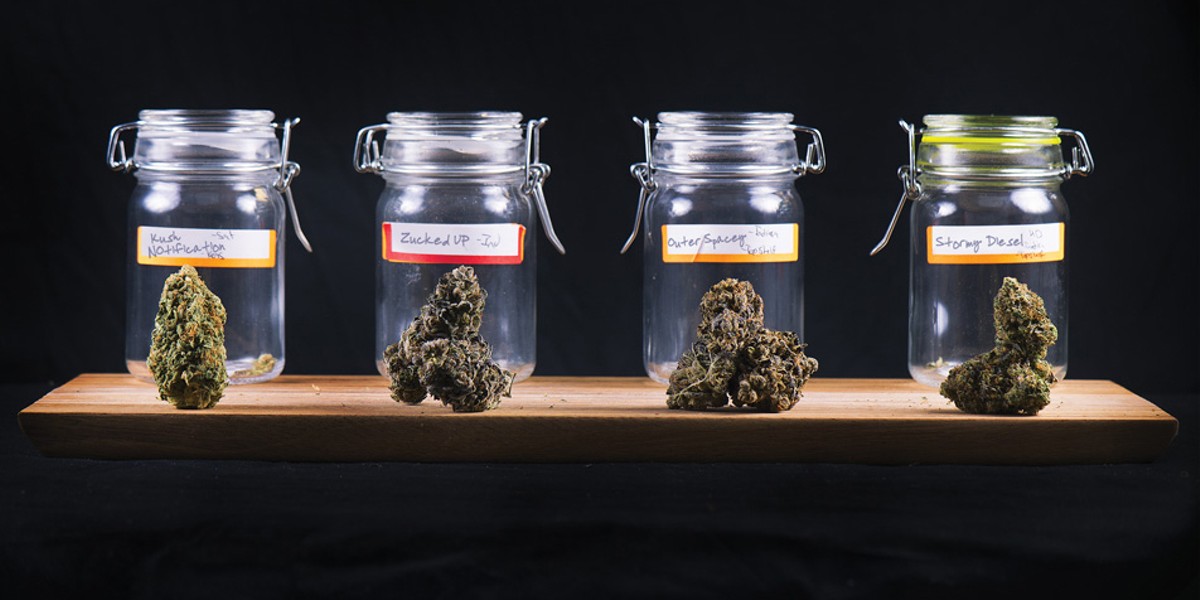 Jefferson Beauregard Express. With a mellow cornbread, Brill Cream and Klansman hood scent, this Indica offspring of Reefer Madness and Jim Crow rolls up on you like a black SUV full of federal agents and shuts down your anxiety about Jeff Sessions overriding California's cannabis legalization and seizing the very product that you were counting on to get you through this presidency.

AI. The frying motherboard smell of this one lingers. But its full knock-out effects are strong enough to reboot your psyche when your Alexa responds to your request with a chilling laugh and you realize the Singularity is upon us and the robot overlords that we ourselves have created will not be benevolent. Shh — they're coming.

Golden Parachute. The Cohiba and freshly mown grass flavors are the result of blending Shady Acres and Gig Economy for a full-body numbing that's as close to cryogenic freezing as a dispensary offers. Keep a pre-rolled joint on hand in case someone says "retirement" like it's a thing everyone can do and you're not going to work until you die hunched over the wheel on the way to pick up an Uber fare.

Miami Vice. This heavy Indica strain smells like Don Johnson's white slip-on shoes and cuts like a cigarette boat through all your anxieties about Florida — anything about Florida. Like the fact that it's a real place with alligators in its amusement parks and a state senate that, in the wake of the Stoneman Douglas massacre, voted to arm teachers instead of banning assault rifles. Jesus Christ, Florida.

Kush Notification. A blast of this skunky stunner will dull that dread you feel the moment you wake up and look at headlines on your phone to see what fresh hell awaits. For evening, a fully packed bowl of this Anderson Kush/Don Lemondrop hybrid will help you relax your facial muscles from the rigor of silently screaming at whatever is on CNN. This strain is recommended over Jared Kush, a pale, ineffective bud that mostly leaves you mute and a little carsick.

Gore S'more. Perfect for facing inconvenient truths, the deep, full-body high from a cross of Greenpeace and Superstorm will melt your anxiety and rage over the destruction of the planet like a polar icecap. Whether it's climate change denial or the latest doomsday report that sets you off, a few rips should keep you from beating people with their own plastic water bottles.

Outer Spacey. That actor/chef/musician/journalist/comedian you've always admired turns out to be trash? We've all been there and will likely be again soon. Grape Culture and Backlash yield a sticky salve to your disappointment with a low-key, lasting buzz that eases you into lowered expectations for both people and justice. Oh, it won't let you enjoy his work again without the lingering taste of bile, but it will help tune out an insincere apology tour and steel you for his inevitable comeback.

DMZ-45. Like the potential playdate between the two worst haircuts in international politics, this strain derived from WWE and Nuclear Football packs a destabilizing wallop from which no good will come. But given the nuclear-powered tough-talking Kim Jong Un and Donald Trump have been engaging in, it might not matter. Go ahead and get crazy high because, holy shit, these two have the launch codes.

Spicoli. This Sativa on steroids pushes down your introversion enough to trick you into thinking your high school reunion will be fun and not an awkward reminder that the broad field of choices you once had is narrowing by the moment. Its high-octane buzz also makes it easier to talk to former classmates pretending they don't remember making out with you that one time.

OG Cupid. This Indica/Sativa hybrid is a match made in heaven between Swipe Anyway and Glass Slipper. Specifically engineered for the stresses of dating in small, rural communities, it produces breathless optimism and squashes down the feeling that you and at least three people you know have already dated this person and if it goes south, you are 100 percent guaranteed to run into them over and over. Those over 40 might want to look at concentrates. LGBTQ folks should proceed directly to shatter.

Doogie Wowser. Scrolling through WebMD to figure out if that spot on your foot is beach tar or flesh-eating bacteria? Doogie Wowser will float you out of that self-diagnosis hole with the calming, body-ache-soothing powers of parent plants Munchausen and Dr. Quinn Medicine Woman. Try it in tea and drift away to a place where all your moles are symmetrical.

Zucked Up. When the ancients first discovered the healing, psychoactive and spiritual powers of the plant, they probably didn't foresee a future in which one might accidentally go live on Facebook from one's bathtub. Adjust your algorithm and bliss out with an Indica heavy enough to drown your public humiliation. Will you ever be able to show your face again? Moot question. You're not going anywhere for some time.

Reply All. Need more kick than coffee to get you through yet another meeting that could have been an email? Luckily, Sour Point and Corporate Crack have merged to yield an invigorating Sativa with notes of cheese Danish and copier toner that will leave you hyper alert and euphoric enough to nod thoughtfully, even when Dan is talking.

Red Pill Chill. Rolling your eyes at men's rights activists freaking out in the comments takes its toll — relax your ocular muscles and purge the toxic masculinity with a potent mix of Xena Warrior Blueberry and Themyscira Gold. They join forces for a roaring buzz that stays strong even when the masculinity gets fragile.

Insta Damn. Seeing everyone including your ex brunching, frolicking on beaches and flaunting thigh gaps can scrape away at your self esteem. You could combat the soul-crushing envy by logging off and being present in your own life, but be serious. The pairing of vintage classic Brangelina and #Valencia emits a stinky but expensive cheese odor and blots out all the saturated selfies, replacing them with a dreamy, transportive feeling similar to reading a book.

Nazi Punch. An energizing Sativa cocktail of Pussy Hat and Flash Bang to focus you for the next protest and help you come up with yet another witty/insightful sign faster than you can say #Resist. Take a deep toke and replenish reserves depleted by marches and phone calls against Muslim bans, the wall, the gutting of healthcare, police brutality and the return of actual Nazis. Pack it tight for the struggle.

Grain Wreck. A heretofore untried mix of Vegan Death Star and actual quinoa produces a gentle, heady high to tamp down the panicky suspicion that giving up gluten might not be doing anything for you and everyone else is happily stuffing themselves with bread and pasta and they're fine but if you're wrong and you go back on bread — glorious, crusty bread — you'll have to detox all over again and is that cake? Who the hell brought cake?

Pineapple Abyss. This shit is just strong. Because nothing means anything and we're all going to die.

Jennifer Fumiko Cahill is the arts and features editor at the Journal. Reach her at 442-1400, extension 320, or Jennifer@northcoastjournal.com. Follow her on Twitter @JFumikoCahill.