Short-sea shipping's on the horizon, and Stephen Pepper wants to tug it in 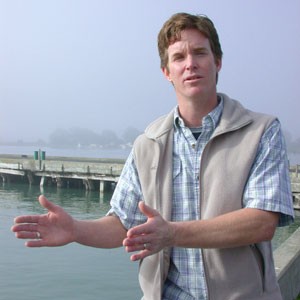 As visions of cruise ships bearing moneybags tourists danced through people's heads at last Friday's harbor commission meeting -- delighting a few, perhaps, but apparently provoking headaches in most -- one young man sat quietly in the back row of the audience with a different vision occupying his brain.

The Humboldt Bay Harbor, Recreation and Conservation District Commission was discussing the final business plan for developing the Redwood Marine Terminal, that currently dilapidated expanse on the bay side of the Samoa Peninsula whose fate has been handed to the harbor district. The plan -- by consultants TranSystems -- would have the district seek $40 million to build a multipurpose berth that could handle everything from commercial cargo shipping to the aforesaid cruisers, plus various non-cargo endeavors. And it would expand over time. The commissioners' job this night was to vote on whether to proceed with an environmental review of the first phase.

Several scoffed at the cruise ship dream, and Eureka's questionable allure to cruisegoers en route to more fancy destinations. Others called for proof that enough business exists to support large-scale commercial shipping. And then came a ray of light: Commissioner Dennis Hunter noted that one of the suggested uses of the multipurpose berth was short-sea shipping -- the movement of goods short distances across water, as opposed to transiting the ocean.

"This probably excited me more than anything I read in this plan," Hunter said.

If one knew anything about the young man sitting in the back row -- Stephen Pepper -- one might have imagined a sharper glint in his eye upon Hunter's declaration.

Pepper didn't talk at the meeting. But, in an interview earlier that day, he said he hoped to go before the commission soon with his own proposal for economic revival on the bay. Yes, short-sea shipping. And not as a medium- to long-term option, as TranSystems would have it, but as something that could happen right now.

Pepper, a tall, blue-eyed, down-to-earth-seeming guy, is a Humboldt State grad. He moved up from Southern California in 1995 to get his degree in oceanography. "I fell in love with the area, fell in love with my wife, got a dog and a house and kids," he said.

He's worked on boats since he was a kid -- got his tugboat captain's license in 1999 and worked for years for Brusco Tug & Barge out of Eureka and on tugboats out of San Francisco. Over the years, he said, he's pondered the possibilities of the bay. And, watching the downturn in the economy, he decided short-sea shipping was something that could thrive in good times and in bad.

He took a break from tugboating and founded Humboldt Maritime Logistics, LLC. Now, he and a business partner have been shopping around their plan to develop a container-on-barge, consorted freight service based in Humboldt that would serve major and minor markets along the West Coast. It would use a 400-foot barge, contracted through a third party, which would ply up and down the coast in a loop, docking at five ports -- Long View, Wash., Coos Bay, Humboldt Bay, Oakland and Long Beach -- to pick up and drop off an assortment of containerized goods. Perhaps 5,000 or more containers of different varieties would be in circulation between the ports, able to hold everything from wood chips and oil to lumber and pipes to bagged soil and bottled water and refrigerated goods. Retailers, wholesalers, manufacturers -- just about anyone could use it, Pepper said, as long as they didn't need too-speedy delivery. Cut flowers, for example, might not be suitable, he said.

The barge would call into Humboldt's port once a week -- somewhat like a Greyhound bus on its scheduled route. Once in port, a crane would lift the containers off the barge onto the dock, or vice versa -- work that would be done by local longshoremen stevedores. The off-loaded containers would be staged in the HML yard, and from there distributed by short-haul trucks. The same thing would happen at the other ports, with some variation at each.

"The service is designed to offload 100 containers and load on 100 containers per port call," said Pepper. "It's relatively small-scale. We see it as something that's expandable, but initially it's very size appropriate for the city of Eureka."

The best part, Pepper said, is that the major markets -- which would be moving more goods on the barge -- would shoulder the costs for service to the smaller markets, like Humboldt.

And container-on-barge hauling, he said, is cheaper, anyway, than long-haul trucking -- the way most goods move in and out of Humboldt.

"We're estimating an average of a 20 percent reduction in freight costs for the shipper," said Pepper.

According to Pepper's calculations, a barge in their service would be able to move one ton of freight 390 miles with one gallon of fuel. A long-haul truck, on the other hand, moves a ton of freight 111 miles per gallon. "This model projects a savings of 160,000 gallons of fuel a month," he said.

So, that also makes it greener -- that and the fact that the barges wouldn't unwittingly transport invasive species, he said, the way ships can. And it's the sort of redundant transportation needed in isolated Humboldt, Pepper said, which relies on the I-5 and 101 corridors for most of its commodities. That's also why short-sea shipping's popping up in more discussions these days in transportation circles. Both the federal and state government are looking at ways to incorporate short-sea shipping into transportation programs as a way to alleviate traffic congestion on highways and reduce air pollution; the East Coast already has some funded projects underway.

Right now, the U.S. Maritime Administration is working to designate marine highway corridors. It's soliciting suggestions for these corridors through Feb. 6, 2009. Once the corridors are decided, the administration will be looking for projects. Pepper hopes he and the rest of the community can impress the feds, and thereby attract funds.

Other than that, he's already lined up a dock: Pacific Affiliates' Schneider Dock, south of Old Town. Now all he needs is a crane -- they cost about $4 million -- and for the network of shippers and support services to fall into place. And money: Pepper figures it would cost, in addition to getting the crane, $1.25 million to reach a sustainable service.

Dave Schneider, who owns the Schneider Dock, said this week he likes any plan that uses his dock -- a concrete, unlimited-load capacity dock he built eight years ago when he listened to the people saying, "Build it and the business will come."

"Well, it didn't come," Schneider said. "I spent $10 million on that crazy dock, and it's 99 percent unused. What's neat about [Pepper's] plan is all of the infrastructure exists. It's just a matter of making it work."

Leroy Zerlang, of Brusco Tug & Barge, said he thinks short-sea shipping could be happening on the West Coast within three to five years. He knows of at least four companies who are trying to start up a similar plan to Pepper's, although Pepper is the only one he knows of trying to do it from Humboldt.

"This is going to happen," Zerlang said. "Short-sea shipping is probably the most viable thing on the bay I've heard of in years. The rest is nonsense."

The Redwood Marine Terminal, for instance: "I think the local government here wants to build the Eiffel Tower, when they should be building a small statue," Zerlang said. "And I would hope that the harbor district wouldn't stop private enterprise from going forward and try to make everyone go to their Redwood Dock."

Last Friday, the commission voted 3-2 to move ahead with the Redwood Marine Terminal plan's environmental review, which they emphasized did not mean they had approved the actual plan. But on Monday, Commissioner Hunter -- who voted for moving forward and was arguably the swing vote -- said he would consider helping other projects, like Pepper's, get funding. Even if Pepper wanted to use the Schneider Dock.

"We're not competing with business," Hunter said. "We would do what we could to help him. I'm a firm believer in keeping all options open. And I think short-sea shipping is going to be transportation's new wave."