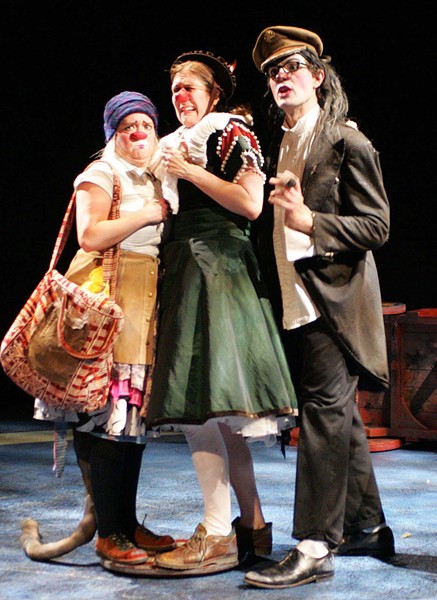 You never know exactly what you'll find when you venture to a Dell'Arte show: It could be melodramatic, could be slapstick, possibly gory grand guignol, perhaps some impassioned dance routine or a twisted musical comedy. There's usually some warning, so you can be somewhat prepared.

But this weekend as the Dell'Arte Company presents something it's calling a "New Works Cabaret," it asks rhetorically, "What will it be?" and answers, "We don't know yet." Aside from describing it as "all new work" and listing the participants, we're left to guess what might happen on stage.

Ah, the promise of something "new." At Dell'Arte that could mean a first glimpse at some work in progress, or it might be some brilliant piece (or a dud) that will never be repeated.

The review of short pieces will include new work from the Stephanie Thompson, Lauren Wilson and Joe Krienke, the clownish trio behind last year's anti-war comedy Three Trees, among other things. (See photo.)

Dell'Arte founder and Artistic Director Joan Schirle and the inimitable Zuzka Sabata from The Brendas, etc. are concocting something with a Bulgarian theme. (Incidentally, both were featured in the marvelous marijuana musical Mary Jane, which is returning this summer.)

The amazing dance teacher Laura Munoz is working on a movement piece, sure to be moving. Barney Baggett has a dance piece in store too. Nicholette Routhier will invoke "the mask," a recurring theme at the Blue Lake school. And Molly Armstrong, Matt Chapman and Joe Krienke debut their new band, The Big Forgive, in some genre or genres as yet undeclared.

The overall promise: "All new work, all never seen before." That's right, no reruns -- and with Dell'Arte, it's certain something will surprise you.