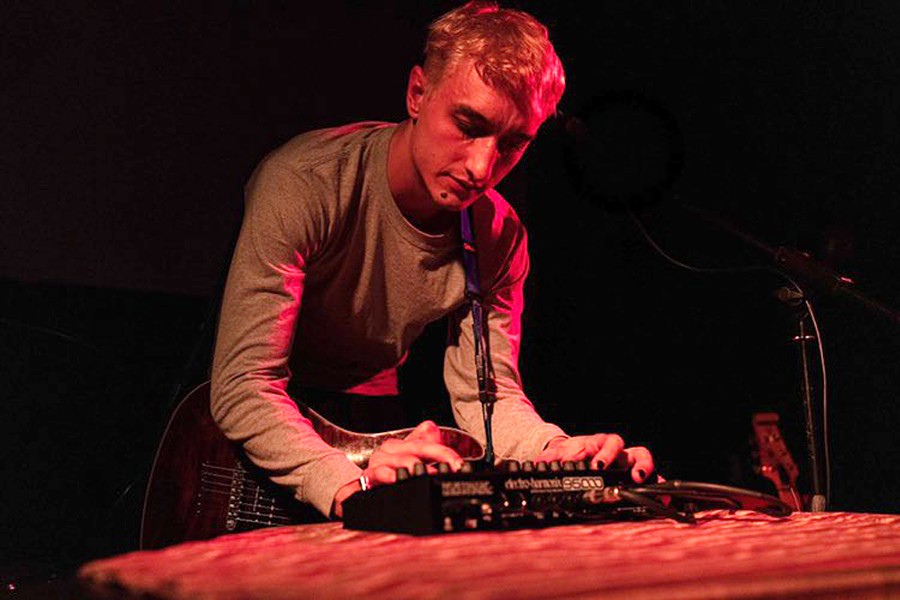 Photo by Zach Lathouris, courtesy of the artists LK plays the Siren's Song Tavern on Sunday, Sept. 3 at 6 p.m.

It's Virgo season, which, for an astrology heretic like myself, basically means "smokey summer/early fall." Last weekend was also my baby brother's b-day, so many happy returns, dear Tyler. This is a time of year when I like to take long evening drives out to nowhere, playing music loudly, with the windows open because, for some bizarre genetic twist of fate, I don't often feel the cold. Last night my musical director was Warren Zevon but it's a rotating cast. The point of the adventure is to always try and feel something, the elusive grasp at the impossible junction of desire and fulfillment. That ineffable wonder that ad executives and plastic gurus alike have been selling us for the better part of a century; unfiltered and untethered from commercial concerns. Is there anything more essential to the summer, particularly the late summertime, than the dark and sacred night, when the brevity of the star-time is married to a warm promise of the fading memory of the departed day? I don't know but I've sure been looking for it a lot lately.

When one thinks of reggae music, the town of Birmingham, England, isn't the first place that comes to mind. However, that city is indeed on the map in the world of off-beat rhythms largely due to the efforts of a massively influential and popular act Steel Pulse, whose nearly five-decade career has seen a consistent appreciation with reggae fans around the world. Those of you in the 707 can get in on the fun tonight at Arcata Theatre Lounge at 7 p.m., when the legends come to jam out in Arcata again ($44, $39 advance). Santa Cruz's Pacific Roots opens.

The Eureka Friday Night Market has been an up-and-coming success story, and my friends in the North Coast Grower's Association tell me the crowds and vendors have been bustling and cheerfully receptive toward the live music. That augurs well for Young & Lovely, the Penner family's torch song jazz project. You can catch their free set beginning at 5:30 p.m. at the gazebo and, if you bring your bicycle, you can join in on a critical mass ride a half hour later. Seems like a good time.

Ahead of next week's great big show (that I will be writing about at the relevant time) Canary and the Vamp are playing a free gig at Siren's Song tonight at 8 p.m. This group is always good for a lot of songs in long, well-played sets. So make sure to settle into a cozy spot, and think about bringing some cash to tip the player and buy "the fiddler a dram."

Siren's Song is putting on a diverse show tonight at 6 p.m. JD Garza is a singer/songwriter from the central valley who is now based in Arcata, and who peddles in a soft and sad sound. Then comes Logan, aka LK, who is associated with Open Head Records, specifically the band BIOMASS, and who will be doing a solo set of guitar, voice and loops. Following Logan comes a new local alternative act called Mellow Meltdown, which hasn't put anything down on tape yet, but I am told sounds like something next to funk rock. And headlining the evening is a post-hardcore emo act from Sacramento called Anxious Arms, so between all four acts, a fairly wide net is being cast genre-wise ($6).

It's the last hurrah of summer, when the upper class puts away its white jackets until next May, and the rest of us working class schmoes get an extra day off until we permanently throw off the yokes of capital-enforced hierarchy via a worldwide ... well, you get the idea. Locally, this means that the beloved I Block Party in Arcata is back in full effect, with all proceeds raised by vendors going to Arcata's sister city of Camoapa, Nicaragua. Beginning at high noon, you can come to the block between 10th and 11th streets and enjoy the musical stylings of The Latin Peppers, Absynth Quartet and the Jim Lahman Band.

"Some folks' lives roll easy as a breeze,

Drifting through a summer night,

Heading for a sunny day.

But most folks' lives, oh, they stumble.

Through no fault of their own.

Most folks never catch their stars."

Something to think about from Paul Simon's mid-1970s songbook. And plenty of time to think about it, as tonight's gigs are going to be spent at home, with a playlist created by you or the radio. Perhaps you can try streaming some local DJ talent from Humboldt Hot Air at www.humboldthotair.org. Just a suggestion.

Can you imagine anything more bizarre than trying to get a roomful of strangers to laugh? And not in the nervous, dorky opening joke kind of way that many public speakers employ to soften up a room before launching into a Powerpoint demonstration or keynoting a conference. I'm talking about sustained laughter, with connected themes, timing and wordplay all colluding to turn five minutes into the longest verbal tightwire act that you have ever witnessed or personally attempted. My hat goes off to anyone who has the chutzpah to try an open mic. So for those about to bomb, I salute you. There are two such public open mics this evening within walking distance of each other in fair Eureka. Has anyone ever called it "fair Eureka" before? Somehow it seems less terrible than those tight-lipped and defensive "I like Eureka." bumper stickers, with the period at the end really hammering in the humorlessness of the sentiment. Anyway, 8 p.m. at Siren's Song and 9 p.m. at Savage Henry's Comedy Club. Go with gusto, it's free.

Collin Yeo (he/him) is a loner, Dottie. A rebel. He lives in Arcata.