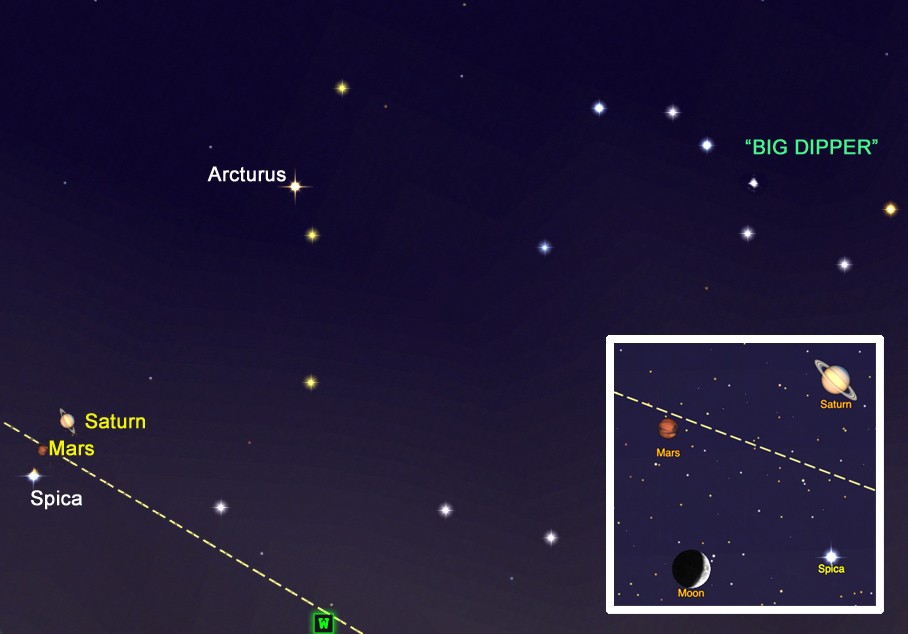 The best planetary conjunction of the year is coming up soon, with the added attraction that the bright star Spica is part of the action. Mars and Saturn will be at their closest next week, but any time between now and the next couple of weeks will make for a pretty cluster of the three bright objects, with the waxing crescent moon moving in on Aug. 21.

The planets of the solar system all orbit around the sun in approximately the same plane, within about five degrees. (Used to be, before its demotion to a "dwarf plant" in 2006, I'd have to add "other than Pluto," whose orbit is inclined at 17 degrees.) That plane translates to the "ecliptic" line on star maps, the sun's annual path through the background stars. The moon and planets move within a strip of sky extending on each side of the ecliptic. There's nothing magical about planetary conjunctions -- they happen regularly and predictably, for the simple reason that planets closer to the sun move faster in their orbits than do the ones farther out. Mars, for instance, orbiting half again as far from the sun as we do, takes about two Earth years to go around the sun; meanwhile Saturn, nine times farther away from the sun than Earth, takes nearly 30 years to make one revolution. This means that, at a little more than two-year intervals, Mars appears to overtake Saturn. It happened in late July 2010 and will happen again in late August 2014.

Mars and Saturn will be at their closest on the evening of Aug. 14. Look to the west an hour or so after sunset. Don't wait too long: the sun sets soon after 8 p.m., while the two planets set around 10:30 p.m. Binoculars will enhance their contrasting colors. Mars, magnitude 1.1, has a rusty hue due to iron in its surface dust. Brighter Saturn (magnitude 0.8), to the right of Mars on the 14th, is slightly yellow from ammonia in its thick atmosphere. The blue-white star Spica lies to the left of Mars, shining about as brightly as the planet. Spica, the 15th brightest star in the sky, is easily found even when it's not involved in a planetary conjunction. From the Big Dipper's curved handle, you can, in the words of the old sky navigation mnemonic, "Arc to Arcturus" (a bright orange star) then "Speed to Spica." Spica, "ear of corn," is the brightest star in the constellation Virgo.

A week after the conjunction, with Mars and Saturn still quite close, the moon joins them. Check the twilight western sky on the night of Aug. 21 for a rare quadruple conjunction: Mars, Saturn, Spica and the 4-day-old moon. As you gaze, consider this: moonlight (reflected sunlight) takes a little more than a second to reach your eyes; light left Mars 14 minutes ago, and Saturn an hour ago. Meanwhile you're seeing Spica, 260 light years distant, as it appeared in 1752, the year Betsy Ross was born.

Barry Evans' (barryevans9@yahoo.com) love affair with the moon is platonic, pure and passionate. He will be giving a talk in the "local authors" series at the main Eureka Library on Saturday, Aug. 25 at 1 p.m. For reservations call 269-1991 or email hlf@humboldt.org