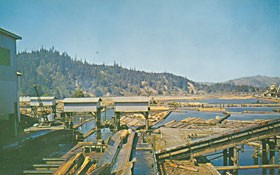 OK, I know what you’re thinking. You’re easing out of the chair. You’re putting down this paper. You’re standing up to walk out the door to see if a sharp sea breeze might slap you back awake. Hazard mitigation plan. Three hundred pages. Heck, printing the thing could jam office equipment, delay projects and create small personal disasters.

But reading the plan is worth the risk — if only because it’s a Humboldt-miscellany-lover’s paradise. Did you know that there have been 14 presidentially declared disasters here since 1964? There was the tsunami in April 1964, and then record flooding in December that same year; a drought in 1977; tornadoes in 1983; landslides in 1995; extreme fires in 1999; and, in between, more major floods and severe winter storms.

And did you know that there are at least 20 dams on the rivers that flow into Humboldt County — including the big ones on the Mad, Eel, Trinity and Klamath whose failure could endanger (if they all failed at once) nearly 5,000 people and about 2,400 houses? But while that sounds fairly major, did you know that the little old log pond in Scotia might actually be the most dangerous in the lineup? Quoth the hazards plan:

“[O]nly those found on the Klamath, Trinity, Mad, and Eel Rivers pose major threats to property or populations in Humboldt County. An arguable exception is the Scotia Log Pond, which impounds up to 210 acre-feet of water directly above 49 homes. Though the dams on the large rivers in the County hold significantly more water and would inundate far more area, the Scotia Log Pond poses the most immediate threat to life. A total failure of this dam would inundate some or all of these homes, which range from 60 feet to 400 feet from the dam. At this close proximity, inundation would most likely occur without warning.”

And there’s more stuff like that in the plan. Entertainment value aside, you can think of it as an extra-early warning system about anything catastrophic and nature-caused that could happen in the county. Short of a meteor impact. In simplest terms, you’ll know where to run if there’s time for running. And emergency officials will know where the vulnerable people are who can’t run and will need help. Pre-disaster, it gives your local officials detailed proof of need when applying for grants from the state and feds to bolster infrastructure or fix things, and sound facts to justify redirecting future development if necessary.

But the plan does not go so far as to describe the current conditions of, say, dams. It’s more of a catalog of potential disasters. And as for the earthen dam built in 1910 to contain the water that Pacific Lumber Company once used to float logs? Stop worrying. “I’ve never heard Palco or anyone express concern about dam failure,” said Pat Kaspari of the engineering firm Winzler & Kelly, which helped craft the plan.

A public workshop on the plan is scheduled for Oct. 4, 6-8 p.m., in the Bay Room of the Wharfinger Building, 1 Marina Way in Eureka. You can find the plan at www.co.humboldt.ca.us/planning . Comments are due Oct. 19.