Mike Kelly The grinding plates of a bat ray in the sand. 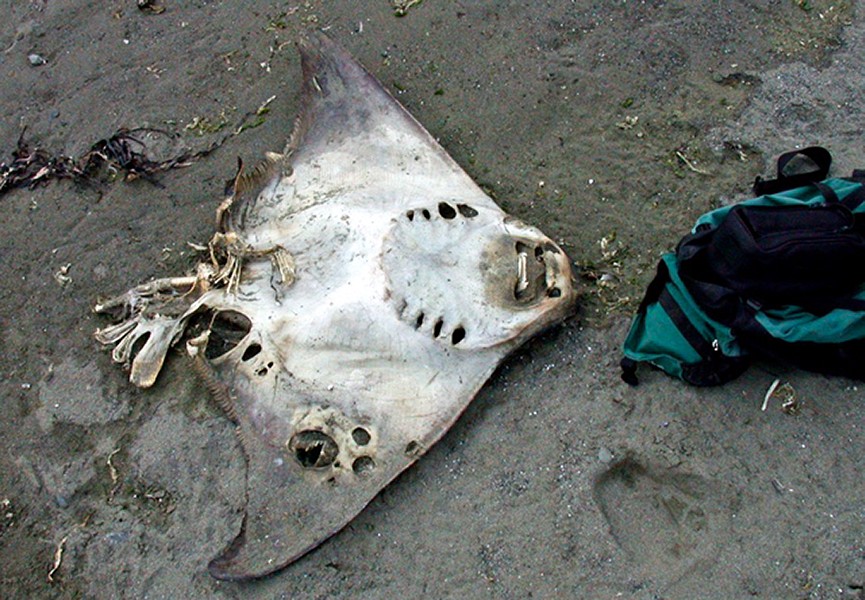 Bat rays (Myliobatis californica) live peacefully in an environment of frequent violence. So I'm sorry but there's nothing funny about bat rays. If you came here looking for cute little bat ray jokes, you might as well take this newspaper and stick it under your puppy.

As stingrays, they have a stinger. And bat rays are also ovoviviparous, which means they give birth to live young hatched from eggs inside the mamma. But, as a stingray, the female must bear pushing little stingrays out her cloaca. If you had to squeeze out five or 10 stingrays in one shot, you'd definitely want the epidural. However, a baby bat ray has a soft stinger encased in a smooth sheath. As soon as it's born, the sheath drops off and the stinger hardens.

As for human stings, a 30-second internet search convinces me that most injuries are to fisherfolk. Apparently, you must do something brutal to a bat ray, like, for example, maybe skewering it through the face with barbed metal and yanking it out of the water, to get it to sting. After all, bat rays are one of the gentle creatures that public aquariums like to put into their touch tanks for innocent children to pet and poke at. As long as your darling children don't ride, stab, gaff, drop kick, taze, bite, noogie, nunchaku, harpoon or guillotine the docile bat rays, they are supposedly safe playthings.

I can recall only finding one bat ray washed up around here. I got the jaws out of it but I did a crappy job of cleaning it. I got its intact grinding plates, though. These thick plates are made up of tile-like teeth. It's obvious that attaching these plates to some strong muscles would provide impressive crushing power.

So it's not a surprise that bat rays specialize in eating clams. They expose them on bay bottoms and nearshore areas using their wings to sort of go whump, whump, whump over the clam. The bat ray then crushes the clam and sucks out the yummy parts and ejects the broken shells. Crushed gaper/horse clam shells are common on local beaches — often with the two broken halves still joined. I can't prove it but I'm saying these shells are leftovers from large bat rays.

Bat rays are common in Humboldt Bay. The murkiness of the bay makes them difficult to see but they do come into shallow water to feed, so you might get lucky and see one from a pier or one of the new trail bridges.