No Celtic? Blame the Volcano 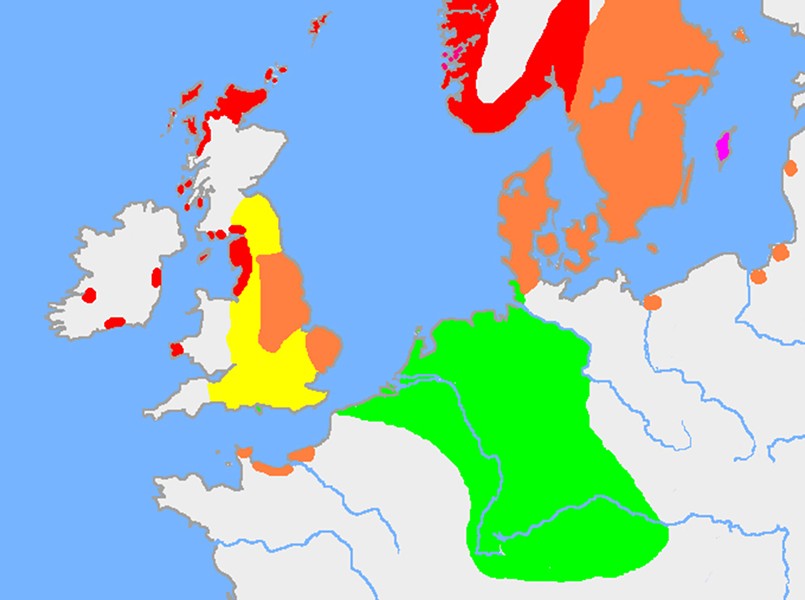 Celtic is virtually absent in the English language, despite the fact that almost everyone in what is now England spoke a branch of Celtic before Germanic speakers invaded the country following the departure of Roman legions in 410 A.D., as I discussed in "The Weirdness of English, Part 2" (March 16, 2017). The exception is our use of the auxiliary "do" ("Do you see that?" "No, I don't") and our "-ing" ending ("I'm writing," not "I write"). Of all the world's 6,000 languages, the only other two that use equivalent "do" and "-ing" constructions are Celtic Welsh, plus a near-extinct branch of Italian.

The near-total disappearance of the Celtic language in England is odd, compared to what happened in other Roman provinces on the continent, notably Gaul (France), Iberia (Spain and Portugal), Dacia (Romania) and Italy itself. There, the Germanic invaders — and, ultimately, settlers — adopted the language of the thoroughly Romanized natives. For instance, by the time they conquered England in 1066, Normans ("north-men") had traded their Scandinavian tongue (Germanic) for French (Latin).

The case of England in the fifth and sixth centuries is more akin to what happened when European imperialists encountered Native peoples in the Americas 1,000-odd years later. Germanic-speaking invaders from northern Europe — Angles and Frisians, along with Saxons and Jutes — barely assimilated with native Celtic speaking Britons (Latin being far less common than in the Romanized parts of the continent). Instead, they drove the native population westward and northward. Archeological and linguistic evidence (e.g. graves and place-names) shows that, by the early sixth century, the land was split north-south: Celtic speakers to the west, Anglo-Frisian (aka "Old English") speakers to the east. Speaking mutually incomprehensible languages, the two groups had little in common. While the native Britons maintained connections to what remained of the Roman Empire via ports in the southwest of the country, the newcomers traded with their northern European homelands.

So when the devastating bubonic plague of 541 AD reached Britain around 547 on ships from Rome, it infected and killed the Celtic speakers in the west of England to a much greater extent than the Germanic speakers in the east. Consequently, the Angles, Saxons and the rest were soon able to migrate west, unopposed, and settle the largely depopulated "wastelands" of Arthurian legends.

The volcano in the title was (probably) an Icelandic one that erupted violently in 536 A.D. ("worst year ever" according to some historians), causing a sulfuric aerosol "veil" that led to at least a decade of global cooling during which "the sun gave forth its light without brightness, like the moon," according to a contemporary account. The resulting cold triggered crop failures and livestock deaths — and bubonic plague ("the Plague of Justinian"). One of several climate-related factors that trigger plagues is temperature drop. The weather has to fall below 20 degrees C for an epidemic to break out because that's the temperature at which the flea that feeds on humans, Pulex irritans, becomes active. During feeding, plague bacilli (Yersinia pestis) in a flea's gut are passed into the bloodstream of its human victims.

So that's the theory: A massive volcanic eruption in 536 AD led to the outbreak of bubonic plague which, in 547, spread to Celtic Britons living in the west of Britain while mostly sparing the east. This left all of England to the northern European invaders and settlers, which is why we speak a West Germanic language to day that is nearly untouched by Celtic.

Barry Evans (barryevans9@yahoo.com) would, despite everything, prefer to be alive now than in 536 A.D.