No Country for Old Young Men 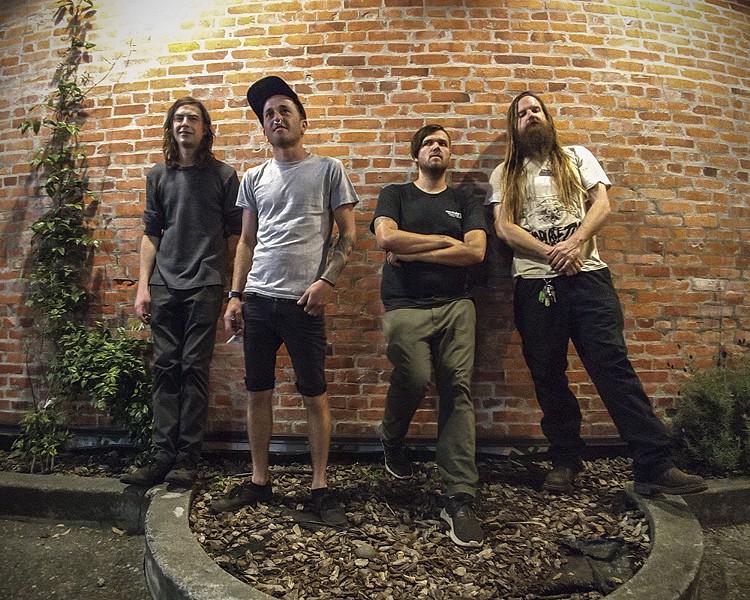 Photo by Katie Herbst, submitted The Bow-legged Buzzards play the Alibi on Friday, Aug. 23 at 11 p.m.

I'll admit I am a bit of a jerk. I try not to be but my heart is heavy. The first election I was old enough to vote in was Bush vs. Gore and since then it's basically been a backslide through unending war, recessions, bailouts for the financial industry and lately a gross turn toward nativist stupidity and general know-nothing-ness. Even Pope Francis, a far better man than myself, has been decrying the language of nationalism in politics by evoking the ugliness of Europe in the 1930s. So you'll forgive me if I say some upsetting things about the state of our world in an ostensibly upbeat local music column. I do hear the feedback of the community about my soapboxing and honestly, I have to plead no contest. This is who I am. But I can still take a shot at redemption. How about a poem by someone much more worn-out than myself, the poet-narrator of William Butler Yeats' "Sailing to Byzantium," who, finding himself "but a paltry thing/ A tattered coat upon a stick," wishes to renew his soul on a journey to the ancient seat of Christendom, "the holy city of Byzantium." That pilgrimage meant something very specific for the aging Yeats, perhaps we can find something like it for ourselves, here or elsewhere. Maybe even on this page.

Have a lovely week.

The Lyndsey Battle Trio will be playing at the Fieldbrook Winery at 6 p.m. today as a part of the continuing Harvest Concert Series. The music is free, however if you are interested in trying the local fare available while seated, table seating starts at $20 and reservations are suggested.

There is an excellent showcase of local talent at the Miniplex tonight at 9:30 p.m. Local folksters Blood Hunny will be joining up with surfy rockers Los Dum Bums and the spookily ethereal act Spirit Notes. This one's free so that late-month creaking noise coming from your wallet is no excuse to miss out.

Later on at 11 p.m. at the Alibi, you can catch hootin' strummers, slummers and fiddlers Bow-Legged Buzzards providing support for the heavy riffing trio Husky and the Slow Attack, which is inaugurating its Comin' in High 2019 tour tonight. The group has a deal with D'Addario strings to recycle old guitar strings so if you bring in your worn out wires the Slow Attack will send them out to be re-made and remodeled ($5).

Alt-country enigma and cross-genre genius Robbie Fulks is a very difficult songwriter to describe. From his origins on Chicago's influential punk-country label Bloodshot Records to his modern output, the man has played and written songs that individually shine but seem lightyears apart in style and temper. You could almost say that he is an interstellar artist, a sort of free agent with a fair amount of twang. Maybe forget my troubled attempt to define the man's output and instead check out his show tonight at The Old Steeple at 7:30 p.m. ($20). You'd be wise to show up because he will be joined by another incredible and similarly inscrutable talent, locally-raised violinist citizen of the universe Jenny Scheinman.

It's the last day of the second iteration of the Vert and Distort Festival at RampArt Skatepark today at 4 p.m. Today's local-heavy line-up will be headlined by White Manna and will also feature Ultramafic, Dead Drift, Imperial Destructo and many others. If you didn't snag one of the limited three-day passes for $35, today's show is attractively priced at $10. Rest assured, it all goes toward a good cause as the profits will be donated to Justice for David Josiah Lawson, named for the slain teenager whose unresolved killing looms horribly over our county and on the lives of his family and mother, who, by the time of this posting, will have been a speaker on Friday's festival inauguration.

It's the final edition of The Something Different Show at the Jam. The variety show is a mélange of performance art, interviews and music, with Isaac Bluefoot and the School of Dragonflower, Eureka City Councilmember Leslie Castellano, Jam owner and musical gadfly Pete Ciotti and tunes by Samba Da Alegria. It's a free show at 9 p.m. sharp.

Zzzzzzzzz. That's either the snoring of a large snoozing mammal or the membranous quad wings of a desultory honeybee. Either way, it's the only music you'll get on this lazy summer's day.

MC Frontalot, aka Damian Hess, is an early developer of the "nerdcore" style of hip hop, the ultra-referential and obsessive style of rapping that seems to be based on the following question: "What if Aesop Rock were even more annoying?" In its more than two-decade run it has garnered a fairly big following, which is more than I can say for anything I've done, so kudos there. If you want to check out Mr. Hess in action, come over to the Miniplex tonight at 9 p.m. The door's only $10 and the bill also features the work of talented dance-splosion and Brooklyn multimedia artist Miss Eaves, as well as the comedian and rapper Schaffer the Darklord, so this show has a lot of fun for your buck.

's Music and More grid, the Calendar and online. Bands and promoters, send your gig info, preferably with a high-res photo or two, to music@northcoastjournal.com.

Collin Yeo has been hearing a lot about Woodstock lately and he wonders if the generation whose motto often presents itself as "we changed the world" has any interest in taking a bit of responsibility for the shape the place is currently in. He lives in Arcata.